We have come to the end of the working week and for Friday's Feature I would like to show you My Favourite Picnic Painting which was created in about 1887 by one of Australia's most beloved artists Tom Roberts. The painting is titled A Sunday Afternoon Picnic at Box Hill. 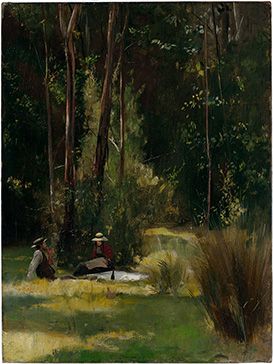 By 1882 a railway had been constructed between Melbourne and the township of Box Hill, and in 1885 Tom Roberts, Frederick McCubbin and Louis Abrahams first visited the area to paint. The artists set up camp on land owned by a local farmer and friend to the artists, David Houston. Along with other artists, including Arthur Streeton and Jane Sutherland, the group painted the local bushland.

In A Sunday afternoon Roberts depicts an intimate picnic. Framed by spindly gums and bathed in dappled light, a young couple relax in the bush, the woman reading to her companion from a newspaper. A belief in the health benefits of the country air was becoming popular with city dwellers who sought recreational activities in the bush or by the ocean. Roberts’s observant eye has resulted in such small details in this scene as the trail of smoke from the man’s pipe, the dark wine bottle on the crisp white cloth and the light falling softly on the leaves of the eucalypts. (Text © National Gallery of Australia, Canberra)

I love Tom Roberts (1856-1831) for many reasons not least of which is that he, like me, carries DNA from the glorious English county of Dorset which I have featured in some of my blogs.
>br> 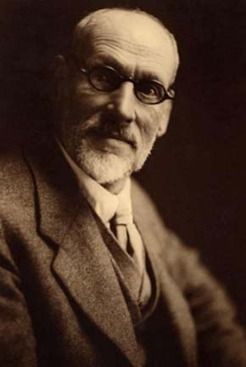 Thomas William (Tom) Roberts was born on 9 March 1856 at Dorchester, Dorset, England, elder son of Richard Roberts, journalist, and his wife Matilda Agnes Cela, née Evans. Tom was educated at Dorchester Grammar School. After her husband's death Matilda and her three children migrated in 1869 to Melbourne where they lived at Collingwood. The first years were difficult for a poor family and Tom helped his mother to sew satchels after work. He soon became interested in art and studied at the Collingwood and Carlton artisans' schools of design in 1873; at the latter Louis Buvelot and Eugen von Guerard awarded him a prize for a landscape. In 1874 he joined the National Gallery School where he attended Thomas Clark's classes in design. Though the school listed his occupation as photographer, his responsibilities at Stewart's, photographers in Bourke Street, were confined to arranging backdrops and studio sets and sometimes posing the sitters for portraits. (http://adb.anu.edu.au/)

But the main reason I love Tom Roberts and his paintings is that he was one of the very first painters to recognise the beauty and special atmosphere of the Australian bush. If I can't see, feel and smell the Australian bush I begin to get withdrawal symptoms. Fortunately I live in a Green Belt so I am surrounded by pockets of "bush" and I can be in the real bush with its towering gumtrees and golden lights within a very short time.