It all started with me researching iconic paintings of picnics. Manet started the trend, Monet joined in and Cezanne didn't want to be left out.

If you would like to check out yesterday's blog on the French Connection to Luncheon on the Grass ....Click Here.

And then in the late 1950s Picasso decided to get into the story. 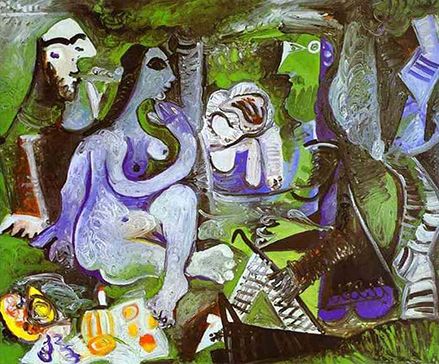 The painting Luncheon on the Grass by Édouard Manet was the starting point for an extensive series by Picasso, including twenty–seven paintings, one hundred and fifty drawings, eighteen maquettes, and five prints- taking him two years to complete the series from 1959-1961.(moma.org) 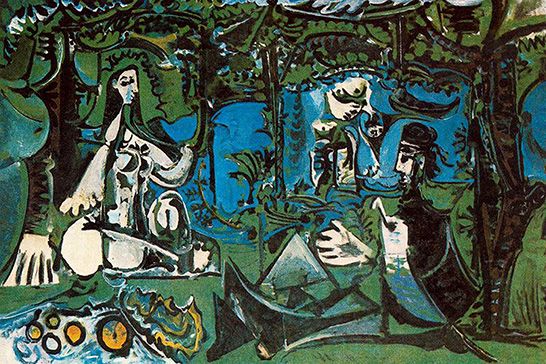 Picasso's variations are of an entirely different kind: he takes Manet's composition as a sort of springboard for his own imagination, which carries him into new, as yet unsuspected directions.

In the course of this work we find Picasso often straying far from his starting point, then coming back to it again, and inventing ever new variations on the theme. To Picasso, Manet's painting - like anything in art or nature - is a theme.

In the painting below (it is the last of one series of variations) Picasso retransforms the model into an Arcadian scene: instead of juxtaposing nude and clothed figures, we have here an idyl with four nude figures, shown near a pond in the subdued green light of the foliage. This brings to mind the themes of the Bather, and Figures on the Beach, which turn up so often in Picasso's works. But, via Manet, a new background has been added to these themes - the dimension of mythology - and the link with nineteenth-century painting has deepened the relationship between the figures, endowing them with greater tension and thus bringing them closer to the spirit of our own days.(pablopicasso.org) 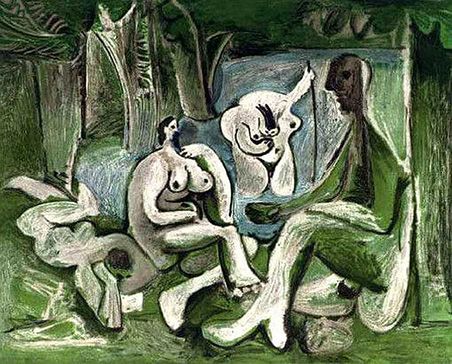 And then to my joy I discovered that our own National Gallery of Victoria owns a pencil drawing by Pablo Picasso of Luncheon in the Park. As this is my home gallery, one I am immensely proud of, I am rather chuffed that we can claim a mention in these delightful stories of paintings of picnics. 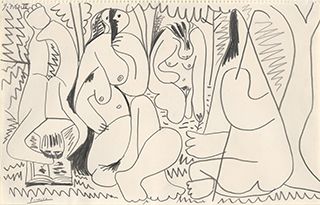 Like many artists, Picasso looked to the history of art for inspiration. From the late 1940s to the early 1960s he focused with particular intensity on individual works by past masters, making variations in painting, drawing, sculpture, and prints. The work of these historic figures had a catalytic impact on Picasso at a time when contemporary art—the various forms of Abstract Expressionism, for example—was going in directions counter to his own aesthetic concerns. (moma.org)

Across the ditch which exists between Australia and New Zealand live our "cousins" as we like to call them. To my delight I discovered New Zealand Artist Jacqueline Fahey(1929) has also painted a Luncheon on the Grass. 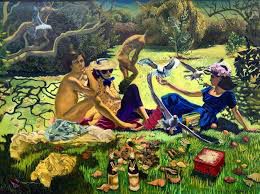 In her Luncheon on the Grass, Jacqueline Fahey presents a feminist reimagining of the celebrated realist painting Le Déjeuner sur l'herbe. Manet's scene is translated to a New Zealand picnic on the grass, set in the artist's garden at Carrington. Subverting the power dynamic of the original, which is so unambiguously governed by the male gaze, Fahey has clothed her two young women resplendently and it is the men who are naked. The figure in the foreground stares out at the viewer, both inviting and exposing himself to our gaze. His garments are strewn across the grass along with the remains of the picnic: an empty can, biscuit tin and two bottles of champagne.

Fahey invests this large scale canvas with a touch of the personal, as Manet's 19th century dandies are now the artist's daughter Augusta and her friend Lucy. Both these young women were preparing to start drama school in Wellington the following year, and in this scene they lean effortlessly into their theatrical selves. They are statuesque, posing. Everyone in this scene is an actor.

Fahey's work has been defined by the exploration of women's stories since the 1950s. We know it by the subtleties of looks, intimate moments, domestic barbs and affections she captures: details mined with love and attentiveness. In Luncheon on the Grass, the two young women are pouting, loosely mirroring each other's pose. Fahey holds us closely in their world which is enhanced by a fluid treatment of perspective and colour: the two female protagonists are boldly defined, while the men around them appear to fade into nature's muted background. (Reference: Jacqueline Fahey, Before I Forget Auckland University Press: 2012https://www.internationalartcentre.co.nz/)

On the 16 Nov 2019 The New Zealand Herald ran an article on Jacqueline Fahey now in her early 90s. If you are interested in reading Artist Jacqueline Fahey on love, feminism and the view from the kitchen table ----Click Here.

Telling the story of the paintings: Luncheon on the Grass by Manet, Monet and Cezanne - just to get you started.