Here on the AnArt4Life blog we like to showcase art in all its glory from the very most famous of works down to the small treasures that can be found in many of our homes: in some shape or another.

Before I hand you over to Pierre we have a new subscriber in A.T. from South Australia to extend a very warm welcome to.

Today the At Home Treasures are clocks which come from a collection owned by one of our subscribers who prefers to remain annoymous. To make the post a little more personal however we will call him Pierre from Nice because his love is for French four-glass clocks manufactured during the last quarter of the C19th.1

But first let's ask Pierre why he collects clocks.

I have been fascinated with mechanical clocks from an early age – my first memory was with an old bedside alarm clock which never worked again after I opened it up. I have moved on from there and most of the clocks I open up still work.

My passion is for French mantle clocks from the middle to late 19th Century. Many of the clocks from this period were very ornate and quite expensive. These ornate versions or the heavy slate and onyx cased clocks all shared similar round movements.

The round movements really attracted me because of their compact design and quality of finish – polished brass and “blued steel” – I couldn’t understand why these movements were hidden away in ugly cases.

So this is why I decided on the “Four Glass” clock which reveals the beauty of the movement and much of the action which is going on to keep time and chime the hours on gongs or bells.

The Four Glass clocks I collect all have mercury pendulums which are both attractive and functional. The mercury is in sealed glass vials and expands and contracts with changes in temperature - since these changes are opposite to the pendulum length changes - this maintains a constant centre of oscillation or mass. Pendulum length determines if the clock runs fast or slow - longer (slower) or shorter (faster). 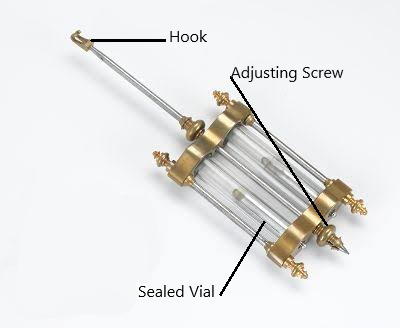 Maintaining mechanical clocks involves cleaning and oiling – sounds simple but there is more to it. First of all the movement needs to be removed from the case. Then dismantled for cleaning - all of the pivots (the bearing surfaces) need to be polished. The two main springs (time and chime) need to be removed from their barrels – springs can then be released cleaned and oiled and replaced in their barrels. The movement can then be reassembled and oiled. Special clock oil is required and only the bearing surfaces need oil. 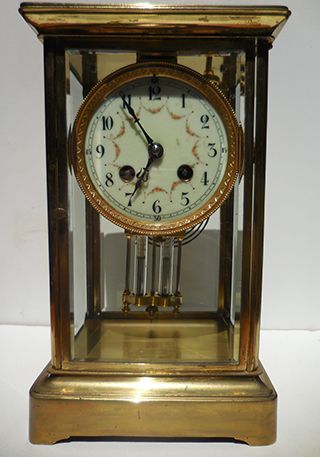 Then the best part for me is setting the clock up and regulating it. Pendulum clocks need to stand on a solid level surface. The clock needs to be in “beat” this requires the pendulum to swing evenly from side to side to receive equal force from the escape wheel. When the clock is in beat you can hear a firm Tick Tock not a Tickety Tock. To regulate the time keeping the pendulum length is then adjusted.

The basic French clock movements of this period were mostly mass produced by Marti and Japy who supplied most other makers with unfinished movements (blanc or ébauche) which required further work to complete – this is the reason why all French clock round movements of this period look similar. This is great for the collector since spare parts are readily available. These movements are small and very precisely made so it would be extremely difficult to make new parts. I have made some parts but also reused old parts to restore and even made up complete working movements. 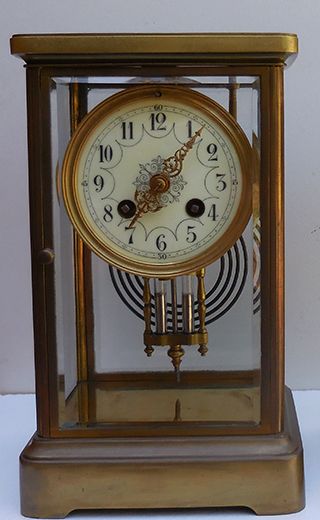 Tomorrow I am going to introduce you to my favourite clocks. Can you guess what they will be?

Follow this link to an excellent article by Ian Beilby if you would like to read more about the French four-glass clocks.

This fascinating article by Angela Keyworth introduces us to several more members of the Dexters of Melbourne, Derbyshire, especially Dudley Dexter Watkins (Image), creator of Desperate Dan in the Dandy. Credit: Angela Keyworth