In today's post on clocks from Pierre of Nice he is going to teach us a little more about carriage clocks - French Carriage Clocks.

The forerunner of Carriage Clocks were Officers Clocks which date back to the times of Napoleon Bonaparte when through his campaigns these portable clocks were carried by officers to coordinate battles. They were ideal for this purpose which involved a great deal of travelling since there is no pendulum which require a stable level surface to operate.

The carriage clock Gorge and Corniche cases were introduced in the mid C19th. They are simple yet elegant designs similar to the Four Glass clocks. The parts are all screwed together, making them easier to produce than the earlier one-piece styles.

These are the most common type of carriage clock case and were in production for around 100 years.

The carriage clock employs a Balance Wheel and Hairspring – the spring vibrates or oscillates at a known rate taking the place of the pendulum. The orientation of the balance wheel has very little impact on its ability to maintain correct time – similar to a mechanical watch on your wrist. 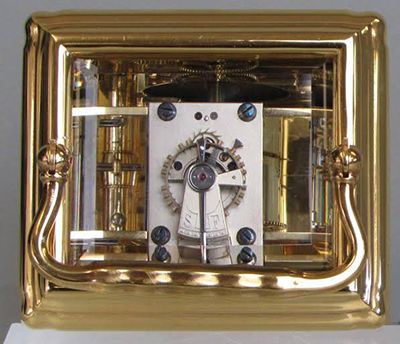 The later carriage clocks became more accurate due to the development of improved materials used to produce hairsprings and the use of jewelled bearings on the platform which supports the balance wheel and escapement. These are known as Platform Escapements and are produced in various sizes. The two main types used on French carriage clocks are Lever (as above) and Cylinder escapements. Lever is more accurate and reliable - is always used on the better quality clocks.

My clocks keep excellent time for mechanical movements. This is testament to the quality build of these small portable clocks which are over 130 years old. The accuracy can be attributed to the jewelled lever platform escapement which can be viewed through the top glass.

The French Carriage clock makers of this period catered for all tastes and budgets with many variations of styles and functions. As you can see from the examples below, some are very ornate.

My preference is for elegant simple design like my two clocks below. The Gorge is a miniature Time Strike movement with a plain white enamelled face. The Corniche is a larger standard size with a cream ceramic chapter ring and it does have an extra function. This clock is known as a Repeater - if the small button on the top of the case is pressed it will strike the last number of hours on the gong. There were no electric lights to switch on to see the clock face 130 years ago! 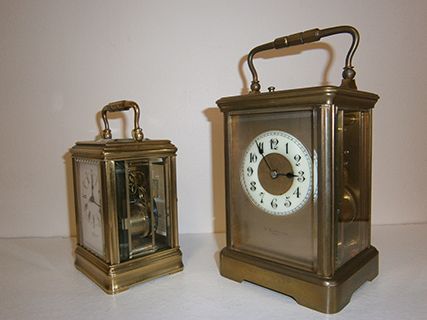 Carriage clocks are often stamped with only the retailers name on the face and the back plate of the movement. The makers stamp can sometimes be found out of sight on the inside of the plates – one of my clocks is stamped AM on the inside. This is probably the stamp of Margaine who were well known carriage clock makers.

The value of carriage clocks depends on a number of factors – such as maker, age, quality of construction, complexity of movement and artistic design and how rare the piece is.

The basic clock is time only or time and alarm function next would be time and strike on bell or gong. Then we start with complexity with functions such as repeat last hour, repeat last hour and quarter even calendars.

There can be no doubt that Carriage Clocks are beautiful and special as you can view from different angles. Even if you don't understand the complexity of the movement they can still be fascinating to watch. Below are multiple angle views of the Miniature Gorge Carriage Clock by J. W. Benson, London, 1890.

Below are multiple angle views of the Standard Corniche Carriage Clock made by Wm. Batty, Paris, 1890. Even though the clock carries the Paris stamp William Batty was a Manchester Jeweller and Clock Maker.

If you would like to understand more about the inside workings of a clock you can watch these videos which show the difference in movement between the Lever Escapement and the Cylinder Escapement.

If you love clocks this post is for you. It brings you a selection of "French Four-Glass" clocks from the last quarter of the C19th. The clocks belong to "Pierre" so you will also get an insight into the passion of a clock collector. Photo: Pierre