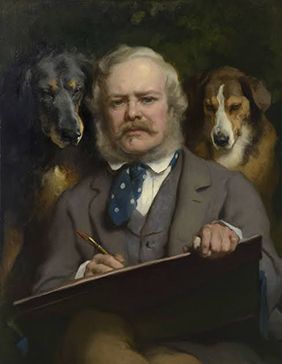 The Connoisseurs: Portrait of the Artist with Two Dogs by Sir Edwin Landseer (Arthive.com)

There is no doubt in my mind that an artist's best friend is a dog. And there is also no doubt that Sir Edwin Landseer as shown above is my favourite painter of dogs.

Or maybe it's now Alan Weston who created the oil painting below of Jack Russell. 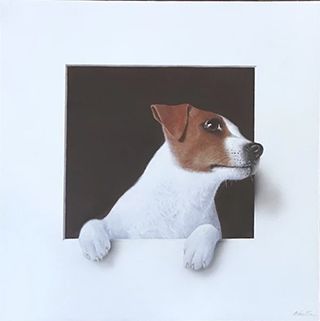 Recently I received as a present a beauitful book titled Dogs in Art by Susie Green. My favourite painting in the book is the one that adorns the cover. It is titled Head of a Dog and is attributed to Nicolas Toussaint Charlet (1792-1845), a French painter and printmaker, ironically known especially for his lithographs of military subjects. But today we will enjoy the only painting he produced of a dog. I believe the painting hangs in the Rijksmuseum, Amsterdam.

Dogs have been with us of course since civilisation began and to a great extent have helped us along in so many ways as pointed out by Susie Green in her description of the role of the dog in human history.

She hunts, she retrieves, she moves heavy loads, she guards houses and babies, she herds everything from turkeys to sheep and can lead her master to a trapped or lost beast, she is the eyes of the blind...and the ears of the deaf, she may rescue the drowning and her incredible sense of smell allows her to detect cancers and locate those buried alive when builidngs collapse, her coat may be used as wool, she races for our pleasure and acts as a status symbol... Above all she is the loyalist of friends and the most steadfast of companions... (Dogs in Art, p8)

From the earliest of times Images of Dogs have featured in so many ways. Here is a beautiful Two Dog Palette from Southern Egypt (Hierakonopolis) carved in stone more than 5000 years ago emphasising the esteemd position held by these wonderful creatures. When next in Oxford, Uk you can visit the Ashmolean Museum where it is on exhibit.

And while we are speaking of Ancient Egypt we must take time to appreciate this wonderful statue of Anubis who had several functions in protecting the dead. This statue was found in the tomb of Tutankhamum.

The statue of the Anubis, depicted completely in animal form as a recumbent jackal, was attached to the roof of the shrine. The statue is made from wood, covered with black paint. The insides of the ears, the eyebrows, and the rims of the eyes, and the collar and the band knotted around the neck, are worked in gold leaf. The whites of the eyes are made from calcite and the pupils from obsidian. The claws are in silver, which was more valuable than gold in Ancient Egypt.(en.wikpedia.org)

Susie Green introduces us in Dogs in Art to the Graeco-Roman mosaic work which she points out was refreshingly lively. Below is The Alexandra Dog made in about 200-150 BC and, as Susie Green points out, it has been as skilfully rendered as it would have been if painted as an oil painting by one of the Old Masters.

Moving a few hundred years on I want to conclude today with The Townley Greyhounds which in my opinion is one of the most beautiful dog sculptures. It was found at Monte Cagniolo (Dog Mountain) to the southeast of Rome in 1774.

I will quote the words of Susie Green to give you an appreciation of this wonderful work.

The subtle carving renders their physical presence perfectly but more than this the sculptor has captured the sweet tenderness of their emotions: the gentleness with which the bitch nibbles at the dog's ear, one paw placed on his back; the dog's head caught just as he turns to his mate. These are no imaginary dogs, the detail and expression is too knowing, too intimate. They must surely have been the sculptor's own hounds or at least ones he knew well. (Dogs in Art p.22)

But who is this little fellow who has snuck into the Dog Blog? I don't remember him being in the book Dogs in Art by Susie Green though he should be as Nicky is awfully cute and as you can see desperate to be noticed!

Nicky is a timely and wonderful reminder that from the earliest of times until the present dogs are an essential part of our lives.

I will be back with more from the book Dogs in Art by Susie Green.

Akaroa - nestled in a beautiful sheltered harbour, surrounded by the volcanic hills of the Banks Peninsula, colonised by the French.The garden at the Giant's House was the highlight and a sight to behold. When owner/artist Josie Martin