A very warm welcome to our latest subscriber R in Canada. Jane, Caroline, Julie and I love researching and writing for the blog and to know that our followers are growing at a very respectable rate is a firm indication that we are providing interesting information that will help all of us gain an appreciation of art through life.

If you have just joined us, the focus at the moment is on Matisse and Picasso stimulated by an exhibition in Canberra.

After spending more than a couple of hours taking in the paintings of Henri Matisse and Pablo Picasso I am left with the question: Which paintings do I prefer? Which artist do I prefer? Matisse versus Picasso?

I am in agreement with Clive Bell who said:
“The painting of Matisse is a pure and simple delight”, whereas Picasso “requires intellectual effort”. (newstatesman.com)

Some of the younger subscribers might ask who is Clive Bell? He was an art critic and part of the Bloomsbury Group. He developed the art theory known as significant form to describe the idea that the form of an artwork or forms within an artwork can be expressive, even if largely or completely divorced from a recognizable reality. Bell was married to Vanessa Stephen, sister of Virginia Woolf. (en.wikipedia.org)

But back to Canberra and the exhibition.

The exhibition aims to highlight the artistic relationship between Matisse and Picasso. I think this poses a very interesting question which permeates the world of artists who are/were very much focused on their own perception of the world. They have to be; that is the nature of their vocation.

We go to an exhibition, we visit a gallery, we read a book, we search the net to review and appreciate images we find pleasing, challenging, stimulating or downright appalling. Don't forget: each artist is usually determined (or at the very least hopeful) of their works being noticed above those of other artists.

But how often do we think of artists as human beings and not creative machines? What do "they" talk about when they meet up with their contemporaries? What relationships exist/existed between these beings that have to be competitive to survive? Below is a "social event" of some kind with Picasso and Matisse very much in focus. What are they discussing?

Recently Julie introduced you to Marie Bracquemond and how she gave up painting mostly because (it has been deduced) her husband didn't like the style she used, and was also most probably jealous of her talent. What did they talk about to each other? What was their relationship like especially as her husband was also an artist?

Very soon, Julie is going to share her research into Mary Cassatt and also begin to try to unravel the relationships that might have existed between Mary Cassatt, Berthe Morisot and Marie Bracquemond, probably the three most talented of the female Impressionists.

But today is about the friendship and fierce rivalry between Henri Matisse (1869–1954) and Pablo Picasso (1881–1973) who met in 1906 and for more than half a century followed each other’s creative developments and achievements. The sustained rivalry between them was not only key to their individual success, it also changed the course of 20th century Western European art. (nga.gov.au/matissepicasso)

Henri Matisse is widely regarded as the greatest colorist of the 20th century and as a rival to Pablo Picasso in the importance of his innovations. He emerged as a Post-Impressionist, and first achieved prominence as the leader of the French movement Fauvism. Although interested in Cubism, he rejected it, and instead sought to use color as the foundation for expressive, decorative, and often monumental paintings. As he once controversially wrote, he sought to create an art that would be "a soothing, calming influence on the mind, rather like a good armchair." Still life and the nude remained favorite subjects throughout his career; North Africa was also an important inspiration, and, towards the end of his life, he made an important contribution to collage with a series of works using cut-out shapes of color. He is also highly regarded as a sculptor. (theartstory.org/artist/matisse-henri)

From the exhibition the painting that for me represents Matisse's unbridled use of colour is his Notre Dame painted in 1904 just before he met Picasso.

There are two pieces of information I want to add about Matisse and colour.

Russell introduced Matisse to the work of Paul Gauguin (1848-1903) and Vincent van Gogh (1853-1890). Matisse would later say, “Russell was my teacher, and Russell explained color theory to me.” Due to van Gogh’s influence Matisse started painting with more speed and color intensity.

In his painting, Fruit and Coffeepot (1898), we can see the influence of these post-impressionist artists on Matisse. 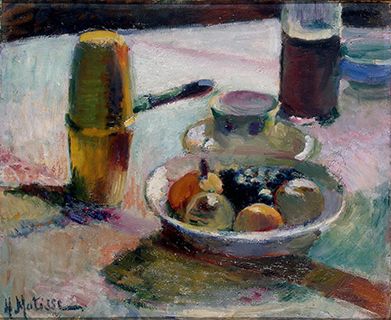 In this painting the artist uses light to draw our attention into the picture plane. Matisse intensifies color by reflecting it on the objects and the shadows on the tablecloth. In this painting we see his brushwork is similar to that of van Gogh’s kinetic mark making. In 1897, Matisse met Camille Pissarro (1830-1903), who introduced him to the work of Paul Cézanne (1839-1906). From studying Cézanne’s work he learned how to let go of the details and allow the color to become the dominant factor. (musings-on-art.org/matisse-henri-decoding-his-color)

Please note: the above painting was not in the exhibition but I have included it as it helps illustrate Matisse's use of colour and light.

Picasso on the other hand:

With a career that spanned 79 years and included success in painting, sculpting, ceramics, poetry, stage design, and writing, his tendency to experiment with his craft is unsurprising. However, the extent to which his style changed in each discipline—particularly, in painting—is unlike that of any other artist. Therefore, in order to trace his stylistic evolution, his body of work is often divided into periods: early work, the Blue Period, the Rose Period, the African Period, Cubism, Neoclassicism, Surrealism, and later work. (mymodernmet)

For me, Matisse is all about colour whereas on the other hand Picasso is about line, fractured lines even when the colour is startling as shown below in Woman from Arles (Lee Miller) [L’Arlésienne (Lee Miller)] painted in 1937. 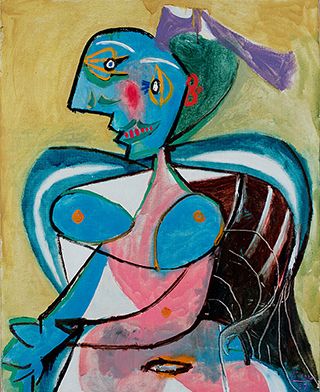 And so what might Mattisse and Picasso be discussing over luncheon as shown in the photo above? The topic of conversation could very well have been about Paul Cezanne because he is considered to be the bridge from late 19th-century Impressionism to the early 20th century's new line of artistic enquiry - Cubism.

Even though both Matisse and Picasso are said to have remarked that Cézanne is the father of us all, they had different interetations of Cezanne's contribution.

For Picasso, Cezanne's work signaled a way to celebrate the bold, then ugly and the dismembered. (NGA Exhibition Booklet)

This led Picasso to experiment with his new style Analytic Cubism. 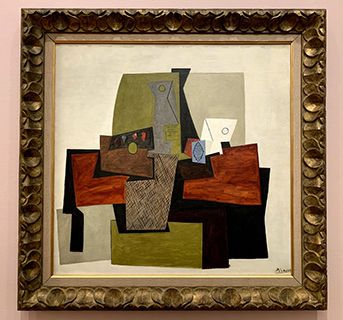 Woman in an Armchair No 1 by Pablo Picasso

Matisse on the other hand believed that Picasso crassly misread Cezanne's intent and found his style alienating, referring to it disparagingly as an art of 'little cubes'. He embraced Cezanne's idea that subject and backgrouond were of equal importance, and that colour could evoke a sense of space. (NGA Exhibition Booklet)

In the painting below Still Life with Oranges Matisse has used a very simple colour scheme.

The vivid orange and yellow hues on the back wall, echoing the colors of the fruit, give the effect of an intensely sunlit room, but the curtain and outdoor view through the window in the upper right are vague, almost abstract forms. Matisse's handling anticipates his later emphasis on flat, decorative colors and forms while also pointing toward modernist experimentations with its unfinished quality, loose brushwork, and flattened, abstracted imagery. (kemperartmuseum.wustl.edu/) 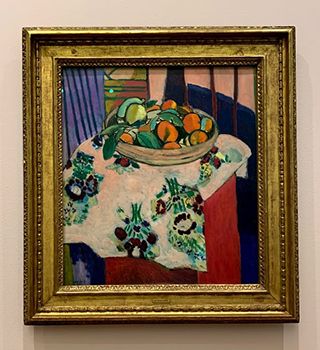 Tomorrow we will continue to look at these two greats from the world of art and learn that although their relationship took place in a boxing ring they had enormous respect and affection for each other.

Jane and I have been to Canberra to see the Matisse and Picasso Exhibition. But following on from our Bee Week, today I wanted to show you Matisse's "Bees" creation which was part of the "cut-outs" used by Matisse to design the Chapel of the Rosary in Vence, France.