I do like to segue neatly from one blog to the next. Sometimes we can't do this but today I am able to delicately move from our week on bees to Henri Matisse and Pablo Picasso.

Why am I mentioning these artists? Because Jane and I have been to Canberra and have just seen the Matisse and Picasso Exhibition.

Here is Matisse's painting Bees that will act as a gateway into a totally different mood and purpose.

Matisse's Bees creation (Original Title: Les Abeilles) was produced in 1948. It's large being 101 x 241 cm. It hangs in the Musee Matisse, Nice.

The Bees was produced as part of Matisse's cut-out designs created for the windows Matisse made for the The Chapelle du Rosaire de Vence (Chapel of the Rosary) also referred to as the Matisse Chapel or the Vence Chapel. It is a small Catholic chapel located in the town of Vence on the French Riviera and dedicated to the Dominican Order. The church was built and decorated between 1947 and 1951 under a plan devised by Henri Matisse. It houses a number of Matisse originals and was regarded by Matisse himself as his "masterpiece". (en.wikipedia.org)

If you are interested in art styles Bees was created in what would be termed Abstract Expressionism but more on Matisse's styles later though note the work does have a cubist composition, a style (created by Picasso) and largely rejected by Matisse.

The Bees, a composition that isn’t strictly speaking a cut-out at all, because it assembles squares. The bees – two continuous arcs, trajectories that suggest flight – are made up of two black squares for the body, and either three white squares for the wings, a pair and a single, or four white squares. The economy here is breathtaking – particularly as the bees are also nuns seen from above in their habits. The other squares of colour are flowers, yellow, red, blue and beige-pink, with the pollen yellow dominant. You only realise after a time that the fecundity forms a radiating fan shape. (newstatesman.com)

But what brought Matisse to creating cut-out works such as Bees?

The answer is simply - the challenge of rising above the impediments brought on by illness and old age. 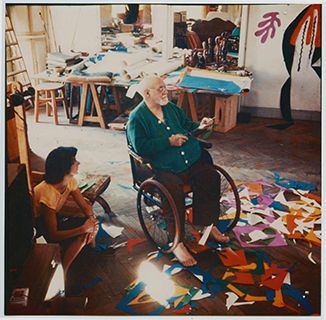 Bees swarm, swallows swerve, a shark swims the wall ... with a pair of giant dress-making scissors, Matisse cut himself free from the miseries of illness and old age, creating luscious cut-outs that unleashed a new art. (theguardian.com)

The most famous of the cut-outs produced by Matisse is probably Icarus of which I have found at least two versions. 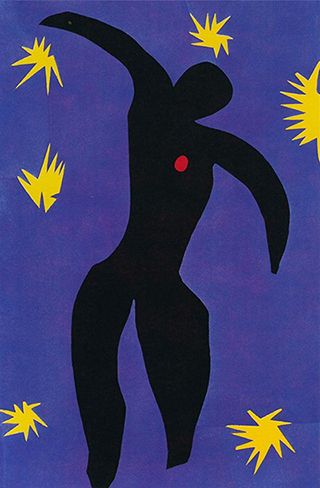 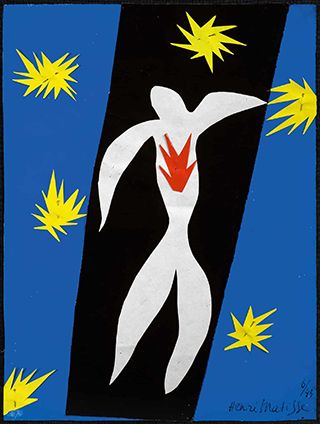 Icarus looks so simple and must surely have been easy to make. To gain an understanding of Matisse's Painting with Scissors style and how difficult it is to execute, please watch this video from Youtube.

And thanks to the wonders of the internet you can now visit the Tate Exhibition of Matisse's Cut-outs (on show in 2014) by watching the video below and learn a great deal more about the thinking and physical processes that Matisse employed.

Matisse came from an ancestry of weavers and these cut-outs were a direct way he could connect with his past which is often the key to creating masterpieces.

For further reading:
Adrian Searleback Henri Matisse: The Cut-Outs review – 'how rich, how marvellous, how alive'.

Tomorrow we take a closer look at the Exhibition which highlighted the artistic relationship between Matisse and Picasso.

Sharing some images from the National Arboretum Canberra. Also publicising an exhibition by poet and artist Belinda Broughton who lost her home in Lobethal (Adelaide Hills), South Australia. Announcing an exhibition on the relationship of trees to us being held at the Hayward Gallery, London