Although much smaller than the mansions we have covered so far, with a mere 33 rooms, Rippon Lea is quite a gem, set within 14 acres of gardens and located 7kms from the Melbourne CBD.

It is also 7kms from my home and I have enjoyed the pleasure of visiting it many times – sharing guided tours of the house with my interstate friends and enjoying afternoon tea, taking a seat in the elegant ballroom listening to intimate piano recitals; lounging on the lawns for teddy bear picnics, attending plays as diverse as Alice in Wonderland and Lady Chatterley’s Lover, with each scene located in an appropriate setting in the gardens.

Details below are taken from Ripponleaestate.com.au as well as National Trust publications: The House at Rippon Lea and The Garden at Rippon Lea.

Although he engaged the architectural firm Reed and Barnes, Rippon Lea was the creation of Frederick Sargood - heavily involved in its construction and concerned with the design and redesign of the garden (by a still unknown landscaper of great genius). As Sir Frederick's wealth increased, selling soft-goods on the goldfields, so did the house. The style at Rippon Lea is indicative of the tastes and preferences of C19th Melbourne using polychromatic Lombardic style brickwork on a grand scale.

Frederick Sargood was elected to the first Australian Senate in 1901. While on a trip to New Zealand he became suddenly ill and died in January 1903. His widow sold the house and returned to England. In addition to the sale of the property and the furniture, there was a special auction of the potted plants and orchids that were Sir Frederick’s pride and joy.

The property was purchased by a syndicate headed by Thomas Bent who became Premier of Victoria in 1904. Bent only used Rippon Lea for entertaining and charity events. He began subdividing and selling off some of the land, although he was careful to maintain the garden. Bent was forced from office in 1908. He died the following year while under investigation for involvement in land scandals. His death saved Rippon Lea from further subdivision.

In 1910 the property was bought by Benjamin Nathan, again a self-made man, who made his money in the furniture business. He moved to Rippon Lea with his wife and two daughters. He returned the house to a family home and continued with charity events such as those in aid of WWI-related causes. Like Sargood he was very interested in the garden, especially orchids.

Nathan died in 1935. His elder daughter Louisa (Lulu) inherited the property. Married to lawyer Timothy Jones, she had four children and modernised the house - influenced by Hollywood movies of the time.

A new kitchen was built on the ground floor, the dining room was remodelled; modern, green tiled bathrooms were installed; the original ballroom was removed and replaced with a swimming pool; the billiard room and museum converted into a new ballroom. The colour scheme was made much lighter and rooms were de-cluttered - presented in an elegant, neo-baroque style as made popular by Barbara Beaton (a well-known English socialite and sister to photographer Cecil Beaton). The house was famous for entertaining and charity functions. Parties were held by the pool.

After her husband died, despite selling off some of the land, Mrs Louisa Jones, realised a domain of this size would be impossible to retain intact. In 1963 she agreed to live out her life at Rippon Lea and upon her death, the house and land would pass to the National Trust of Australia (Victoria). Her father had also wanted to see the gardens protected. Her children approved of these arrangements.

The Rippon Lea we see today is a tribute to Mrs Jones’ generosity as well as her tenacity in preserving the property.

Rippon Lea was opened to the public for the first time on Friday 22 February 1974 and 100,000 people walked through the doors in the first three months. Visitors could see peacocks roaming the grounds while geese, swans and other water birds populated the lake.

The furnishings have been retained as has much of Louisa’s (Lulu) wardrobe – the volunteers add special touches throughout the year – a tree and decorations for Christmas, some of Lulu’s hats during the Spring Racing Carnival and Melbourne Cup in November or luxurious evening gowns – easy to imagine Lulu poised with an elegant long cigarette holder greeting equally well dressed guests.

Have you read any of Kerry Greenwood’s books featuring the glamorous amateur detective Phryne Fisher? She has an exotic Chinese boyfriend from a rich silk merchant family and is held in high regard by Inspector Jack Robertson as they solve murder mysteries. They are light hearted and fun to read.

The stories are set in Melbourne and around Victoria in the 1920s and a TV series has been made. Some of the scenes were filmed at Rippon Lea. A few years ago an exhibition of sets and costumes from the series was displayed at the mansion and sometime this year another exhibition is due – titled Miss Fisher and The Crypt of Tears, based on a recent movie.

No peacocks, geese or swans these days – however we can easily slip back to these times – open your parasol or straw boater to join me in this relaxing tour of the gardens. At the end are some images of the house.

Our next mansion is steeped in Buddhist history - high in the Himalayas. 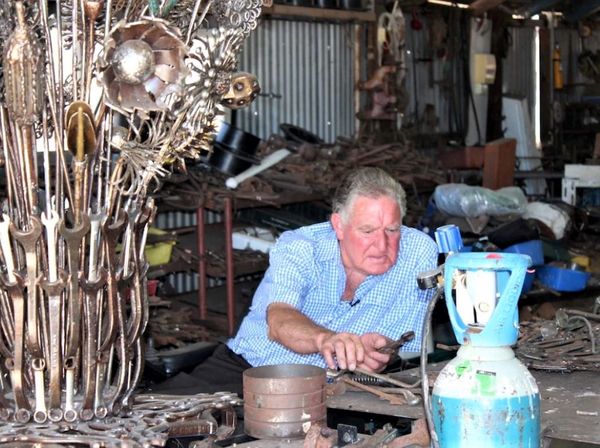 Today we look at the extraordinary sculptures of an extraordinary man in a small country town - known as The Spanner Man! Image: Courtesy of Emily Stewart