Yesterday we mentioned J from Newstead, Central Victoria, has beehives on her property.

In conversation with Caroline, J said: you never stop learning, with bees! J brought our attention to a book The Life of Bees by Maurice Maeterlinck(originally published in 1901) and J has the 1912 edition. She suggests the book “is part whimsy, part acute observation and interesting to read in current times.”

As an aside, Maurice Maeterlinck was awarded the Nobel Prize in Literature in 1911. Maurice writes "no living creature, not even man, has achieved in the centre of his sphere, what the bee has achieved." From their amazingly intricate feats of architecture to their intrinsic sense of self-sacrifice.

Today bees live all over the world and there are approximately 20,000 species.
As well as crop pollination, scientists believe that bees are responsible for the rich flower diversity we enjoy today.

Most flowering plants cannot self-pollinate and pollination that relies on the wind to carry their seed is not very efficient; so flowers evolved with bright colours and markings to attract bees and to ensure that they were rewarded for the pollination service, the bees were provided with nutritious nectar. The bees drink the nectar and transport it in a special stomach back to the hive to share with the Queen and to feed the hive bees and the larvae which will become the new bees. 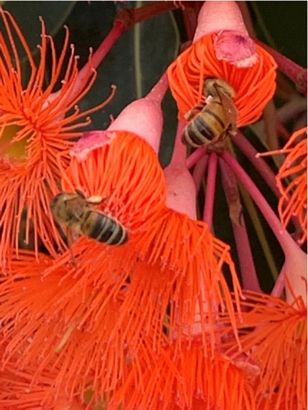 Fast forward to 2020 and bees are under threat from industrial agriculture, parasites/pathogens and climate change. The loss of biodiversity, destruction of habitat and lack of forage due to monocultures and bee-killing pesticides are threats for honeybees and wild pollinators. (Credit: sos-bees.org)

Those of you who live in Australia may know the ABC (Australian Broadcasting Corporation) reported that during the devastating fires on Kangaroo Island about a quarter of the beehives (approx. 1,000) may have been lost in the bushfires that devastated the western half of the island. This island, off the coast of South Australia, is home to the world's purest strain of Ligurian Honeybees, which originally came from Italy. Bees and honey are not allowed to be brought onto the quarantined island, in order to protect the Ligurian strain. 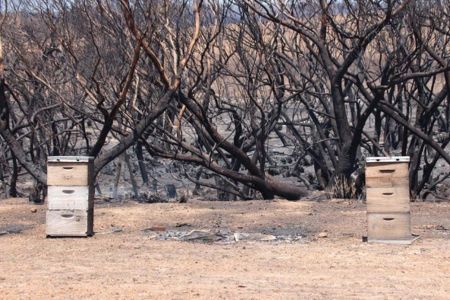 To highlight the plight of the bees, there is a groundswell from individuals learning the art and science of beekeeping such as J from Newstead and artists across the globe are highlighting the dire situation by creating attention in unique ways.

From a modest painting by an anonymous artist in a local café. 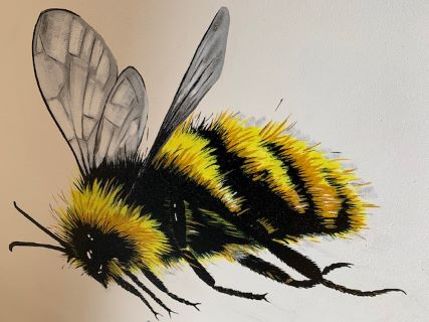 To this incredible sculpture by British artist Wolfgang Buttress, made of 170,000 pieces of aluminium created into a hive-like structure of latticework, controlled by the vibrations of honeybees in a hive at Royal Botanical Gardens, Kew (London) that is connected to the sculpture. (theguardian.com) 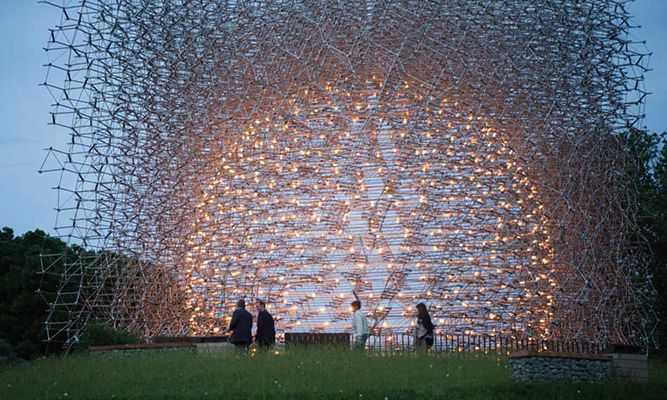 And then there is the ambitious initiative Good of the Hive by New York based mural painter Matthew Willey with the goal to paint 50,000 honeybees, reflective of the number necessary for a healthy beehive.

Willey's project aims to help raise awareness about the importance of honeybees to the environment.

As well as highlighting the issue of the declining honeybee population, the project aims to celebrate the incredible and unique behaviour of the insects. Matthew said that the subject of his murals also acts as a metaphor for communities, showing the importance of how people collectively work together and share environments.

For anyone interested to know more about the Australian native bees with wonderful names such as the Blue Banded Bee, Teddy Bear and Cuckoo Bee, (and who wouldn’t want to), follow this link to bees.

We at the blog are an optimistic team and hence would like to finish with some positive steps especially for city dwellers outlined by J from Newstead - steps that we can take to help increase the bee population.

A key thing is that people don’t have to get their own hive to support bees … just planting some bee friendly plants in the garden will help enormously and in fact urban areas and cities can have a greater and more diverse year round flow of nectar and pollen compared to rural places.

Having water sources helps birds and bees, a good bowl or birdbath with a tea towel or pillow slip on it will stop bees drowning and allow them to suck up the moisture through the fabric. Or put stones and pebbles and sticks for them to alight on, crawl in and out from. Critical on hot days as they can’t travel that far in heat.

If people are considering a hive or two of their own, be prepared first - attend courses, join a bee group, get a mentor, read and watch videos. You wouldn’t buy a herd of cattle or run a horse stud without doing the study and training to become confident and competent. Bees are no different - they are livestock and require the owner to take responsibility for their welfare. Plus, you must be registered, by law, to keep bees. Even more important as we face the threat of varroa mite and other exotic diseases.

If you live in Australia, check out this link if you want to create a Bee Friendly Garden.

There is, of course, a very strong move to bring bees into the centre of cities such as Paris, London, Toronto, San Francisco, New York, Hong Kong, Melbourne and many others. So to conclude today take a Youtube tour around the rooftops of Paris wich are being turned into Homes for Bees.

If you live in the UK, USA, the Philippines, Hong Kong, Brazil - some of the homes of our subscribers - get on board and search the net for how you can help in your locality, please let us know if you have a bee story from anywhere in the world.

Here we first explain the meaning of 'bee space' and then go on to explore the notion of bees as members of the family who were informed of events such as births, marriages and deaths through the tradition of 'Telling the Bees.