On Day Two of Bee Week we are going to learn more about Bee Hives and their intricate and fascinating design. We also have another subscriber to welcome to the blog - M.R in Melbourne. We do hope you like bees because they are very much in focus this week.

A breakthrough discovery in beekeeping was made in the mid 1850s by a man called Lorenzo Langstroth. He discovered that bees would keep a 'bee sized' pathway clear within a hive if it was between 6 and 8mm wide. He named the discovery spazio di ape or bee space.

This discovery was important because it led to the development of hives with moveable frames of comb. This allowed the beekeeper to remove comb and honey without destroying the hive. It also enabled the beekeeper to start manipulating the colony; helping it develop and grow. This discovery is often cited as the start of modern beekeeping. (www.omlet.us) And Langstroth's Classic Beekeeper's Manual led the way. 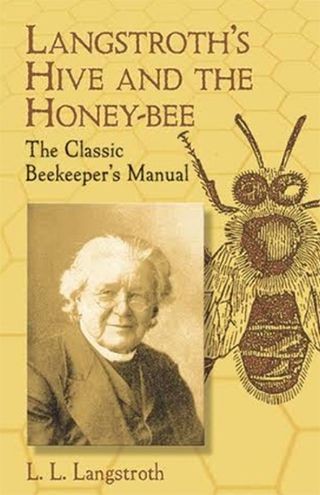 Langstroth’s Hive and The Honeybee the Classic Beekeepers Manual (Credit Dover Publications Inc. 1st printed in 1853 and has had over 40 editions)

Below is a photograph illustrating bee space which, if the space between two surfaces is the right size, the bees will leave it free so that they can use it as their exist and entry passageway. 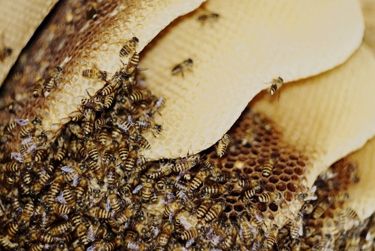 In modern times apiarists build frames within the hive to act as the bee space. But if the bees don't have these frames and are left to their own devices, they will create their own bee space and quite remarkably in a most intricate and artistic way. The heart shaped honeycomb shown below proves just how intelligent and artistic these remarkable little creatures are.

This work of art was created by the bees at Bodiam Castle in Robertsbridge, United Kingdom. 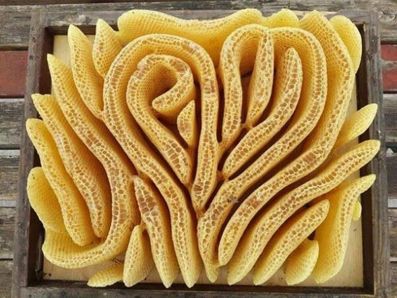 As we frequently emphasise in our blog, art is far more than illustrations portraying emotions or ideas: through art we learn about life. After Langstroth published his Beekeeper Manual, bees started to become more intimately part of our daily lives as shown in this delightful painting The Bees' Friend painted in 1863 by Hans Thoma. 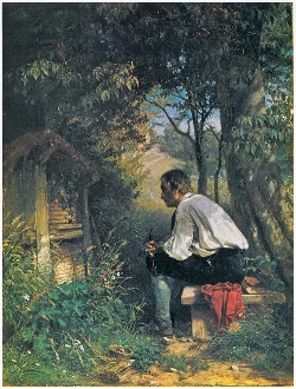 A British tradition that was held by some beekeepers was referred to as Telling the Bees. This involved informing the bees of any important family events like birth, marriage or death.

Beekeepers would often leave small offerings like wedding cake or small sweets for a birth and drape the hives with black cloth or turn the hives away from the house upon death. It was said that the bees would either die or leave the hives if not told of the death of their keeper. This tradition was brought to the Americas by immigrants in the 19th century. In Mark Twain's Huckleberry Finn, he wrote:

“And he said if a man owned a beehive and that man died, the bees must be told about it before sun-up next morning, or else the bees would all weaken down and quit work and die. Jim said bees wouldn't sting idiots; but I didn't believe that, because I had tried them lots of times myself, and they wouldn't sting me.”
(Credit: strathconabeekeepers.blogspot.com/)

The tradition of telling the bees may have its roots in Celtic Mythology, which holds that the presence of a bee after death signifies the soul leaving the body, linking the bees to the spirit world. (Credit: apiarymade.com.au) 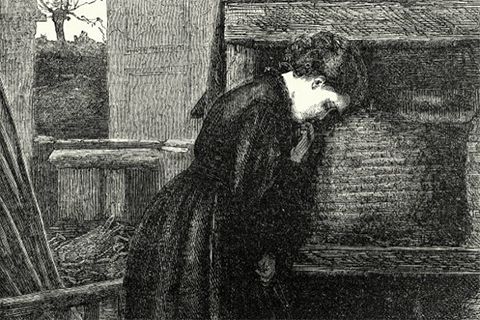 The head of the household, using the key to their home, would softly knock three times on the hive in order to get their attention, then pronounce, in a low soft voice, the name of departed. The goodwife of the house could also announce a passing by putting a black fabric or crepe over the top of the hive and then humming a quiet tune, ending with the announcement of the passing and the person’s name.
(Credit:greatlakesbeesupply.com)

Below is an illustration of a woman placing a black crepe over the top of the hives as she informs them that their master is dead. 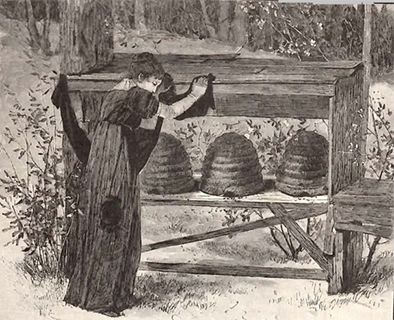 And (below) in Telling the Bees Charles Napier Hemy portrays a widow and her son telling the bees of a death in the family, painted in about 1895. 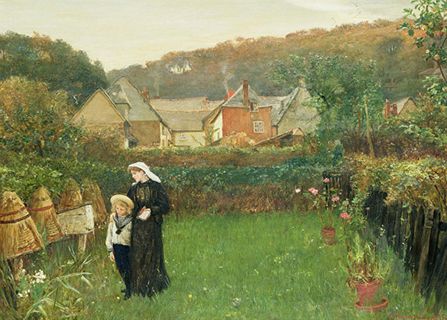 The words Went drearily singing the chore girl small on this old print of a young girl draping the beehives with black crepe on the death of the beekeeper illustrates poignantly how the bees were extended members of their owner's family and kept informed of any family news in the household. 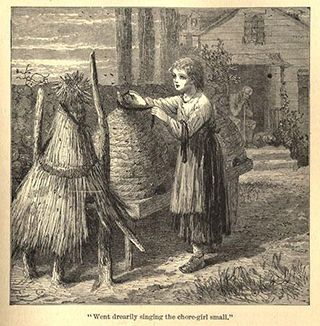 Bees were considered to have a special intelligence regarding the mysterious unfolding of the universe. For this reason, their behaviour was closely observed. Swarming bees were a cause for attentiveness: If they clustered around a dead branch, a human death was imminent. If they flew into a house, a stranger would soon call. If they rested on a roof, good luck was on its way. The reciprocal relationship between humans and bees was so important that the activities of bees were taken very seriously. In turn, it was observed that if there was discord within the resident human community, the bees would stop producing honey, die, or fly away. (Credit: blog.sevenponds.com/)

Tomorrow we are going to talk about the plight of bees and how we can help save bees from extinction because without them the world will be in a sorry state.

A subscriber of the blog J from Newstead in Central Victoria has recently commenced on a journey with bees and hives. Here she shares a photo of a swarm of bees on her property. On a following blog J will give us a few tips as we can all help bees to thrive. 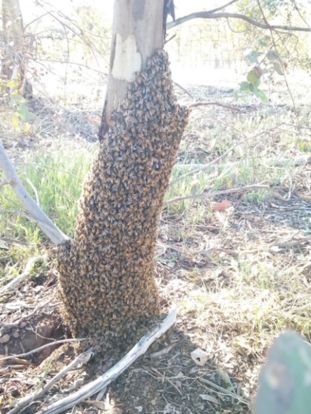 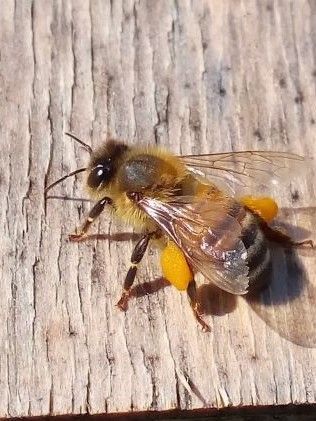 As this is the first Bee Blog Caroline and Anne take you back to the earliest recorded bee which is 100 million years old. From there we move forward to bees in Ancient Egypt and the Middle East and conclude today with Napoleon's obsession with bees and their symbolic significance.