What has happened to the painting of the Macedonian Shepherd?

If you have just joined our art blog you will learn that I have been commissioned to create a painting of a Macedonian Shepherd and I'm taking you along on this journey - warts and all!

John, the Macedonian Shepherd wants a painting to leave to his grandchildren and I hope I can meet the high standards for this wonderful desire. The painting is to tell the future generations a little about their heritage back in Macedonia. As the painting is to tell the children about their grandfather I began to try out roughly sketching John (in chalk) into his landscape. Standing? Sitting? Which way should he be looking? What should he be wearing? All questions that required answers. 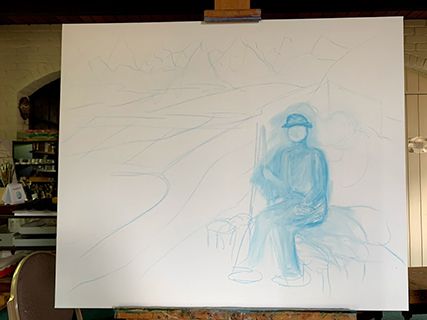 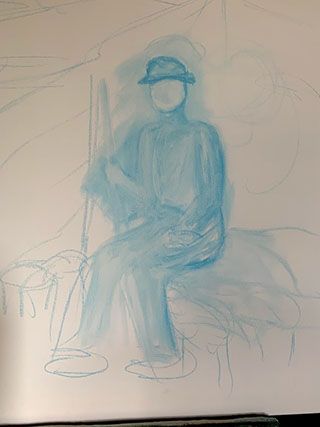 In our conversations John had begun to request certain "features" that needed to be in his painting - signposts to the past: his family home, the corner village store, his dog. Sheep! I returned to my digital sketchbook and roughly drew in all of these features - like characters in a play.

As John's ancestral home had to be on the right hand side to show off the stone wall and gateway, I moved John to the left and down the mountain a little - closer to his village. 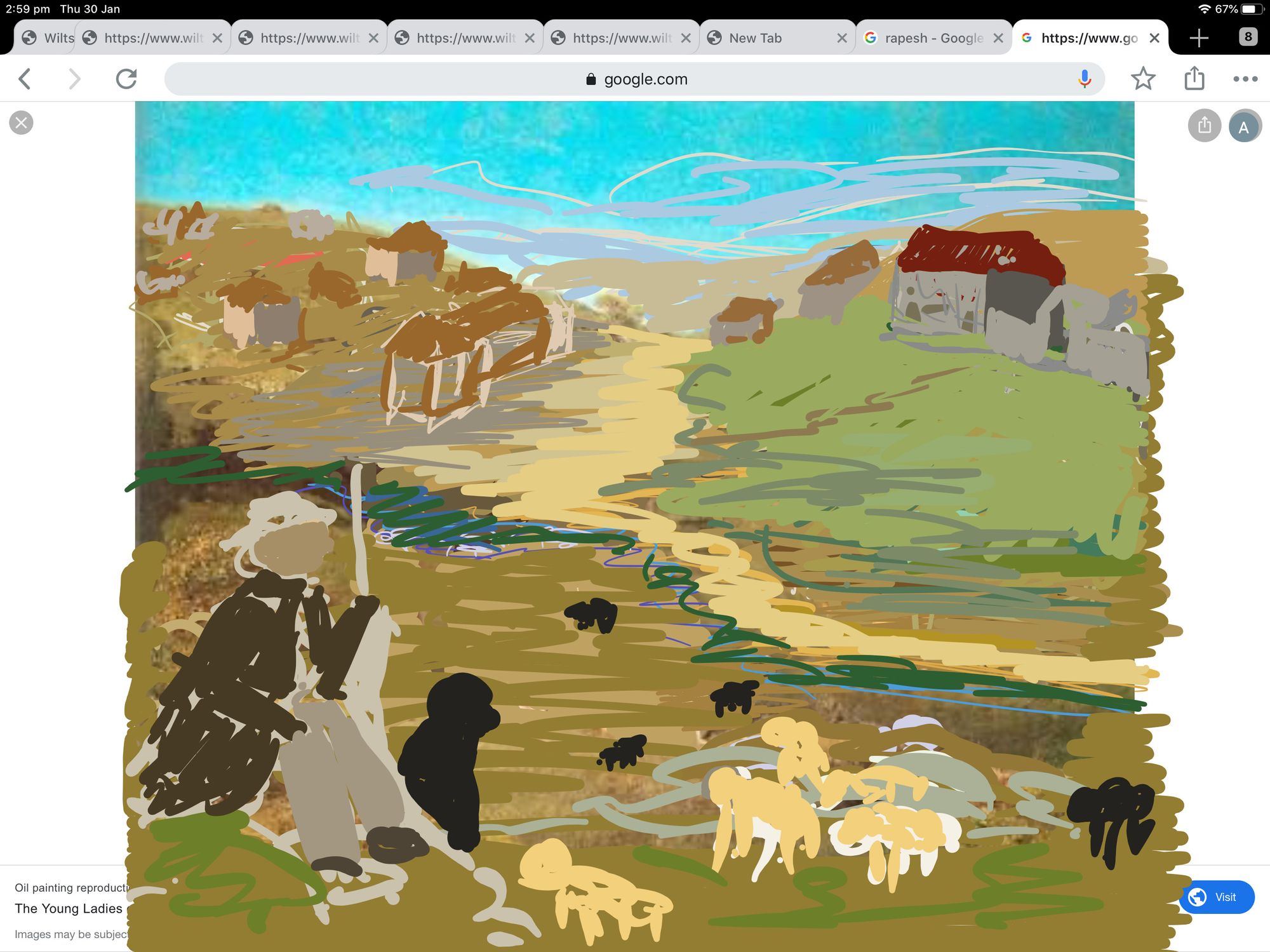 As a genre artist I need to tell a story and the chapters were beginning to form. John, on a hill overlooking his village, separated by a stream denoting his journey as a child with his family to make their life in a new country. But I will include stepping stones across the stream so that he can return to his origins. John's family once grew grain to take to the mill down the stream so I placed the stream centre to stress its importance - you can't have a village without water.

The road leading through the village helps emphasize that this painting is about a journey - back and forth through the village. John's family home with the red colourbond roof might be un occupied but is magnificent in its symbolism of family life, and the corner store is placed central to the village. The composition had begun to form. 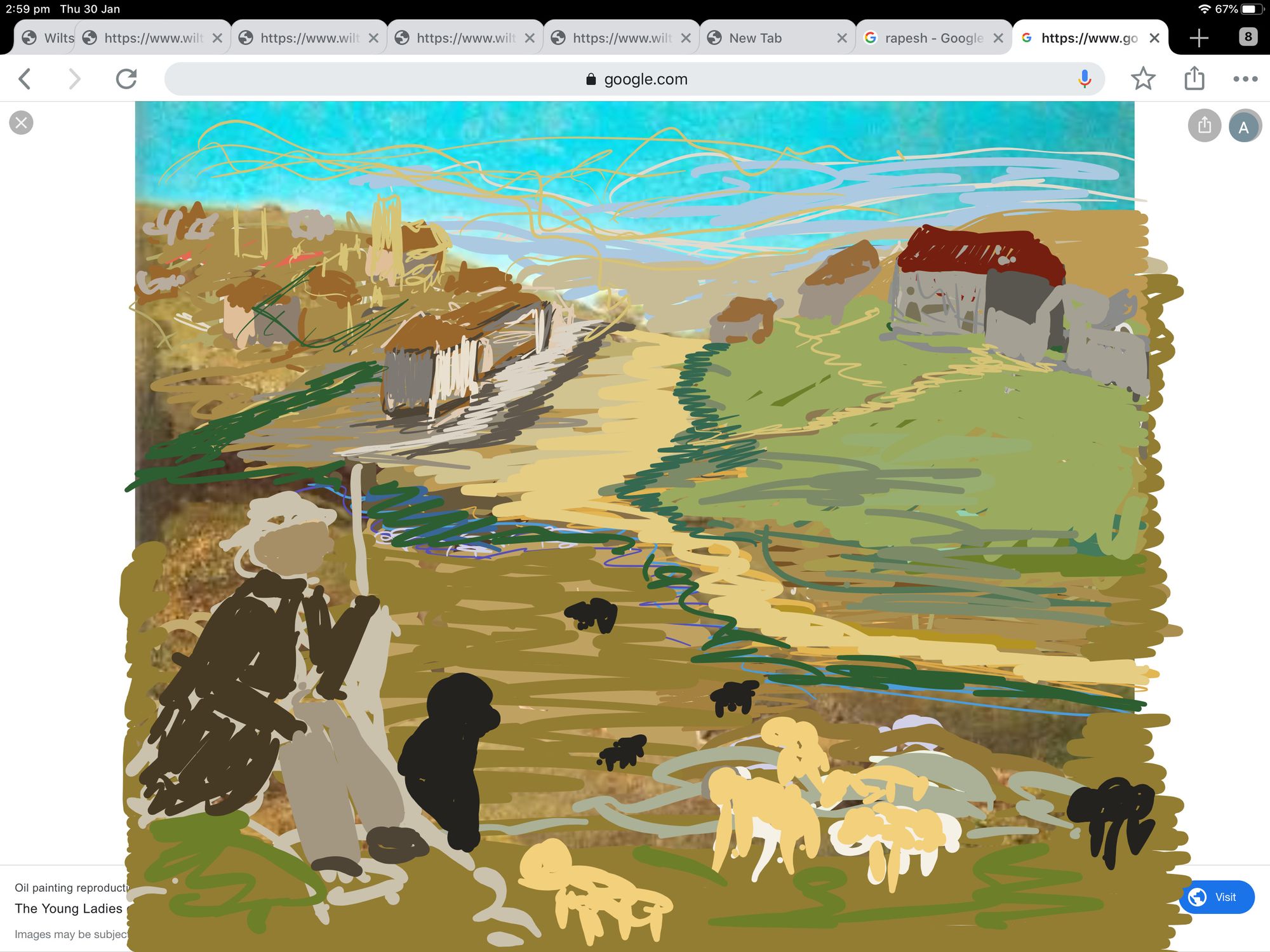 The corner store is down the hill and sits opposite his home - perfect. An artist doesn't mind moving features around a little but in this case everything is in its original place. Even the stream does run along the road and through the village disappearing behind the corner store on the left.

But along with water, all villages have a religious meeting house and John has requested his painting include the church and the grave stones overlooking the village and representing as another chapter in his history.

Along the way I asked John what kind of clothes he wanted to be wearing in his painting. After all, shepherds wear all kinds of garb. He kept answering by saying like shepherds used to wear. He is very lucky that I didn't prepare to paint him wearing a smock!! I had begun to form in my mind a romanticised scene something like that painted sometime between 1870 and 1889 by English artist Alfred Downing Fripp (1822- 1895). 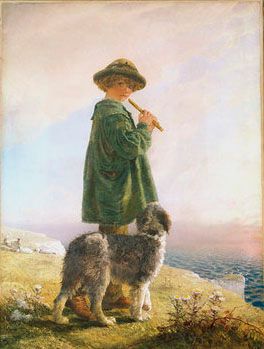 But John wants to look like his father and grandfather would have looked when he was young. He wanted to be dressed in a black woollen coat and trousers as grown and woven in the village.

Time to start getting something definite onto the canvas.

Marie Bracquemond was a member of the French Impressionist Movement . Her talent was obvious from childhood and by 16 was being exhibited as The Salon. Sadly her husband's jealousy of her talent saw Marie stop painting.