We have struck gold again this morning - to new subscribers to welcome in ADY in New York and S in Arizona - and just as we are about to hit the road to the California Gold Rush. And Good Morning to one of our favourite subscribers Chris O'Brien in New York who frequently shares his amazing photographs of New York with us.

And now we must join the thousands who sought their fortune in California in the mid 1800s.

One of the most significant historic events that bound the world together was the discovery of gold. In Australia where I live and where my ancestors sought their fortune, gold was discovered as early as 1823 but the rushes didn't start until the early 1850s.

Major gold rushes in the 19th century also took place in New Zealand, Brazil, Canada, South Africa, and the United States. Today we will look a little at the art that recorded the California Gold Rush of 1848-55 because it was this gold rush that stimulated worldwide interest in prospecting for gold, and led to new rushes particularly in Australia, New Zealand and South Africa.1

People flocked to join the gold rush from all corners of the world. Two of these men were German born Carl Christian Heinrich (Charles) Nahl (1818-1878) and Frederick August Wenderoth (1833-1884). The friends (show studied art together in Germany) had gone to Paris in 1846 following political unease in Germany and then, when the French Revolution of 1848 started, they migrated to America with Nahl's mother and siblings including his half-brother Hugo Wilhelm Arthur Nahl (1820-1889).1

Once in America and hearing of the gold strike in California in 1848-49, Nahl, along with his half-brother Hugo Arthur Nahl and August Wenderoth moved to Rough and Ready, California.

After having no luck with a "salted" mine 4 (on the Yuba River) Charles had purchased the three men opened a studio in Sacramento, moving to San Francisco after the 1852 Sacramento fire. 1

A significant painting was created by Hugo Arthur Nahl in 1851 of Sutter's Mill. 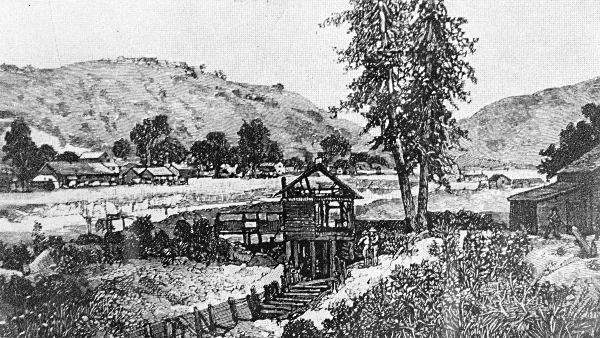 The note that accompanies the black and white photograph of the painting states:

Sutter’s Mill, 1851. First Discovery of Gold in California, January 19th, 1848.
James Marshall's discovery of gold in the South Fork of the American River at Sutter's mill on January 24, 1848, started the great rush of Argonauts^ to California. Marshall and Captain John Sutter tried their best to keep the discovery of gold quiet until the construction of Sutter's mill was completed, well knowing that the workmen would desert their jobs and turn to digging gold. The news leaked out, and the stampede began.5

^Those who came to seek their fortunes during the famous gold rush, the miners who made the tough and arduous journey west to California by land and sea, were nicknamed "Argonauts" [from the Greek story "Jason and the Argonauts"] because they too were adventurers on a quest for gold.6

Such an Argonaut is represented below in Miner Prospecting - collaboratively drawn by Charles Nahl and August Wenderoth. 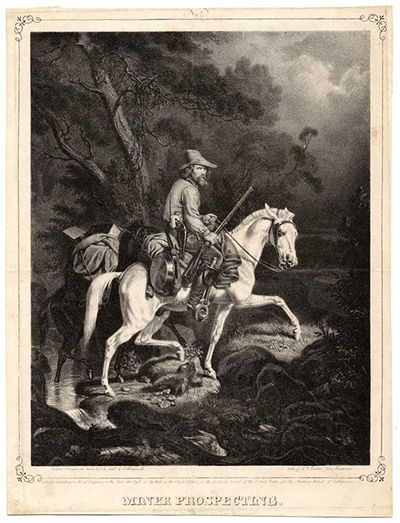 The roads to the California Gold Rush were crowded with Native Americans, Chinese immigrants, settlers and gold prospectors. A print depicting the scene was created by Charles Nahl in 1856. 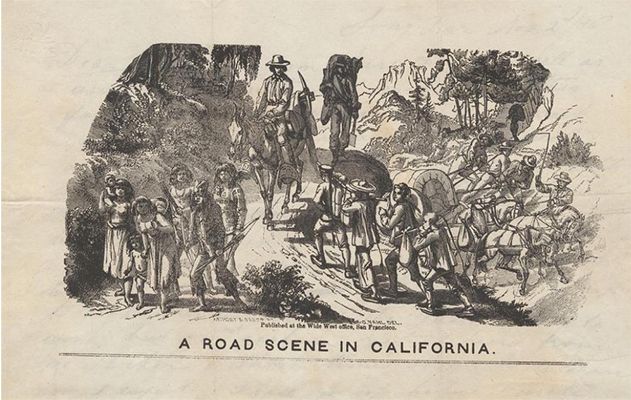 Even though life must have been unbearable harsh, the scenery would have been remarkable which is demonstrated in this oil painting done by Charles Nahl and August Wenderoth - another collaborative effort. 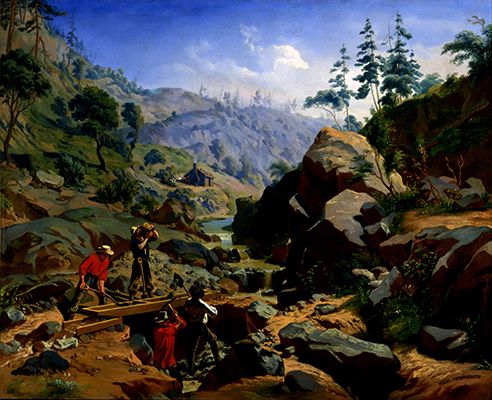 The painting above depicts life in a miner’s camp along the foothills of the Sierra Nevada mountains, California.These miners wear red, white, and blue shirts, signaling California’s importance to the nation’s future. California became a state in 1850 and was already an economic powerhouse by the time the artists collaborated on this painting. It is located in the Smithsonian American Art Museum, Gift of the Fred Heilbron Collection.3

The growing prosperity for some miners and hope for tomorrow is seen in this rather comfortable interior of a miner's cabin where the result of the day is being enjoyed. The picture is a handpainted lithograph, again done by both Charles Nahl and August Wenderoth, in 1852. 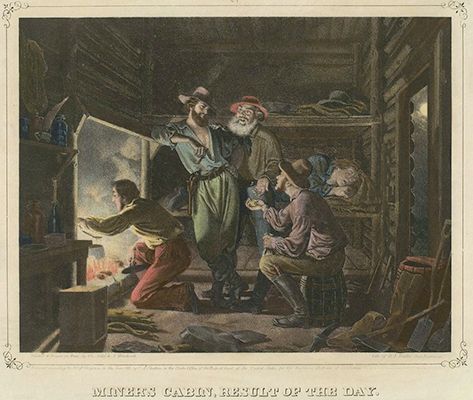 Miners Cabin, Result of the Day by C.C.Nahl and F.A.Wenderoth1

Charles Nahl came from a long line of artists - his great-grandfather was Johann August Nahl, the German sculptor and stuccist.

During the 1870’s Nahl’s genre paintings of the bawdy lives of the early miners were popular and on his death in 1878 of typhoid fever in San Francisco he was considered one of the leading artists depicting pioneer life in California. He also painted watercolors and sketches of animals with anatomical precision and classical paintings with allegorical themes...

While his brother Hugo married and had children who became accomplished artists, Charles never married and lived with his mother and a sister in a modest home on Bush Street. Charles was a member of the Pioneer Society, the Vigilance Committee of 1856, and the Volunteer Fire Department.

Frederick August Wenderoth, after collaborating with Charles Nahl as painters, engravers and photographers, took a trip to the South Seas and Australia and then married and moved to Philadelphia, where he established a photography studio. In the late 1850s he worked for a period in South Carolina, going into partnership with Jesse Bolles. There, and later when he returned to Philadelphia, he innovated a number of photographic techniques, such as the ivory-type and photozincography. Wenderoth died in 1884 of tuberculosis.1

Tomorrow we return to complete our look at the Australian miner turned artist - Hugh Schulz.

Credits
1. en.wikipedia.org
2. findagrave
3. si.edu
4. A favorite method used in unloading a useless claim or mine was called, “salting.” Mark Twain said: “A mine is a hole in the ground, owned by a liar.” truewestmagazine.com
5. wikimedia.org
6. dp.la/primary-source-sets/california-gold-rush
7. californiapioneers.org Today we meet a botanical artist who started making flowers when she was studying embroidery and design at TAFE and now concentrates on making beautiful Australian flowers using digital sewing machines she has programmed herself. Image: bloomingthreads.info