We can't look at paintings of food and people enjoying eating without taking time to acknowledge the importance of The Picnic.

Picnics can be as unbridled as a barbecue and have the ambience of a boisterous barbecue or can be an idyllic scene of refinement and a gracious style of eating. And therein lies a tale to be told which takes us from France to New Zealand with a short stop over in Spain.

In 1863 French modernist painter Édouard Manet created a somewhat amazing yet unbridled work of art which he titled Luncheon on the Grass (Dejeuner sur l'Herbe). 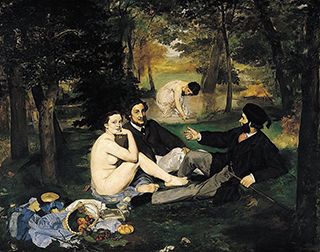 The painting was a monumental impressionist work that broke away from the classical view that art should obey established conventions and seek to achieve timelessness. Manet's work was rejected by the Paris Salon so he exhibited instead at the Salon des Refuses in 1863 causing an outrage with its scandalous subject of a naked woman lunching with two clothed men.(manet.org)

While female nudes are prevalent throughout the history of art, they had, up until The Luncheon on the Grass, always represented figures from mythology or allegory. By placing an anonymous unclothed woman in an everyday setting, Manet re-contextualized the age-old subject and redefined what constitutes as fine art—all with a hint of irony. “So, they’d prefer me to do a nude, would they?” he remarked in a letter to French journalist Antonin Proust in 1862. “Fine I’ll do them a nude . . . Then I suppose they’ll really tear me to pieces. They’ll tell me I’m just copying the Italians now, rather than the Spanish. Ah, well, they can say what they like.” (mymodernmet.com)

While Manet did not embrace the classical subjects popular with his peers and precursors, he did take inspiration from them. The composition of The Luncheon on the Grass is directly inspired by two 16th-century Italian works of art: The Pastoral Concert (attributed to either of the Italian Renaissance masters, Titian or Giorgione in about 1509)... 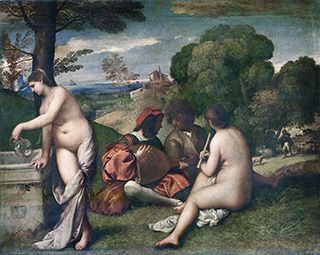 And The Judgment of Paris. 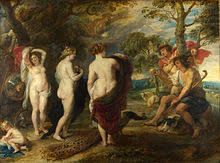 Manet's painting really has three styles in one: portraiture, landscape and still life. Looking closer it really is a delightful painting. 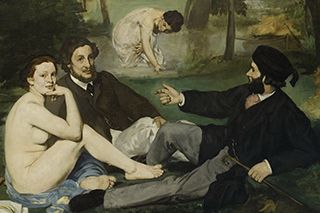 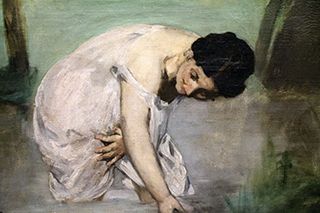 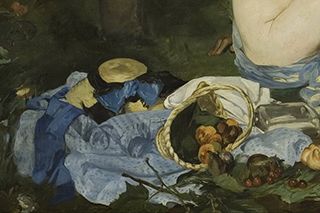 Two years later in 1865 Claude Monet decided to paint his own version of Luncheon on the Grass, a section of which is shown below. 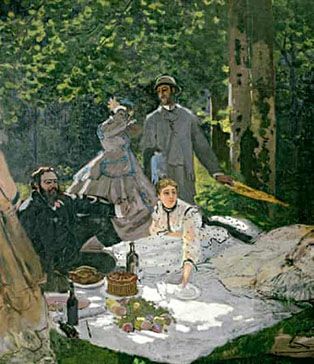 The idea for this famous work was conceived during one of the artist's painting trips to Fontainebleau Forest. Monet planned to paint a large canvas more than six metres wide for display at the 1866 Salon. Dissatisfied with the almost completed work, however, the artist refused to show it to the public and subsequently cut the canvas into three parts (the two surviving fragments are now in the Musee d'Orsay, Paris). At the same time as the large canvas Monet painted a smaller version, which is now in the Pushkin Museum. It is this version that now makes it possible to reconstruct the original plan for the work with the utmost accuracy. Following Edouard Manet, who had painted a picture with the same name (1863, Musee d'Orsay, Paris), the artist modelled the figures having a picnic on his friends. He was interested not so much in portraying everyday details, as conveying the play of sunlight on the ladies' dresses and the tablecloth spread on the grass. (pushkinmuseum.art)

No one seems to be quite sure why Monet titled his picnic painting the same as that of Manet's painting. It might have been as a homage to Manet or possible to distinguish his name from Manet's as apparently there was some confusion between Monet and Manet at the Salon exhibition in 1865.

Monet also painted The Picnic around the same time - in the mid 1860s. 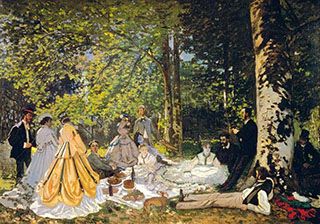 I'm beginning to think that to be noticed as an artist of any value, one had to paint your version of Luncheon on the Grass because I have just discovered that Paul Cezanne joined in and also had a go in 1876-77! 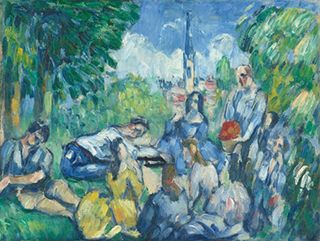 This small, dense composition depicts a luncheon scene between young people in nature. The scene takes place in a village whose bell tower can be seen in the painting. The people are spread out on either side on a vertical axis delineated here by the female figure located in the centre, whose silhouette is elongated by the church spire. The simplification of forms and the directional brushwork partially interfere with our understanding of this scene. Though we can see a recollection of Cézanne's admiration for Poussin's (1594-1665) Bacchanalias that he copied at the Louvre, we can just as easily see one of the painter's happy childhood memories in the countryside of Aix, faithful to the stories told about it by writer Emile Zola (1840-1902) who had the chance to spend time with him. Cézanne cannot be credited with the title with certitude, and it could have been given at a later date. Nonetheless, if the painter is shown to have provided it, we could take it to be a humorous citation of Manet's (1832-1883) famous painting conserved at the Musée d'Orsay. Both men did indeed show their works at the Salon des Refusés in 1863 when Manet's Le Déjeuner sur l’herbe [The Luncheon on the Grass] created a scandal. In that case, the painting would create a playful precedent from Cézanne to Manet, who had painted une moderne Olympia [A Modern Olympia] as an echo to Manet's famous Olympia (Credit: Musée d’Orsay), one version in 1870 then in a version dating to between 1873-1874 conserved at the Musée d'Orsay.(Credit: Musée de l'Orangerie)

But the story doesn't end here. Other artists have joined in and had a picnic with the images and stories that evolved from Manet's creative thought. Tomorrow you will learn about a Spanish and a New Zealand view of Luncheon on the Grass.