I am sure the rest of the world believes that Australians eat all their meals from a barbecue. That's not strickly true but I must admit we eat a great many times at a barbecue over the year. In the Court where I live barbecues happen regularly to celebrate all manner of festivities and sometimes for no reason at all except to get together with our neighbours for a chat and a laugh. But lets have a look at some paintings of people enjoying a barbecue.

I will introduce Barbecue Eating Scenes with a Beachside Barbecue painting by the famous Australian artist and musician Reg Mombassa (1951-) who implies that even the animals partake of BBQs! 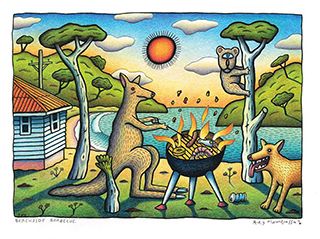 Like many Australians Reg Mombassa was born in New Zealand! Mombassa (birth name Chris O'Doherty) migrated to Australia with his family in 1969, attended the National Art School, Sydney 1969-70 and returned to art school in 1975 and obtained his diploma of painting in 1977.

Mombassa formed the rock band Mental as Anything in 1976 with four other art students. The band has held three group art exhibitions (throughout Australia) in 1982, 1990 and 1998. In 1987 the band painted a tram for the Victorian Ministries of Art and Transport, featuring a design by Reg and his brother Peter. Reg left the Mental’s in April 2000 after 25 years, so that he could concentrate on his art.(regmombassa.com/)

If you would like to learn more about Reg Mombassa and see some more of his paintings Click Here.

However it is the two Barbecue paintings by American artist Archibald Motley which capture perfectly the lively and playful atmosphere that must be present for a barbecue to be successful.

Motley's two paintings titled Barbecue—one from 1934 (above), and one from 1960—not only show his progression as an artist, but they’re also fascinating companion pieces historically, juxtaposing the black elite of 1930s Chicago with a more integrated, but decidedly bawdier, crowd a few decades later. Motley developed a knack for depicting (and, at times, exaggerating) a wide spectrum of skin tones, and that technique gives the latter scene an extra boost of vibrancy: Your eye is drawn to each group, and you’re left to wonder what brought them to the barbecue. There’s the conspiratorial threesome in the right corner, leaning in to whisper over the cigarettes; the confident, spiky-haired little girl grasping her ice-cream cone in the foreground; and the larger-than-life cook at the center, who almost looks like he’s orchestrating the whole scene with his long knife and pot fork. Everyone’s immersed in some type of conversation or activity, but the placement of the barbecue makes it clear that the grub is the reason they’re there. (firstwefeast.com) 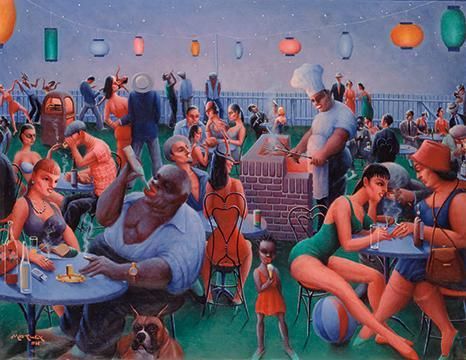 Archibald John Motley, Jr. (1891-1981) was an American visual artist. He studied painting at the School of the Art Institute of Chicago during the 1910s, graduating in 1918. He is most famous for his colorful chronicling of the African-American experience during the 1920s and 1930s, and is considered one of the major contributors to the Harlem Renaissance, or the New Negro Movement, a time in which African-American art reached new heights not just in New York but across America—its local expression is referred to as the Chicago Black Renaissance. (en.wikipedia.org)

If you would like to learn more about Archibald Motley and see some more of his paintings Click Here.

Of course The Barbecue as a style of eating has been around for a very long time- since humans first discovered fire! I found this wonderful wood carving of A Southern Barbecue created from a sketch by Horace Bradley and published in Harper’s Weekly, July 1887. 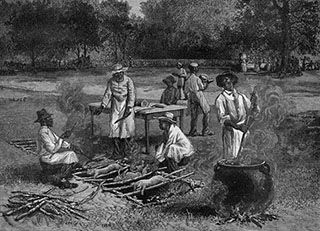 If any gastronomical treat could give the proverbially American apple pie a run for its money, it might just be barbecue. The culinary tradition of cooking meat low and slow over indirect flame (the true definition of barbecue – imposters who grill, take note) has become so prevalent over the years that BBQ itself represents a sort of pop culture, spawning TV shows, historically-focused road trips, and even fusion dishes like BBQ tacos. Barbecue’s ability to reflect whatever might be hot at the time (from reality TV to the taco craze) isn’t new; in fact, barbecue has a long history of permeation, perhaps best experienced by the ongoing barbecue feud that plagues the South. From the Atlantic to the Gulf, bordered by the western outposts of Texas and Kansas City, the area of the United States known as the “barbecue belt” houses four distinct barbecue traditions – Carolina, Texas, Memphis and Kansas City. From where did these traditions come, and how, in a relatively small region of the country, have they evolved along such different paths? The history of American barbecue is as diverse as the variations themselves, charting the path of a Caribbean cooking style brought north by Spanish conquistadors, moved westward by settlers, and seasoned with the flavors of European cultures.(smithsonianmag.com)

And we will conclude our look at Barbecue Eating Scenes with Uncle Martin and a Very English Barbecue, a watercolour painting by Plum Ovelgonne, a British iPad artist living in Singapore. 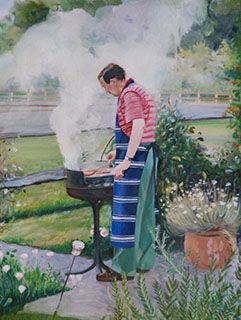 PLum Ovelgonne commented on her painting by saying: When I lived with my Uncle and Aunt as a child. I loved the way he always wears an apron whilst cooking sausages!

I have also painted a barbecue gathering but I think I have shown it recently so won't be so bold as to include it with the experts. If you would like to relook at my perception of barbecue functions please click on Brunswick Barbecue for a bit of a laugh.