Just an easy day today with a few Manet paintings to help you relax. Please take time to read the excellent description of The Railway even though it is a little long.It is a wonderful explanation of a skillfully constructed painting. 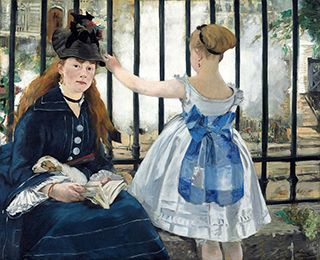 A train passes, leaving a cloud of steam in the air. A little girl, her back turned, stands staring at it. A young woman, sitting beside her, looks up from her book to peer out. It's a glimpse, caught one clear morning in Paris, by the railtracks outside the Gare Saint-Lazare.

Edouard Manet's The Railway acts casually. It offers no story, no clear relationship between its figures, no centre of interest. It's like a slice of uninterpreted actuality, a sight a passer-by might notice, and then forget. But not quite. This street scene is composed, and into the sort of real life incident that - mixing accident with order - sticks in the memory.

Its boldest, bluntest stroke of order is the flat-on screen of railings that runs across, going off-picture left and right and top. It divides foreground from background, forcing the figures up to the front. It lays down a repeating pattern of black stripes. Like the railway itself, it's an intrusive fact. There's no train in view, but these iron railings cut through the scene like the railway line slices through the modern city.

The whole scene is articulated on this iron grille. It stresses the figures' opposing directions: the woman backed against it, facing keenly front; the girl turned away, faceless, looking through it into the picture's depths. Its vertical shafts cut against the curves of the girl's raised arm, and her belling skirt, and the elegant tricorn gap that forms between the figures.

The blankly simple design isolates the compact visual complexity of the young woman. She's a mass of accessories: her lap filled with cuffs, book, dog, fan, her big round buttons, her carefully spread hair, her bonnet with its floral crest. But these dense social signs are just facts, not clues. And the railings' hard, dark, grid, set against the bright dispersing steam, makes a point of maximum contrast - a keynote for a picture that is full of sharp edges and soft dissolves, of silhouettes and blurs.

The back of the girl's head and neck stands out against the billowing steam. Her elbow merges into it. One side of the woman's chin is boldly defined. The other sinks untraceably into the face. The picture has a cut-out, cartoon clarity that keeps slipping into uncertainty.

It's a scene that doesn't fix. It's a bit like a frieze. There's a hint of classical statuary in the girl's raised arm and, in the line of railings, there's a hint of a classical colonnade. But they're only hints. Manet's magic is not to insist on finding the eternal in the contemporary. It's just a subliminal resonance - now you see it, now you don't - as your eye, reading signs, making patterns, seeking meanings, plays across the indifferent row of bars.(manet.org) 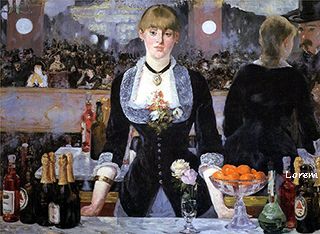 A Bar at the Folies-Bergère was presented by Manet at the 1882 Paris Salon exhibition, just one year before his death. The painting is the culmination of his interest in scenes of urban leisure and spectacle, a subject that he had developed in dialogue with Impressionism over the previous decade. manet.org) 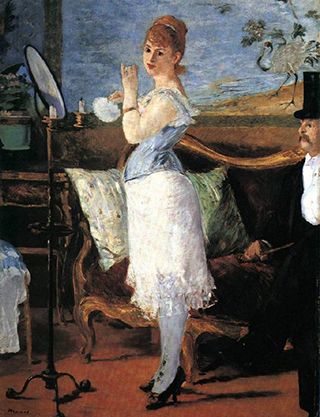 Nana was painted in 1877 and it is suggested that the inspiration for the painting came from the French novelist Emile Zola's book L'Assommoir. Zola's novels explored poverty and alcoholism in the working-class of Paris, during the C19th. The model for the precociously immoral Nana, was a Parisian mistress named Henriette Hauser. Nana was a common term used in the C19th for a lady of the evening.(manet.org) 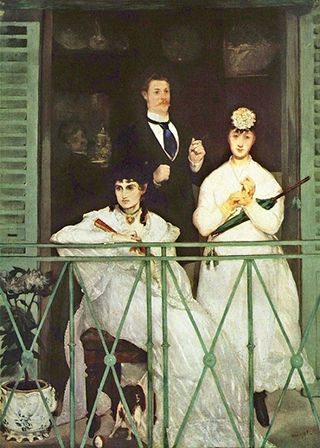 When Manet painted this piece, scenes of bourgeois life were in vogue. yet The Balcony went against the conventions of the day. All the subjects were close acquaintances of the artist, especially Berthe Morisot who here, pictured sitting in the foegroud, makes her first appearance in Manet's work, and who went on to become one of his favourite models. (manet.org) 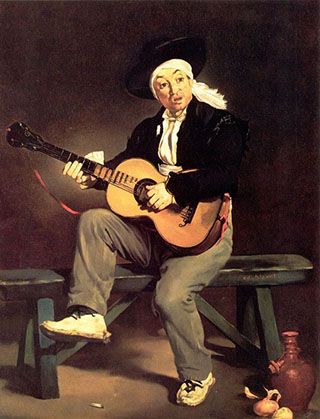 The Spanish Singer painted in 1860 by the then little-known Manet caused such a stir among younger artists that they paid a group visit to his studio. Although those artists may have been excited about Manet's novel technique, what concerns us is his meaning...Although the figure of the singing guitarist seems Spanish even contemporaries noted that the costume was inauthentic and that he seemed posed in a studio. One criticised "the Marseilles-type jacket and the pants of this guitarrero from Montmartre." Art critic Emile Zola remarked that while Manet's public might suppose that his models were Spanish, they ought to know that Manet kept "Spanish costumes in his studio and liked their colors." (manet.org)

Showcasing ""Music in the Tuileries" and "The Luncheon on the Grass" by Edouard Manet- paintings that mark the start of modern art.