As we are coming to the end of Hanukkah it is a perfect time to showcase the American Windows created by Marc Chagall (1887-1985) arguably the most famous Jewish artist of all time.

Though Chagall was well known for his surrealist, dream-like paintings, it was his stained glass windows later in life that would serve as part of his legacy. Chagall carried through his mastery of color to his stained glass pieces, creating awe-inspiring, large-scale pieces. (blog.singulart.com)

Below is his American Windows which can be seen in the Art Institute of Chicago and were created to commemorate America’s Bicentennial and were unveiled in 1977.

Chagall has said: To me, stained glass is the transparent wall between my heart and the world’s. Stained glass is uplifting, it requires gravity and passion. It must come alive through the light it receives.
(blog.singulart.com)

We can learn a little more about the "Windows" from the Art Institue of Chicago.

At eight feet high and thirty feet across, these stained glass windows are a vast arrangement of colors of the highest intensity—bright reds, oranges, yellows, and greens—placed against brilliant shades of blue.

Representations of people, animals, and items such as writing implements, musical instruments, and artists’ tools float above a skyline of buildings and trees. Artist Marc Chagall began working on his design for the windows in 1976, America’s bicentennial year, and constructed the windows as a tribute to the freedom of artistic expression enjoyed by the people of the United States. When designing the windows, he stated, “When one works, one must have a vision.” For Chagall, that vision was a vibrant celebration of humankind’s creative energy.

The America Windows consist of three main sections, each divided into two panels; together, the six panels feature imagery that honors the arts and America’s independent spirit. While there are many details throughout the windows, particular items in each panel reveal distinct themes. 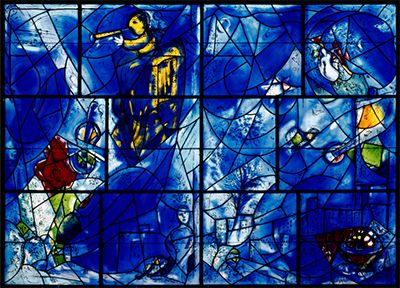 Reading from left to right, the first panel (above) represents music, including images of musicians with violins and horns. A faint detail in the upper left corner suggests part of a musical score with staff and notes. The second panel alludes to painting with depictions of paintbrushes, a canvas, an artist’s palette, and, in the lower right corner, bottles and a bowl of food, items that could be part of a still life. 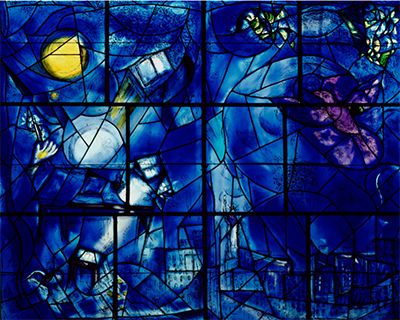 In the third panel (above), books, a desk, an inkwell, and an extended hand holding a pen evoke the world of literature and expression through the written word.The fourth panel shows a bird flying over a skyline containing the Statue of Liberty, reminding viewers of America’s founding principles of freedom and democracy. (The Statue of Liberty, a gift from the French, celebrated America’s centennial in 1876; the America Windows were Chagall’s gift for the bicentennial.) 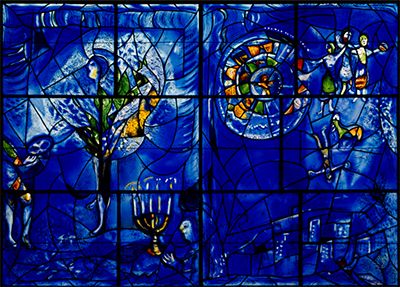 The final two panels bring the viewer back to the arts. In the fifth panel, depicting the theater, a curtain surrounds the top of a stage set, framing performers, one of whom is holding a mask, and a candelabrum. The sixth, and last panel represents dance, with a group of performers, some holding tambourines, hovering near a dynamic swirling form of colors and shapes that surround a solitary figure.

All six panels of the America Windows, connected by a shared skyline, create a singular scene of creative and personal freedom.
(https://www.artic.edu/)

Remembering the people from the Emergency Services who work to keep us safe. Shown are an early painting of a bsufhre by von Guerard, the Three Sisiters Blue Mountains by John Wilson, a firefighter by Ben Hoole,