A couple of weeks ago I introduced you to John Pickup, the last surviving member of the famous Broken Hill painters known as the Brushmen of the Bush. To lead us out of Easter and into colour I have chosen some of John's works that contain elements of religion and spirituality.

The first painting is a bird's eye view of the Jubilee Service at St Paul's Cathedral, London (1977) to celebrate 25 years on the throne by Queen Elizabeth 11. 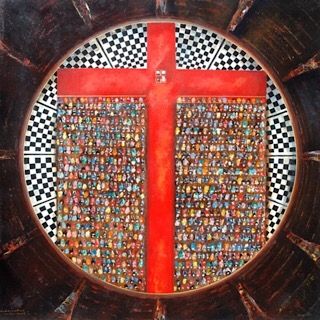 Seen from above through the dome, John has highlighted the dominance of the red cross thus emphasising the Queen's role as Defender of the Faith and Supreme Governor of the Church of England. The stimulus for the painting came after John saw the television coverage of the service and was impressed by the geometric pattern of the floor, the aisle and the audience - with the two figures of the Queen and Prince Phillip being central to the composition.

The painting is quite large (48 x 48 inches) and it was included in the 1977 Brushmen of the Bush Exhibition in Canberra. When the ABC News carried the story that Prince Charles was coming to Australia for the Queen's Jubilee, through the efforts of John Pickup, it was arranged for the Prince to open the Brushmen exhibition. Below is a photo of John Pickup with Prince Charles demonstrating his genuine interest in John's painting (of Don Quixote in this case). From all accounts Prince Charles it a very good water colourist himself. 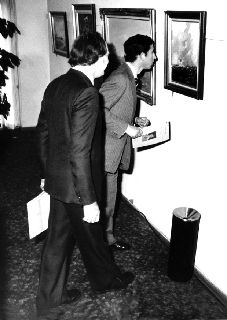 As John was the Brushman organising this particular exhibition in Canberra, the group elected him to be the one to escort Prince Charles around the paintings. John Pickup recounts: When he (Prince Charles) came to the painting of the Queens Jubilee Celebration he looked closely at it and said "I'm not in it – I should be on the end next to my sister”! As faint as the figures were Charles had discerned that it was a woman at the end of the seating on the left. At the end of the day John painted Charles into the painting and to show his appreciation the Prince purchased Outback Polo Match (by John Pickup) also on exhibit. Sadly we don't have an image of the painting but here is the news report of the purchase. All the money from the exhibition went to a charity. 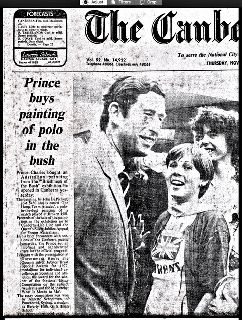 The composition of the Jubilee Painting is very clever in that John has chosen to emphasise the geometrical patterns of the main features - the patterns formed by the stark black and white floor covering and multicoloured congregation against the red cross give the image an iconic definition.

The next painting of John's we will look at is titled The Approach of Mary Magdalene which offers us the chance to begin to really appreciate the way this artist uses colour. 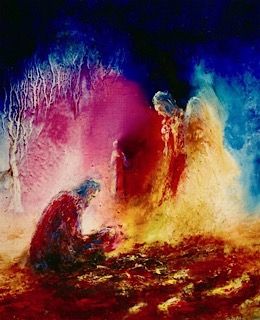 Many painters who tell a story do so with their subject matter and colour is used mainly to define setting features rather than add to the narrative. But for me, and I think John Pickup would agree, painting is a language and colour should be thought of in a similar way as a writer thinks of adjectives and adverbs and how they can embellish the plot line. In John's paintings his palette is used to add drama, emotions, intrigue and especially actions. John's choice of hue, tint, tone and shade, helps form the language of his visual narrative.

To conclude today we will look at one of John Pickup's favourite paintings from the thousands he has created and that is Bliss in the Outback. I have shown you the painting before but we have not studied it in detail. The painting is based on the robbed figure who appears in the opening sequence of the film Bliss which was based on the first novel written by Australian writer Peter Carey and published in 1981. 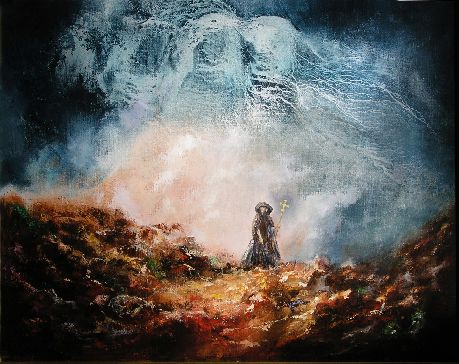 Written as a dark, comic fable, the story concerns an advertising executive, Harry Joy, who briefly 'dies' of a heart attack. On being resuscitated, he realizes that the life he has previously drifted amiably through is in fact Hell – literally so to Harry. His wife is unfaithful, while his son is selling drugs, and his daughter is a communist selling herself to buy them... Redemption comes in the form of Honey Barbara – a pantheist, healer and prostitute. In the words of the book's blurb "Honey is to Harry as Isis is to Osiris. Together they conquer Hell and retire to the forest where their children inherit the legend of paradise regained." But Harry must die for a second time to be truly saved. (Wikipeia)

Study the colours in John's painting and observe how the colours combine and compete to create movement especially in the clouds. I can see cobalt clouds, traces of white whisps generating a swirling mass of trailing tributaries, pale pink hues of hope rising above the rugged sienna ground. This is my interpretation. What is yours?

Let me, O let me bathe my soul in colours; let me swallow the sunset and drink the rainbow.