The land that Hugh Schulz so loved saw the genesis of story telling tens of thousands of years before white people arrived and Hugh has paid respect to Country and to its Indigenous Peoples in the painting The Story of the Sturt Pea. 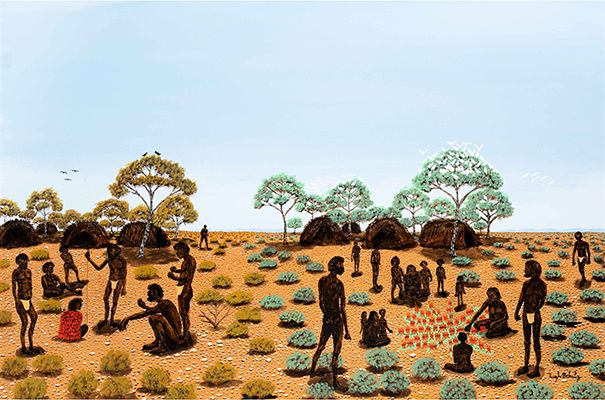 The Sturt Pea is one of our most spectacular wild flowers. It is unique to Australia and samples were first collected by William Dampier in 1699. The first specimens are today housed at Oxford University in England. The common name honours Charles Sturt, who explored central Australia in 1844.

The painting above by Hugh Schulz captures his intrepretation of one of the Aboriginal folk lore explanations for the origin of the Sturt Pea.

As I understand the story tells us that:

A young and beautiful native maiden was promised in the Dreamtime to a warrior, who made her a cloak of red parrot feathers. From a distance, she would follow her lover in the tribal wars, faithfully roaming [the desert country] to be near him.

Drought years brought famine to the tribe, and the young warrior was one who went far afield in search of food.

During his absence the maiden kept lonely vigil, refusing to leave the place of farewell after the tribe had moved on. Their last view of her was a vivid red cloak surrounding her black head as she knelt in hopeful prayer. Neither she, nor her lover, was seen again.

When the rains came and replenished the parched earth the tribe returned. Of the girl there was no sign - but a lovely red-and-black flower blossomed where she had last been seen.2

Hugh Schulz has recreated the Aboriginal story of the Sturt pea in his own unique way. In this painting he has concentrated our focus on the earth - the soaring birds are far off in the distance. If you look carefully you will notice that the painting has been constructed of two parts: two acts of the story.

Act One of the painting (on the left) sees a group of Aboriginals gathered around a woman wearing the cloak of red parrot feathers - as told in the story. In Act Two, on the right there is a patch of the brilliant red Sturt pea where the girl was sitting.

In both parts there is dialogue amongst the indigenous people - discussing that plight of the girl on the left and the arrival of the peas on the right.

Note that the colour of the bushes and leaves in the two acts are different. A colour similar to yellow ochre or sepia appears on the left perhaps signifying the past as seen in an old photograph.

On the right the bushes are painted in a bright shade of green as are the leaves of the trees: the green of new life and growth is being strongly portrayed.

Interestingly, on the left we have black birds in the tree - crows no doubt. On the right are the white cockatoos. We can only conjecture what was in Hugh Schulz's mind as he painted this scene but I am assuming he saw the crows as a symbol of death and the white cockatoo as life.

Hugh Schulz's desire to camouflage animals and objects in his paintings is present here. If you look carefully to the right of the young girl in the parrot feather clock you will see a dead bush - no doubt this is the symbol for her lost warrior and lover.

And note that to the right of the patch of peas, in Act Two, is an elderly woman explaining that the spirits of the young couple can always be found in the beautiful and brilliantly coloured wild pea plant that survives in the harsh desert.

The Aboriginals in the painting are going about their daily lives - a hunter returns, another consoles the young woman who has lost her warrior, children are nearby - listening.

Listening to the story from the past.

The Sturt Desert Pea (as it is commonly called) is the floral emblem for Broken Hill where Hugh Schulz lived for a very large part of his life and where most of his paintings are set.

The Wilyakali people traditionally occupied the lands around Broken Hill and visited the Paakantji people on the Menindee Lakes in the Darling Riverine Plains Bioregion each year. The three Major language groups for the Broken Hill Region are the Paakantji, Mayyankapa, and Nyiimpaa.3 If anyone knows the word for the Sturt Desert Pea in one of these indigenous languages please let me know.

In a couple of days we will return to look at some of the painting techniques Hugh Schulz used. If you missed the previous posts please follow the links to The Magic of Hugh Schulz: Part 1, Part 2 and Part 3; Hugh Schulz: Visual Narrator Part 1.

Thank you to Andrew from the Hunter Region for sharing his collection of Hugh Schulz paintings and for the enormous amount of work contributed to producing these posts for the AnArt4Life blog.

Thank you to John Pickup for providing the early prints of Hugh Schulz works and for his recollections of his friend and fellow Brushman of the Bush.

In this post we continue the analysis of the paintings created by Australian naive artist Hugh Schulz (1921-2005). The focus today is on the narrative nature of the paintings. Image credit: S. Lindeman