Hugh Schulz, at home in his studio, is a picture of a man with the perception and skill of a visual story teller and whose love of life, children and the Australian outback combined to drive him to create a remarkable oeuvre of paintings that has brought so much pleasure to so many people around the world.

As Hugh worked in his studio creating his beloved works he could not have possibly envisioned that 76 years later we would be looking at the paintings he produced while a young soldier serving with the Australian forces in New Guinea in 1944. 2

But that is where we are going to start today.

Hugh wasn't to become a full time professional painter for another 30 years but in these seminal works are present his characteristic desire to tell a story in line and colour, a keen observance of nature and attentiveness to detail.

The fighter plane (above left) represents the human conflict of the time and Hugh reminds us that conflict is also present in nature in the stand-off between the wild boar and crocodile (above right). But to my knowledge these are the only paintings by Hugh Schulz where such a theme is present and even then the message seems to be that the animals will find a solution.

Also present was Hugh's recognition of the patterns that form in both the natural and human made world. We see him creating motifs of palm trees, huts, grass arranged in lines and, as alluded to above, a closeness that symbolises a harmony within the environment: everything has a place in the world of Hugh Schulz.

As Hugh Schulz wasn't inclined to date his paintings we can't do a chronological review of his works nor really see a development of a style.

We do however have some images of paintings done in the 1970s and it would appear that, right from the start of his professional career as an artist, Hugh came out of the blocks knowing what he wanted to paint and how this was to be done.

So let us take time to consider some of the features that combine to produce these remarkable views of the outback world through the eyes of Hugh Schulz. 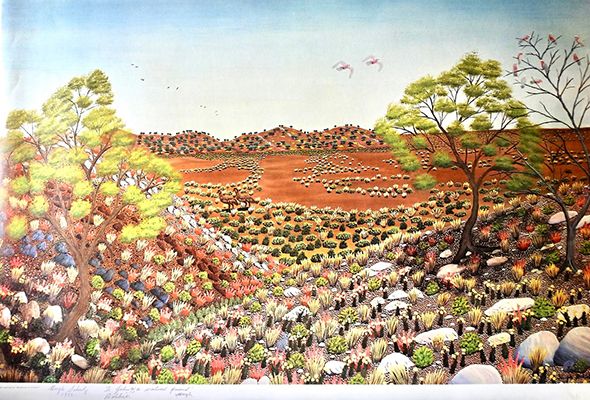 The image above is a print of a Hugh Schulz painting, created in the early 1970s when Hugh was first engaged in the exhibitions with the Brushmen of the Bush.4

Note the brightly contrasting colours highlighting the detailed vegetation, rocks and earth. As Andrew the Collector* says: many of the amazing colours in Hugh's palette are unexpected and appear where least expected but form into a tapestry of patterns which go to make up the simple yet engaging composition. Andrew goes on to point out that: One of Hugh's quirky techniques was to camouflage animals in the brush and its not just about humour - it is melding the flora and fauna in a harmonious way.

Look even more carefully into the painting above and you will find two emus blended into this magical desert world - and some birds (galahs) taking possession of the sky and tree tops.

Birds, in fact, figure greatly in the subject matter of the paintings and the pre-eminent creature for Hugh was the eagle seen soaring across its kingdom in Northern Flinders - below left.

Stop for a moment - go back and take in the kaleidoscopic tapestry of colours and the patches of patterns which either blend into the next or butt up alongside in contrast. And who owns this domain? Certainly the sky belongs to the birds.

Hugh Schulz's eagle motif is seen dominating the third half of this original painting (below), owned by Hugh Schulz's daughter Sandra Lindeman. The bottom third is dominated by terra firma, which Hugh Schulz brings to life in numerous creative and ingenious ways which we will learn more about in coming posts. 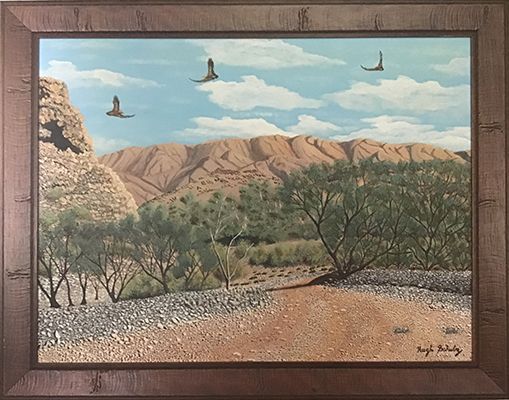 John Pickup, the last surviving member of the Brushmen of the Bush has very generously shared some memories of his friend and fellow artist.

John recalls: Hugh would go out to various outback locations and paint the basic details. He would return to his studio and then begin the meticulous work so evident. Many's the time I used to sit watching him paint and marvelling at his attention to detail: his wife Beat would often bring us a cup of tea and scones as we talked. Time was not important. 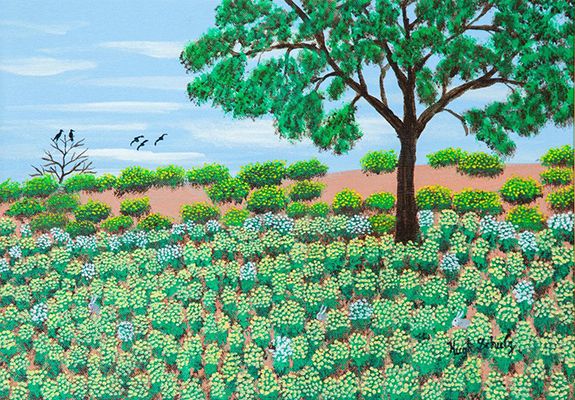 Earlier we discussed Hugh's quirky technique to camouflage animals in the patterns of vegetation. Look very carefully into Wild Daiseys's (sic) in the Sand Hills and you will find three little bunnies.

John Pickup continues: Sadly, when Hugh's eyesight began to deteriorate he had cataract operations but instead of him receiving lenses for close-up work he was given distance lenses. Often when I visited him he would be working on a painting using a very large magnifying glass in an attempt to see the detail. Eventually he had to give up painting because of the loss of his eyesight.

The painting below we believe was produced by Hugh Schulz in about 1995. The characteristic patches of patterns are present in an interesting composition that tells a story. The details on the vegetation are there but not with the same intensity. And the eagles still ride on the thermals though now share the sky with a communication structure. 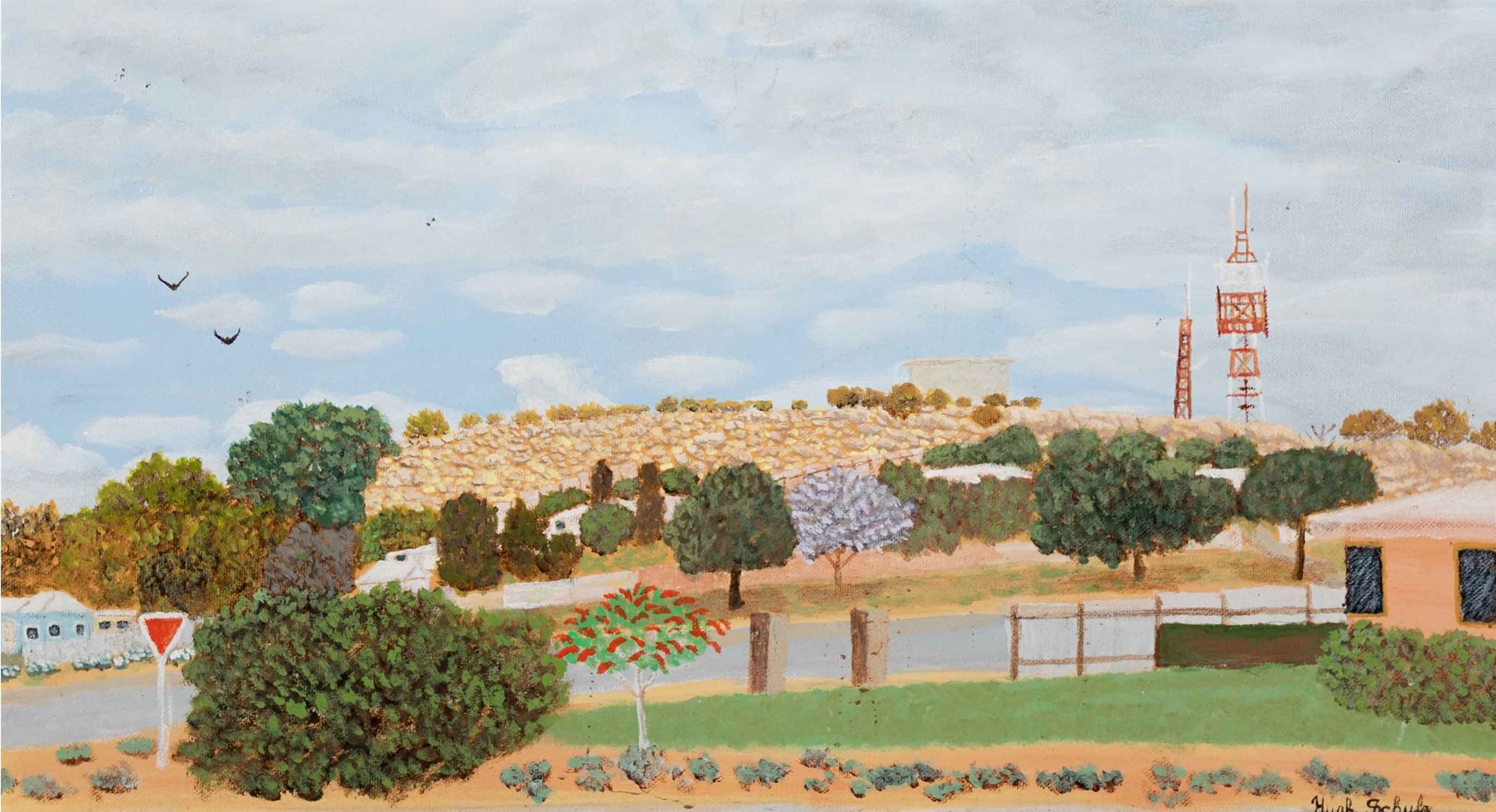 The five Brushmen of the Bush exhibited together to raise money for charities for nearly two decades. John Pickup reveals: Often at the exhibitions one artist would be "flavour of the month” selling lots of paintings. We used to worry lest Hugh did not sell as many as the others until at one particular exhibition he became "flavour of the month " selling almost all his works and we were all very happy about that.

I still believe that Hugh Schulz is one of Australia's finest naive artists. Hugh Schulz is my favourite painter in the Brushmen of the Bush group both artistically and personally. A gentle soul and hard to believe he was a commando during the war.
All the best,
John

His daughter Sandra believes the painting below was done later in Hugh's life. As it features Hugh Schulz's favourite creature - the eagle- it is the perfect image with which to conclude today's post on this great Australian naive artist.

This magnificent bird of prey was portrayed by Hugh as not only dominating the sky but also caring for and protecting its young. 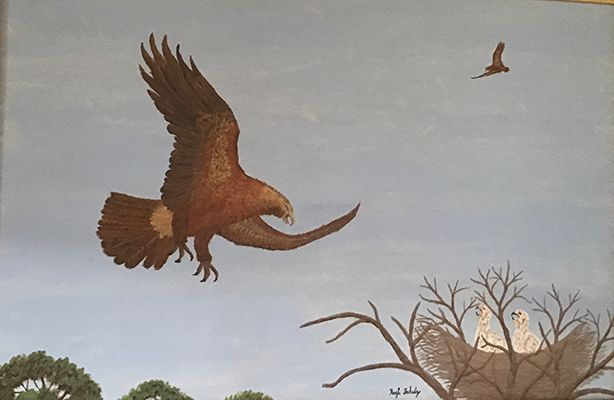 In a couple of days we will return to look at some more Hugh Schulz paintings through the elements of narrative and painting techniques. But if you missed the previous posts please follow these links to The Magic of Hugh Schulz: Part 1 and Part 2.

*Thank you to Andrew from the Hunter Region for sharing his collection of Hugh Schulz paintings and for the enormous amount of work contributed to producing these posts for the AnArt4Life blog.

Thank you to John Pickup for providing the early prints of Hugh Schulz works and for his recollections of his friend and fellow Brushman of the Bush.4

Credits
1. From the collection of Sandra Lindeman, daughter of Hugh Schulz.
2. Correspondence with Sandra Lindeman.
3. From the collection of John Pickup, one of the Brushmen of the Bush.
4. In 1972 when Broken Hill artist Eric Minchin did not have enough paintings for a second exhibition he invited fellow artists (Hugh Schulz, Jack Absalom, John Pickup and Pro Hart) to join him to exhibit in Sydney. The name Brushmen of the Bush was coined by Lorraine Hickman in The Australian Women's Weekly's article on the exhibition. The "Brushmen of the Bush" went on for many, many years to have exhibitions in Australia and Overseas to raise money for various charities.
5. From the collection of Andrew from the Hunter Region of NSW.
6. Image provided by the Broken Hill Regional Art Gallery from their collection and with the assistance of Eileen Wright, Collections Project Manager.

With Andrew, the Collector of Hugh Schulz paintings, we begin to explore the perception and narrative of the outback through the works of Australia's great naive artist. You will be delighted, enthralled and amused. Image credit: S. Lindeman