Hugh Schulz the miner loved his country so much he set out to share his love of his country with the world.

And this is Hugh Schulz - the prospector with his eagles, with a passion to paint and to tell a story. 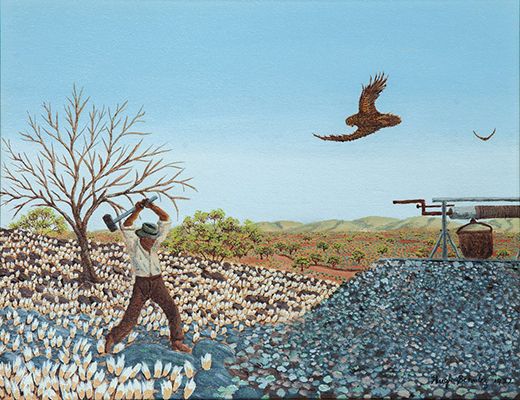 Miners and prospectors are amongst the very few humans that appear in Hugh Schulz's paintings - a testament to the signifance he placed on the role these men played in Australia's history.

But Hugh is deliberately telling us more in this visual narrative: this prospector is in harmony with the land even though he is seeking to make his fortune from it. Note that the title tells you: the prospector and his eagles! This artist had a very strong affinity with the Australia's most magnificent bird: tough, resilient like the miner.

Note also that the diggings from the miner's very small man-made mine blend into the tonal colour of the nearby ground covering. Hugh has also painted the prospector in the same colours as the ground behind him. The dead tree is interesting (there are few native deciduous trees in Australia) and I find myself wondering why Hugh painted it this way. We can only conjecture - the bare tree certainly provides the perfect structure to showcase the birds that Hugh loved. But there are no birds in this tree. Perhaps a symbol of the harsh life. In contrast, the background landscape is very green, symbolising life and growth.

And the narrative theme focusing on the miners continues below with the emotion of hope paramount.

The stories are classic - a miner toiling at his windlass and relaxing with a meal after the hard day. But in both paintings there is a tiny symbol of survival in the harsh countryside. See if you can find it.

Naive artists such as Hugh Schulz are in fact visual dramatists. They set out deliberately to entertain, to pique the interest of the viewer, to surprise. These paintings are as real as a dramatic play.

The Coming Storm Outback (below) has the obvious theme of drama: the isolated homestead against the elements with dramatic clouds building up where the visual play is largely dependent on our memory of the ferociousness of a storm. 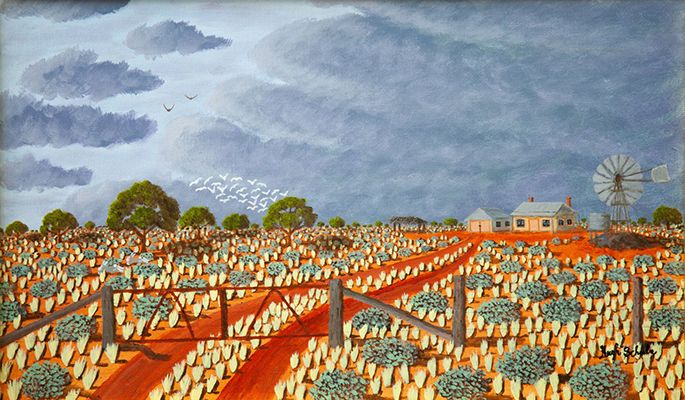 Hugh's quirky sense of humour is also present because if you look very carefully into Coming Storm Outback you will find two rabbits scampering away, perhaps to find shelter.

There is no doubt that Hugh Schulz sought to have his viewers engage with his pictorial creations - and that is the mark of a story teller.

Another feature of a painting that places it within the genre of narrative is movement. Apart from the miners toiling at their work, the movement in the Schulz's paintings comes from the birds and animals.

We have already been tempted to look for the scampering rabbits darting about in the bushes and seen the beloved eagles soaring above - the latter no doubt in Hugh's plot - the heroes of the drama that unfolds daily in the outback. But don't ignore the emus that add the touch of dancers on a stage.

And the crows take on the role of audience: watching, perhaps chatting about these strange creatures that call themselves birds but cannot fly! 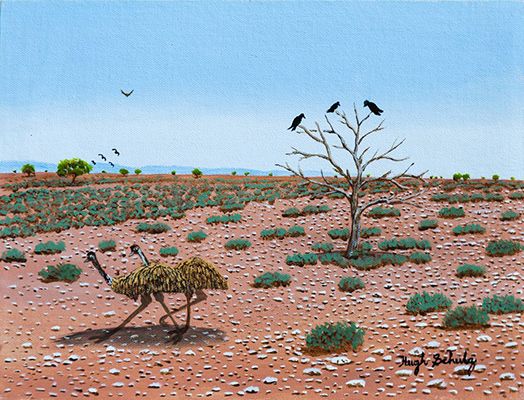 I have read a criticism that the kangaroos in some of Hugh Schulz's paintings tend to look as though they are stuck on, not blended into the scene.

But this is the ignorance of someone who doesn't know the outback and doesn't understand naive painting.

As a naive painter Hugh Schulz seeks to recreate the truth of the scene as he perceives it. This is the technique used by naive painters to marry the narrative to the image.

Kangaroos do stand out as if stuck on the scene - stark, watchful of danger and perhaps a little annoyed that humans have dared tread on their country. 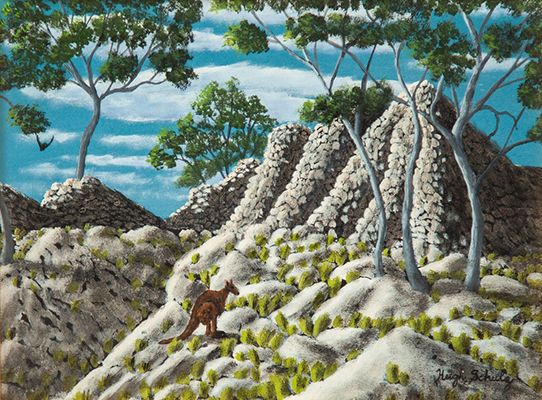 I am going to let Andrew the Collector* have the last word today when he talks about why he likes Hugh Schulz paintings:

I feel as if I could walk into his paintings.

I can smell the desert flowers and just be enveloped by the beautiful red earth and all the different blues and greens of the vegetation around me.

I think that you have to have visited the desert to fully understand these amazing and beautiful works.

Tomorrow we are going to look at a single painting by Hugh Schulz that contains all the elements of narrative.

But if you missed the previous posts please follow the links to The Magic of Hugh Schulz: Part 1, Part 2 and Part 3.

*Thank you to Andrew from the Hunter Region for sharing his collection of Hugh Schulz paintings and for the enormous amount of work contributed to producing these posts for the AnArt4Life blog.

Thank you to John Pickup for providing the early prints of Hugh Schulz works and for his recollections of his friend and fellow Brushman of the Bush.

Credits
1. From the collection of Andrew from the Hunter Region of NSW.
2. Image provided by the Broken Hill Regional Art Gallery from their collection and with the assistance of Eileen Wright, Collections Project Manager.

Yesterday we enjoyed some wonderful photos of paddle steamers on the Murray River, Victoria. Today we have an interesting article on the early artists who painted the scenes of the gold rush in Australia. Image: Gold Diggings Ararat by Edwin Stocqueler.