The tragedy that happened a few days ago above our bushfires when a water bomber crashed killing its three American crew is a tragic reminder that we all belong to an international community.

The Exchange of Firefighters between Australia and countries such as America and Canada, has been operating for years. Every summer when the fires start up and increasingly get more destructive, hundreds of firefighters arrive on our shores to stand on the front line and fight.

When deadly wildfires swept across California in 2018, New Zealand and Australia sent more than 130 firefighters to help control the blaze.

Now, for the first time since 2010, American firefighters are providing the same lifesaving assistance to Australia. (thewashingtonpost.com) 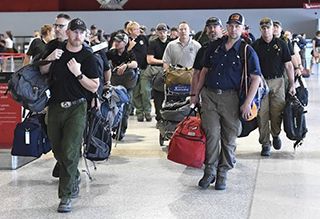 There are also hundreds of New Zealand firefighters helping in Australia this year and offers of help have come from such countries as Vanuatu, Singapore, Papua New Guinea and France. And I am sure there are many others.

Whilst Australia has its own firefighting aircraft fleet each summer we lease more from America such as the one that crashed last week. The courage of all the people who fight fires is immeasurable. And how they can fly an aircraft in such appalling conditions is beyond comprehension. Without these aircraft there would be no way to stop the fires. 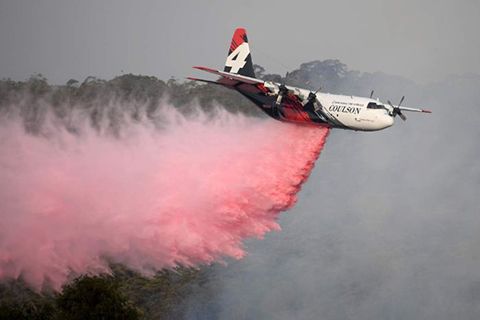 So why am I mentioning this on an Art Blog?

Art is about life.

You can't begin to understand All Things Art in a vacuum. All works of art are a reaction, a response to some kind of stimuli: an event, an experience, a thought, an emotion.

Artists of all ilks record world history and from this devastating summer of destruction and courage, of fear and comfort, of sacrifice and growth will emerge untold and incredible works of art.

Follow this link to learn from Sara Barnes from My Modern Met How 25 Artists Are Using Their Art to Express Their Sadness Over the Australian Bushfires. It's an interactive site so you can "like" a piece or leave a comment.

Of course, many of the volunteers who fight the bush fires are artists.

The artist below is an 11 year old New Zealander called Leon who reacted to the massive Pigeon Valley Blaze (near Nelson) in New Zealand back in February 2019. A poignant reminder that we are not alone in the fight of our lives. 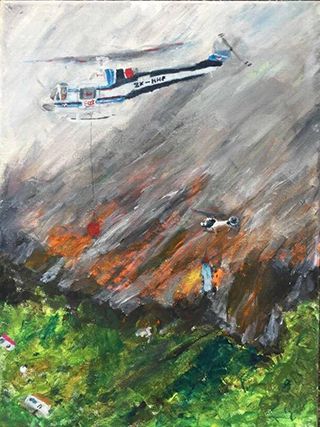 A Huge Thank You to all the International Emergency Workers who have joined us in fighting the Australian Bushfires.

On the 4th May International Firefighters Day is celebrated. Check out the Museum of Fire in Penrith, New South Wales or on Facebook: - @MuseumOfFire

In May we will return to thank all those who have been involved in fighting our bushfires this summer and to remember those who have made the ultimate sacrifice.

Our Hearts and Hugs go out once more to the families and friends of those who have lost their lives or been seriously injured.