Julie of Melbourne visited the Musee D’Orsay whilst in Paris in September 2019. She was thrilled to find there was a separate exhibition of the work of Berthe Morisot, in addition to the wealth of Impressionist paintings which are housed at the museum. These are Julie's words (sourced partly from Wikipedia) and her photos. 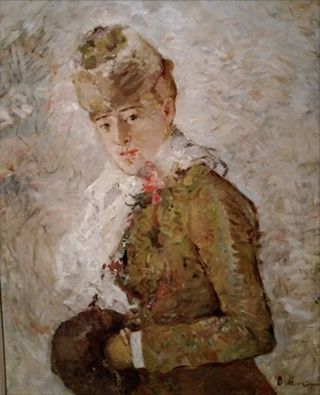 This exhibition was a collaboration of the Musee D’Orsay with the Musee des beaux-arts du Quebec, the Barnes Foundation in Philadelphia and the Dallas Museum of Art and is travelling to these places as well.

The Curator of the Morisot exhibition at the Musee D’Orsay, Sylvie Patry said that “there has never been a personal exhibition of her work in a Canadian public museum, and the last one in a national French museum took place in 1941”. This exhibition showed some 60 paintings of Berthe’s work, sourced from private collections as well as public museums such as the Marmottan.

It clearly shows her as a very versatile painter and watercolourist, and proficient in drawing and pastels as well. 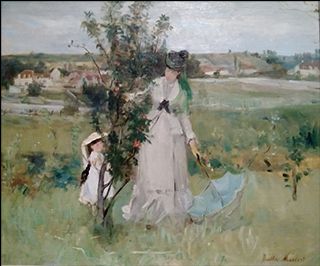 Berthe Morisot was a major figure of the art world from the 1860s through to her death in 1895, and yet she is still relatively unknown. She was a notable artist for a number of reasons, not least because she was a woman in the very much man’s world of art! She side stepped the accepted conventions for women of her time and, through her work, shone a light on the bourgeois lifestyle, Parisian fashion, the growing love for outdoor leisure pursuits, and the activities and scenes of daily life. 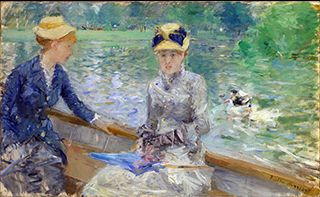 Berthe was born on 14 January 1841 in Bourges, France, to a well-off bourgeois family and moved to Paris when Berthe was a small child. She and her two older sisters learned about art as part of the education deemed appropriate for middle class girls at the time. In 1857, their art teacher introduced them to the Louvre, and the sisters spent time copying the paintings they saw there. But they did not receive any formal training as this was not thought to be a genteel occupation or career for ladies at the time. For example, the Ecole des beaux-arts did not allow women until 1897. Nevertheless, her parents were supportive of her stated intention to become a professional artist, and built her an art room at home, and Berthe continued to train in a number of private studios. 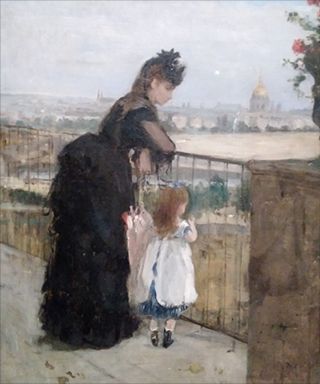 Berthe also continued to work at the Louvre as a copyist. There she met, and became friends with, artists such as Manet, Monet and Renoir. She became interested in painting outdoors, (which was the genesis for the movement which would later become known as Impressionism). She went to work outdoors with artists such as Corot and Oudinot, whose works are also on display at the Musee D’Orsay. She learned much from them. She would often work in watercolours and pastels outdoors as these were easier to carry.

In 1874, Berthe married Edouard Manet’s brother Eugene, who was also an artist, (though not as well known as his brother). Together, Berthe and Eugene had a daughter on 14 November 1878, named Julie Manet, (who also went on to become a very fine sketch artist and watercolourist.) Berthe was 37 at the time, and Julie was much loved as their only child. This painting is of Eugene minding his little daughter, Julie, and was novel in portraying the peaceful aspect of a father spending time with his small daughter outdoors, together enjoying the sunshine. 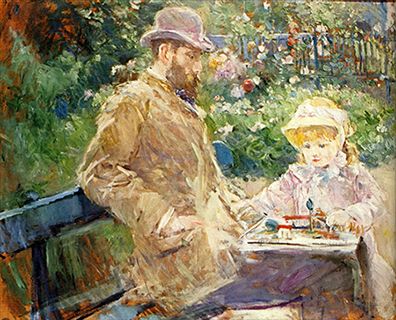 Berthe was also notable for being chosen to exhibit her work at the Salon of Paris for six of the 10 years between 1864 and 1874. This was the pinnacle of acceptance and recognition of an artist, and quite an achievement for anyone, and particularly a woman! During her lifetime, she presented her work in many Impressionist exhibitions in Paris and also exhibited further afield in Brussels and New York. She travelled extensively, to places such as Genoa, Pisa, and Florence, and even to London, the Isle of Wight, Holland and Jersey, USA. Quite a “modern” woman! 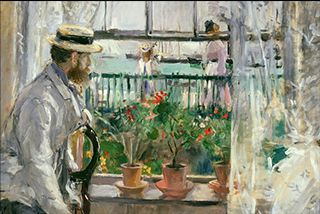 Despite this, it was hard for any of the Impressionists to gain a wider acceptance of their work during their lifetime. In fact, during Morisot's 1874 exhibition with other Impressionists, including Monet and Manet, Le Figaro (the newspaper) critic Albert Wolff noted that the Impressionists consisted of five or six lunatics of which one is a woman...[whose] feminine grace is maintained amid the outpourings of a delirious mind." (Quote credit: Harmon, Melissa Burdick. "Monet, Renoir, Degas...Morisot the Forgotten Genius of Impressionism." Biography, vol. 5, no. 6, June 2001, p. 98. EBSCOhost).

But by 1880, Berthe had achieved more acceptance, with many people describing her work as delicate, graceful, exquisite and charming. Many reviews, even that of that self-same art critic, Albert Wolff (above), later described her as among the best of the Impressionists. 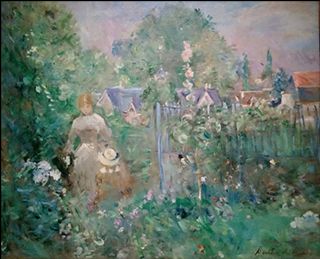 Berthe Morisot died on March 2, 1895, in Paris, of pneumonia contracted while looking after her daughter Julie with a similar illness. Julie was left an orphan at the age of 16, as her father had died previously on 13 April 1892. Julie went to live with her cousins, but more about that in another blog.

Berthe Morisot was a pioneer of her day. In 1894, she was described by Gustave Geffroy, a French journalist, art critic, historian, and novelist, as one of "les trois grandes dames" of Impressionism, alongside Marie Bracquemond and Mary Cassatt, (who we will also feature in future blogs).

Below is a portrait of Berthe titled "Berthe Morisot with a Bouquet of Violets" 1872 painted by her friend (and brother-in-law) Edouard Manet in 1872. 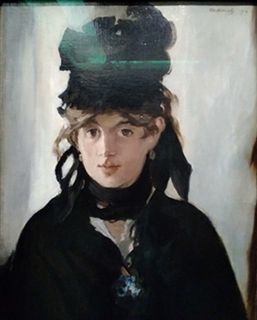 Edouard Manet painted Beerthe's portrait many times. This one was in mourning after the death of her father. Berthe bought this painting some time later when it came up for sale.

“My ambition is limited to the desire to capture something transient, and yet, this ambition is excessive.”

“A love of nature is a consolation against failure.” Berthe Morisot 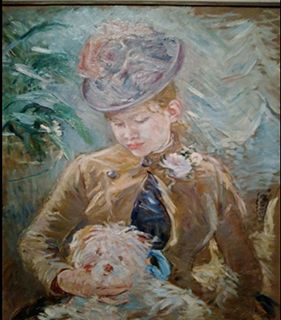 "A Little Girl with a Dog" 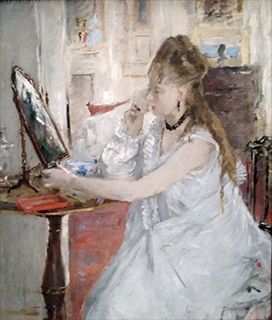 "Woman at her Toilette"

If you would like to read more detail about Berthe Morisot’s life--Click Here.

And to read an article from the Irish Times (January 2019) which also gives more insights into her private life and is titled: Berthe Morisot: ‘I have sinned, I have suffered, I have atoned’--Click Here.

Showcasing a video which has highlights of the ballet A Simple Man produced by the Northern Ballet Theatre which brings to life the characters painted by English painter L.S. Lowry.