Anton Pieck 1895 - 1987, was a Dutch engraver, painter, etcher and book illustrator. He enjoyed a long career which encapsulated almost the entire 20th century, even though one couldn't tell from looking at his art work. His drawings and paintings were always set in the past, particularly the 19th century. He made countless works with a cosy, nostalgic feel to them.1

The illustrator was well known for his portrayals of fairy tales, such as his iconic 'Fairy Tales of Grimm' (1940) and 'Arabian Nights' (1943-1956). For the latter monumental work Anton spent six weeks in Morocco to sketch local buildings and people to evoke a convincing Middle Eastern setting. Aladdin and the magic lamp is shown below 2. 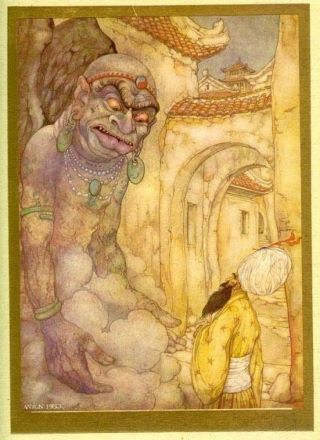 Aladdin and the Magic Lamp from Arabian Nights Credit:Lambiek.net

He studied at the Royal Academy of Fine Arts and the Bik en Vaandrager institute, both located in The Hague. During the First World War the Netherlands remained neutral however Anton Pieck like many others were conscripted and was on ‘standby” but spent most of his spare time drawing for his fellow recruits. After the war Anton became an art teacher at the Kennemer Lyceum in Bloemendaal. He would stay there until his retirement in 1960.

In the 1920s Anton Pieck published his first drawings. He had no interest in modern architecture. Instead he looked at nature and picturesque cities and villages. He made countless paintings, drawings, etchings and engravings depicting Dickensian scenes. People in high hat or crinoline taking coach rides, watching a magic lantern or listening to barrel organs or chamber concerts… they all contributed to his artistic ideal. Buildings, stairs, roads and wells had to look crooked, crumbled or rusty. So enamoured with traditional ideas, he made all his prints by hand, using an authentic printing press in his own house!

Whilst some think Anton Pieck's work is kitschy, I can see why he is still so popular. I love the detail in all these pictures and great fun for kids to find the numerous animals in the various pictures. How many animals can you see?

From 1938 on he started designing Christmas cards for the children's benefit organization Voor Het Kind, which were not only a success in his home country but also huge bestsellers in the United States. This led to a huge industry which reduplicated his paintings as imagery on greeting cards, calendars and puzzles.

Below is a perpetual birthday calendar that I have and still rely on after many, many years.

Anton put his talent to good use during World War II. He helped the Dutch resistance by counterfeiting official documents to mislead the Nazi authorities. He did his job so well that many were fooled and those who survived the war even had trouble convincing officials that these papers were faked. Anton also helped Jewish refugees hide in his home. He refused to become a member of the Nazi-controlled Kulturkammer, even though many artists were forced to do so at the time. 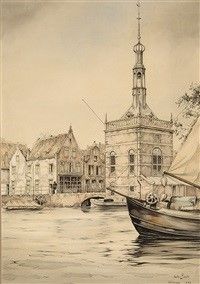 Anton's illustrations of Grimm's fairy tales directly led to Pieck's most famous contribution to Dutch popular culture: the theme park De Efteling. This fairy tale forest set in Kaatsheuvel opened in 1952. Walt Disney visited in 1955 for inspiration for his own theme park, Disneyland. Anton designed all the houses, buildings and animatronic inhabitants of the fairy tale forest, including Little Red Riding Hood at her grandma's house, Sleeping Beauty's castle, and Hansel and Gretel's gingerbread house and Hans Christian Andersen. He was responsible for giving basically every object, from the water fountains to the garbage bins, his own artistic touch. He wasn't too timid to remind the architects to build things as crooked as depicted in his designs. De Efteling today is still one of the biggest and most visited theme parks of the Benelux.4

After the war Anton Pieck was decorated as a Knight (1960) and an Officer (1980) in the Order of Orange-Nassau for his brave and noble accomplishments during World War II. The veteran received other honours too. In 1983 a bronze statue of his head was unveiled at Overveen and a year later he received his own museum at Hattem.

What did Anton Pieck think of the museum? In a documentary about the museum, he said:
“The longer you are dead, the more interesting the museum becomes, if everything goes according to plan. I particularly appreciate the fact that a museum is already being dedicated to me, …. that is something I should be grateful for. Yet I am not yet ready for a museum: I know so many people from history who have worked hard all their lives, who have accomplished much more than I have and who have never had a word of appreciation in their entire lives. When I compare myself to that I feel a bit of a spoiled Sunday child…"5

Even though he lived long enough to experience the 1980s the general public, including myself, assumed he was actually a 19th century artist who presumably passed away decades ago! He was incredibly popular during his life, his works remain instantly recognizable.