Jane has sent greetings from Bhutan and some delightful photos to take us on a journey with her as she experiences the only country in the world which has as its main aim to keep the people happy. Looks and sounds like a good place to be. And in line with our Blue Theme this week, Jane has sent this photo of the Blue Poppy, the national flower.

And now over to Jane who was welcomed into this fascinating country by a beautiful rainbow.

Bhutan is full of beauty, all the buildings follow a similar style as the King has decreed, window frames and eaves all beautifully painted. Bhutan is the last intact Himalayan kingdom, about the size of Switzerland yet just 700,000 people and home to one of the most astonishingly diverse natural and cultural ecologies on earth. It is often called the last Shangri-la. We could see why as we almost brushed the tips of the fir trees landing at Paro, the main airport. The hills and mountains covered with lush green trees, gurgling streams and farmland. So different from Tibet just over the border, where we saw no water in the rivers and the only trees are recent plantings.

The pristine environment and incomparably kindhearted people make this a truly extraordinary place. 75% of Bhutan is forest and in keeping with the environmental policy, must be maintained.

Punakha Dzong (fortress) said to to be the most beautiful in Bhutan and the winter residence of the official body of monks. Our room looks over the same view. Dzong(fortresses) are Bhutanese architectural masterpieces built to serve as administrative centers and the religious centre for the monks. They were also used as garrisons by the army and people gather in the dzong courtyards during festivities.

The main export is hydro electric power - primarily to India, but also Nepal and Bangladesh. Apples rate as No 2 - all sold to India, with No 3 being tourism. There is no trade with China and few Chinese tourists. Hiking is popular, however Chinese and Indians are not permitted to hike!

We spent some time sight seeing in Thimphu. Our guide and driver were very interesting and had good English. A big Buddha is being built overlooking the city, the diamond between his eyes worth $US100million - it’s so high up it’s hard to see and as it’s an uncut stone, seems a waste. It was supposed to be finished by now, but apparently large sums of money have been misappropriated - and would you believe by an ex Buddhist nun - I suppose that’s why she is “ex” now! So even in a country know as the last Shangri-La there are corrupt people.

We did a short hike around the hills, through a forest of trees and prayer flags - Thimphu nestled in the valley surrounded by lush green mountains. We visited a weaving factory and a paper making factory: OH&S doesn’t exist over here.

At the library, in one of the smallest countries, we saw the largest book in the world - 2m high and 68kgs - commissioned by an American guy - each month a page is turned to reveal fabulous photos of Bhutan. We called past the Takin Reserve to see the weird national animal of Bhutan. The Takin said to be part goat, part antelope apparently created by the Mad Monk - Bhutan is filled with strange myths and legends. Thimphu is the capital and home to the Royal Palace were we watched the guards lower the national flag (hero image) and to visit the Dzong, located in the royal grounds and the summer home of the offical body of monks.

The people hold the King in high regard, he lives in a palace, but it’s not large or ostentatious; he is interested in the well being of his people and as an example, will offer land to impoverished farmers. We asked about Gross National Happiness: there are 4 key pillars: good government; maintaining cultural traditions and Bhutanese heritage; conservation and nature; Health and Education (which are both free).

In keeping with these philosophies, it’s illegal to sell cigarettes in Bhutan, although you are permitted to smoke; there are no traffic lights; All the buildings have ornate eaves, including balconies, door or window frames- motifs are painted on the exterior walls - however the ground floor is a mishmash of disheveled shop fronts, battered signs and broke footpaths!

The people are kind and friendly, often dressed in their National Costumes. The children all wear national costume to school. Many speak English, as it is taught as the second language at school. Meals were simple and modest; fresh locally grown produce - asparagus, egg plant, crisp apples, the best cucumbers I’ve ever tasted; chicken and some pork along with many Indian dishes and the staple red rice grown in Bhutan and chilli cheese - a favourite of the locals. The local beer and red wine quite palatable. For our included lunches, always a special table set up for us, the waitresses a sheer delight, as were the staff in the hotel dining rooms.

We shared the road with cows, horses, a few monkeys and on two occasions spotted pilgrims prostrating on the highway - how far had they come? And would they survive the lorries thundering past? Overtaking quite common on the hairpin bends, drivers courteously stopping or slowing down - a little nail biting for us, but our driver wa excellent. Farmers were hard at work in the paddy fields We spent 6 days in Bhutan, visiting 3 valleys - all a little different, all beautiful. Our three hotels were in wonderful locations - Thimphu, overlooking the city and the Memorial Stupa, where locals focus their daily worship. Punakha with its stately Zhong located by the river. Each of the 20 Bhutanese provinces has a Zhong with this one being considered the most beautiful. No photos allowed in the temples, but here is an example of 2 paintings on the courtyard walls - quite exquisite.

Our hotel in Paro was built to celebrate the crowning of the 4th King in 1974, and the first of a few hotels to accomodate tourists and hence the beginning of tourism in Bhutan, where conservation and cultural heritage remain paramount - as decreed by the King and well ahead of his time. We stayed in a gingerbread cottage, overlooking the valley - a taste of Shangri-La. The current 5th King is humble and benevolent, considered to be a King for the people; encouraging democracy, balancing the need for progress in what is still a very poor country, without eroding the concept of Gross National Happiness.

As a Buddhist nation we were immersed in strange myths and legends; the importance of preparing for the next life, rather than focusing on this one; visiting the Zhong in each of the 3 provinces - all built in the 17th century.

Tigers Nest is drawcard for most tourists - a holy site that clings to a sheer cliff face 900 meters above the Paro Valley. It was first built in 1692 at a cave where Guru Rimpoche meditated in the 7th century A.D. Legend states that he flew to the site atop the back of a tigress and meditated in the cave for 3 years, 3 months, 3 days and 3 hours in order to subdue evil demons residing within it. The cave since considered sacred - used for meditation by many famous saints. Many complete the 3 hour return hike to the viewpoint or 5 hours to visit it, but we declined. 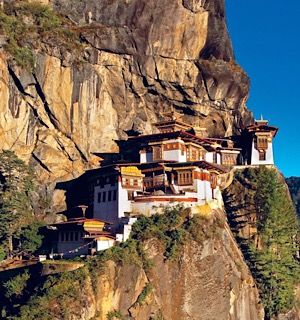 The people are gentle and gracious - no hard sell in the shops or street stalls, which makes a refreshing change. We browsed the stores in Paro today - souvenirs are similar to those all over Asia and quite expensive, chatting with the locals was our highlight - beaming faces, lovely smiles.

On our last afternoon we visited one of the oldest temples in Bhutan, back to the 8th century - it’s small with the timber floor well worn -indentations of feet mark the spot where thousands of prostrations have taken place over the centuries; the head monk of the province sat on his dais, quietly turning the pages of age old scriptures, murmuring the well read text. A gentle end to a gentle holiday in a gentle country.

Gross National Happiness (also known by the acronym: GNH) is a philosophy that guides the government of Bhutan. It includes an index which is used to measure the collective happiness and well-being of a population. Gross National Happiness is instituted as the goal of the government of Bhutan in the Constitution of Bhutan, enacted on 18 July 2008. (Wikipedia)

All photos are Jane's unless otherwise stated.

Showcasing some examples of Delft Pottery. Delft is also known for Delft porcelain called Delft Blue (Delfts Blauw), traditionally created with blue decoration on a white background styled on the Chinese porcelain of the Ming and Kang Hsi dynasties.