It is Saturday morning DownHere in Melbourne, Victoria, Australia and I am delighted to welcome another new subscriber: E2 in Melbourne. We have several E subscribers so they must have a special interest in art. E1 in Melbourne is about to celebrate a very special birthday and so we are preparing a blog for a 90th birthday. Please send in your ideas. And a special good morning to E in London, El in London and all our subscribers and followers around the globe. Thank you for helping us foster an appreciation of art through life. And now back to Matisse and Picasso.

The analogy to a Boxing Match1 between Matisse and Picasso, two giants from the world of art, is most apt. After meeting in 1906, they continued to spar for the next 48 years until Matisse's death in 1954.

After Matisse died, Picasso created a series of homages to his friend and rival. Below is The Women of Algiers (after Delacroix) by Picasso 1955 which combines Matisse's interest in Morocco and admiration for artist Eugene Delacroix's painting Women of Algiers in their Apartment 1834. While Picasso's longstanding cubist style pervades in the subject's multpile viewpoints, he channels Matisse's rich colours, complex patterning of fabrics, clothing and architectural forms, particularly the inclusion of a window. (Exhibition Label)

As part of his homage to Matisse, Picasso also painted The Studio (L'Atelier) as shown below where he replicates one of Matisse's favourite subjects: an interior scene with a view through a window.

The setting is of the large studio in Picasso's villa, La Californie, near Cannes. He acquired the home in mid-1955 to seek privacy from growing public scrutiny. The elaborate Art Nouveau French windows open onto a palm tree-filled garden. The lack of human presence in the composition accentuates the theme of absence. (NGA Exhibition Booklet)

What really impressed me as I took in the volumes of information in the Matisse and Picasso Exhibition was the way both men embraced life and change, each portraying their perceptions in a variety of ways.

Even though they came from different backgrounds - Matisse from a conservative Northern French environment, Picasso a Spanish childhood prodigy from an artistic family- they had much in common. Both indulged in a variety of mediums apart from their paintings that they are so quickly associated with.

I was interested to learn that both Matisse and Picasso were involved in working with Sergei Diaghilev - the impresario of the Ballets Russes.

Picasso was the first to succumb to Diaghilev's powers of persuasion, in fact he married Olga Khokhlova, one of the company's principal dancers. Below are some of the costumes designed by Picasso (influenced by his Spanish roots) for Le Tricorne (The three-cornered hat). 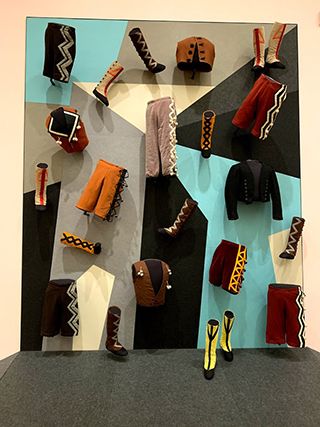 Eventually Matisse followed Picasso's excursion into designing costumes and he worked with the Ballets Russes in 1919 on Le Chant du rossignol (The song of the nightingale) as shown below.

According to the NGA Exhibition notes For Matisse the project was extremely fraught. He felt pressure to create something more wonderful and popular than Picasso and was constricted by Diaghilev's controlling oversight. Caught between emulating the ornate style typical of early Ballets Russes productions and taking a starker, more modernist approach, he attempted to do both, an approach derided by critics. (NGA Exhibition Booklet) 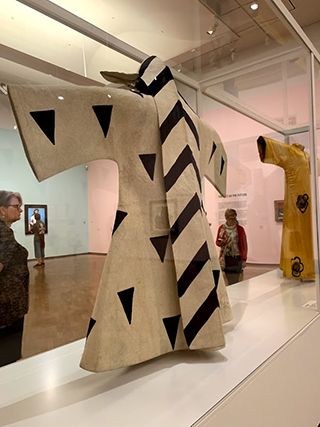 Ultimately, Matisse and Picasso took their initial shared interests and influences in different directions — Picasso becoming more interested in sculpted forms on the canvas which brought movement to Cubism.

Below is Large Nude on a Red Chair (Grand nu au fauteuil rouge) painted by Picasso in 1929 that demonstrates his reaction to the limitations of early Cubism, particularly its static nature.

In contrast Matisse focused on colour and 'flattening' the image so that the background and foreground merged as one as seen below in the Reclining Odalisque.

There is so much to say about these two Art Influencers but it is time to move on. I will leave you with some words said by Matisse and Picasso about the other.

'When one of us dies, there will be some things the other will never be able to talk of with anyone else.' Henri Matisse, 1949

'Nobody ever looked at Matisse's work as thoroughly as I did. And he at mine.' Pablo Picasso, 1967

*Images unless otherwise stated were taken by Anne Newman at the Matisse and Picasso Exhibition, Canberra.

We begin to explore the friendship and rivalry between Henri Matisse and Pablo Picasso with examples from the Exhibition of their works at the National Gallery Canberra.