We have just commemorated Armistice Day on the 11 November to mark the armistice signed between the Allies of World War I and Germany at Compiègne, France at 5:45 am, for the cessation of hostilities on the Western Front of World War I, which took effect at eleven o'clock in the morning—the "eleventh hour of the eleventh day of the eleventh month" of 1918.2

The world only enjoyed 21 years before World War II broke out and this time there was a new threat from the sky: the threat of being bombed.

Although some bombing occurred during WWI in Europe, in Australia and New Zealand so far from Europe, there was no threat to the civilians from sky attack.

From my research it would appear that by 1941 Australia was taking the need to build air raid shelters seriously though they had been built much earlier in the northern hemisphere. Private citizens began to build their own shelters and councils employed as air raid wardens, older men who could not partake in active service.

But air raid shelters are far from our minds in the C21st.

Zooming in to the turn off onto Port Gibbon Road the nest of farm buildings can be seen huddled around the crossroads.

Continuing to fly above the landscape you would see some tiny shapes in the paddock below.

Zooming down to the road view and the shapes in the paddocks are revealed as igloos. Igloos? But who put them there and why?

A little while back we showcased some photos of ruins taken by South Australian Rob Nankivell. Rob also sent me photographs he had taken of Igloos (Radar Station 203) that are located on Port Gibbon Rd on the Eyre Peninsula near Port Gibbon, South Australia. 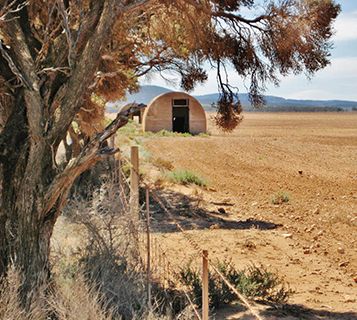 These Igloos were constructed during the Second World War to be used as air raid shelters, large barracks and two for radio location towers each 132 feet high. Construction of the site was almost finished when peace was declared so the towers and sheds were sold in 1946. The towers were sold for ten pounds each.4

This Department of Defence site was featured on the TV Program - Postcards, so here are the details from that segment.

In a wheat paddock about eighteen kilometres from Cowell on Eyre Peninsula stand some remarkable structures. The igloo like landmarks are well known by locals today but their initial purpose dates back to a time when it seemed Australia faced an imminent invasion by the Japanese. The story of the cement structures is shrouded in secrecy even today.

The Royal Australian Airforce built them in 1942 - the nation's darkest hour - when the bombing of Darwin brought the war home to all Australians. With the defence of important industrial cities Port Pirie and Whyalla considered paramount, the RAAF set about the construction of Number 203 Radar Station. Smaller huts were built to house generators and within the shadow of the little shack village at Port Gibbon stand the ruins of the men's quarters. Sixty-six years on from the construction of the two main radar huts the details about the operations of this top-secret facility remain sketchy.

Lyndon Carmody: "They had the most advanced radar system of the time suspended between the towers. There would have been a huge series of antennae going across one hundred and thirty odd feet up and then across."

Another local farmer, Gerald Beinke also got quite a shock when he finally returned from service in Darwin. He says similar stations near Ceduna and Port Augusta were meant to act hand-in-glove with this facility to provide three reference points on aircraft entering Eyre Peninsula air space.

Today the strange cement igloo like structures cause many a tourist to pull over on the dirt roads at the back of Cowell just as they did more than sixty years ago.

Despite all the secrecy and effort Radar Station 203 was never used. The defeat of the Japanese at the ‘Battle of Midway’ lead to the scrapping of this radar project and over time farmers dismantled the radar towers using the wood for shearing sheds and the like. The concrete structures got a guernsey as well - hosting dances and picnics for the locals.

Today they remain an intriguing landmark from a different time when Australia was under attack. The remains of radar station 203 can be seen from the Port Gibbon Road about eighteen kilometres from Cowell on Eyre Peninsula.4

Thank you to Rob Nankivell for bringing to us this fascinating story about some unusual structures. If you have photos and a story of unusual structures please contact us via the return email on your daily AnArt4Life post.

Credits
1. All photos of the "igloos" are shown with the permission of the photographer Rob Nankivell.
2. en.wikipedia.org
3. google.com
4. geocaching.com
5. A cocky is Australian slang for a farmer. Hallwyl House in Stockholm was a palatial residence built as a winter home in 1898, for the Count and Countess Walther and Wilhelmina von Hallwyl. The museum stands as a unique testimonial of the lifestyle and décor of the late Victorian period in Sweden. Image credit: Commons.wikimedia.com