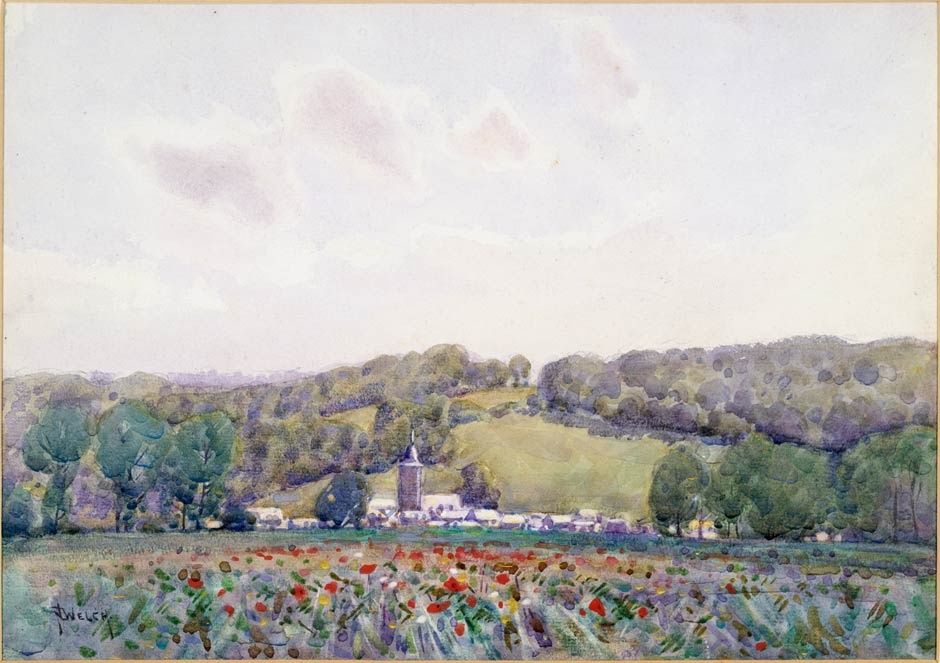 The AnArt4Life blog is going to commemorate Anzac Day this year through the paintings of New Zealand's first war artist Nugent H. Welch. The painting above is the Village of Pas, Somme painted by Nugent H. Welch in about 1918. Note the poppies in the field. And below the transport carrying troops through the ravaged countryside. 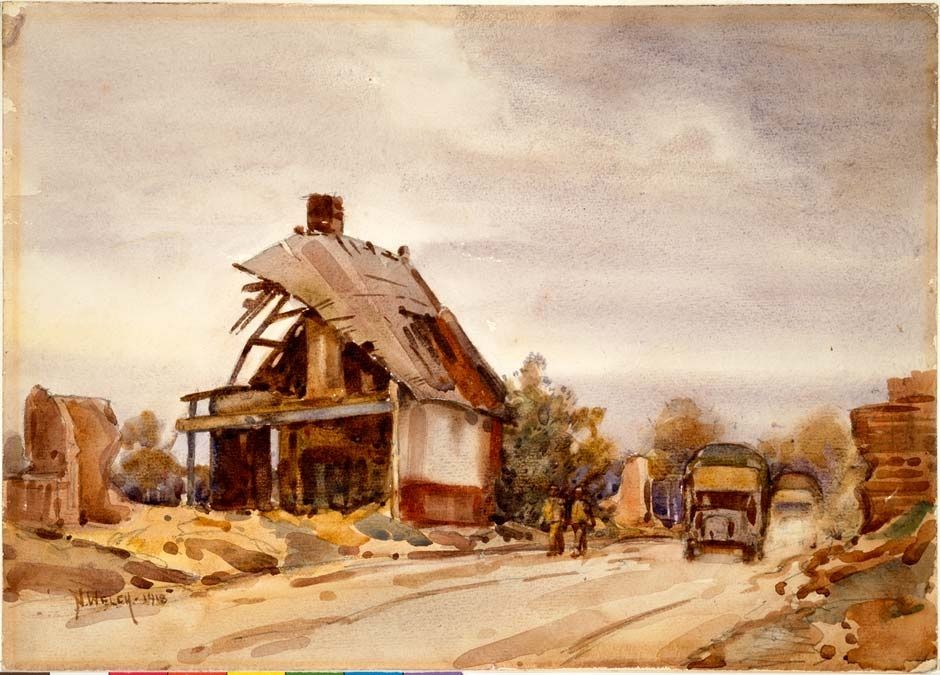 Anzac Day is a national day of remembrance in Australia and New Zealand that broadly commemorates all Australians and New Zealanders who served and died in all wars, conflicts, and peacekeeping operations and the contribution and suffering of all those who have served. Observed on 25 April each year, Anzac Day was originally devised to honour the members of the Australian and New Zealand Army Corps (ANZAC) who served in the Gallipoli Campaign, their first engagement in the First World War (1914–1918).2 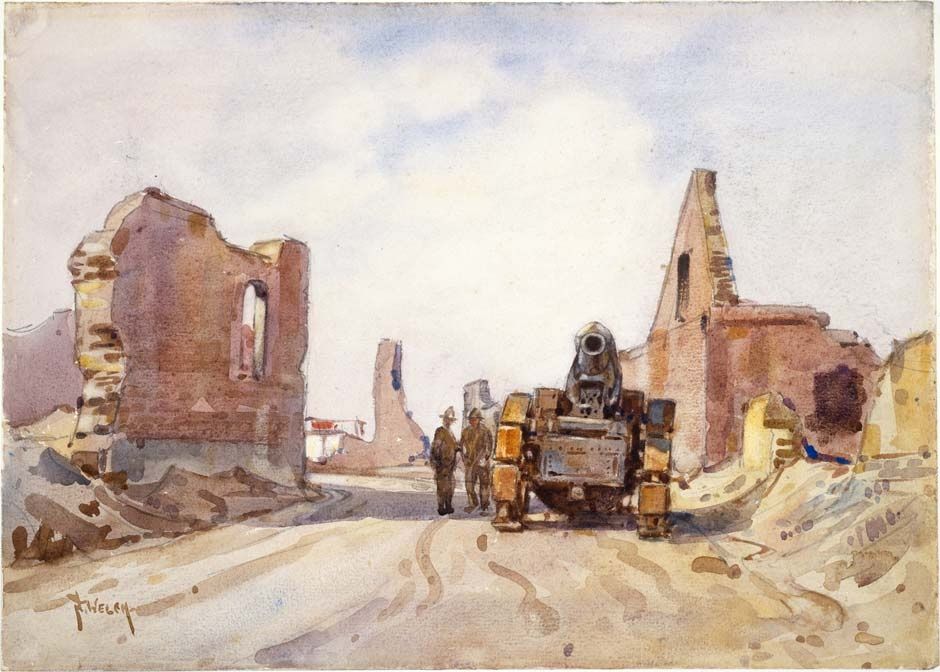 Nugent Herrmann Welch was New Zealand’s first ‘war artist.’ The 32 works that he made as an official war artist stand as a unique and highly personal record of New Zealand’s involvement in the First World War from the perspective of a soldier who served within the New Zealand Expeditionary Force (NZEF).1 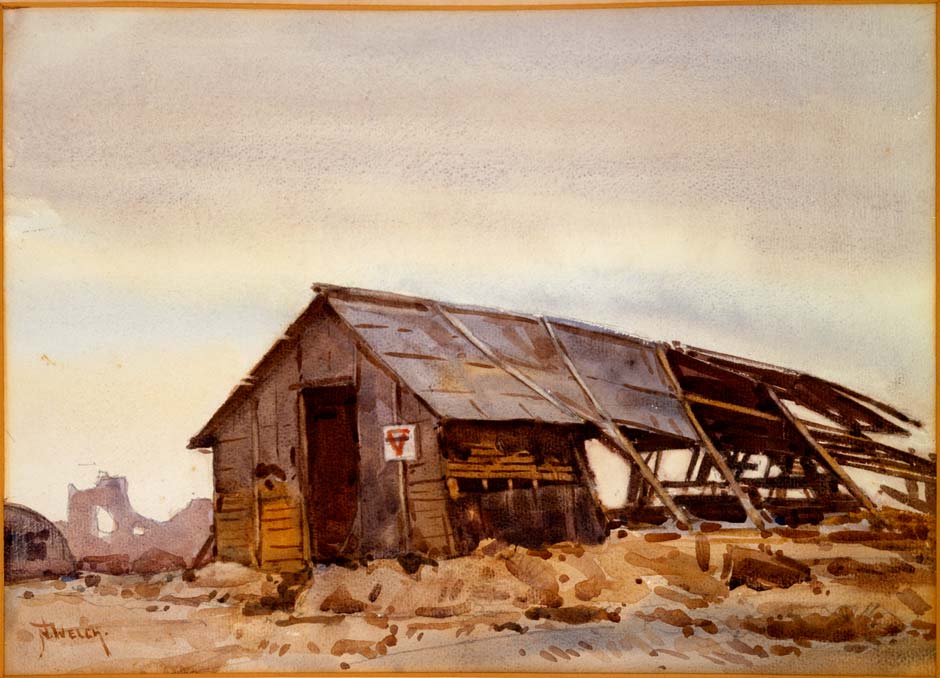 Akaroa-born but raised in Wellington, Welch was interested in art from an early age...After a stint as an accounts clerk with the Wellington Harbour Board, Welch resigned in 1907 to became a full-time artist.

Welch's career was interrupted by the First World War. He enlisted with the NZEF in March 1916, was sent to the Western Front and spent almost two continuous years in the trenches, including service in the horrific Passchendaele offensive.3

The Third Battle of Ypres, also known as the Battle of Passchendaele , was a campaign of the First World War, fought by the Allies against the German Empire. The battle took place on the Western Front, from July to November 1917, for control of the ridges south and east of the Belgian city of Ypres in West Flanders, as part of a strategy decided by the Allies at conferences in November 1916 and May 1917. Passchendaele lies on the last ridge east of Ypres, 5 mi (8.0 km) from Roulers (now Roeselare) a junction of the Bruges (Brugge) to Kortrijk railway. The station at Roulers was on the main supply route of the German 4th Army. Once Passchendaele Ridge had been captured, the Allied advance was to continue to a line from Thourout (now Torhout) to Couckelaere (Koekelare).2 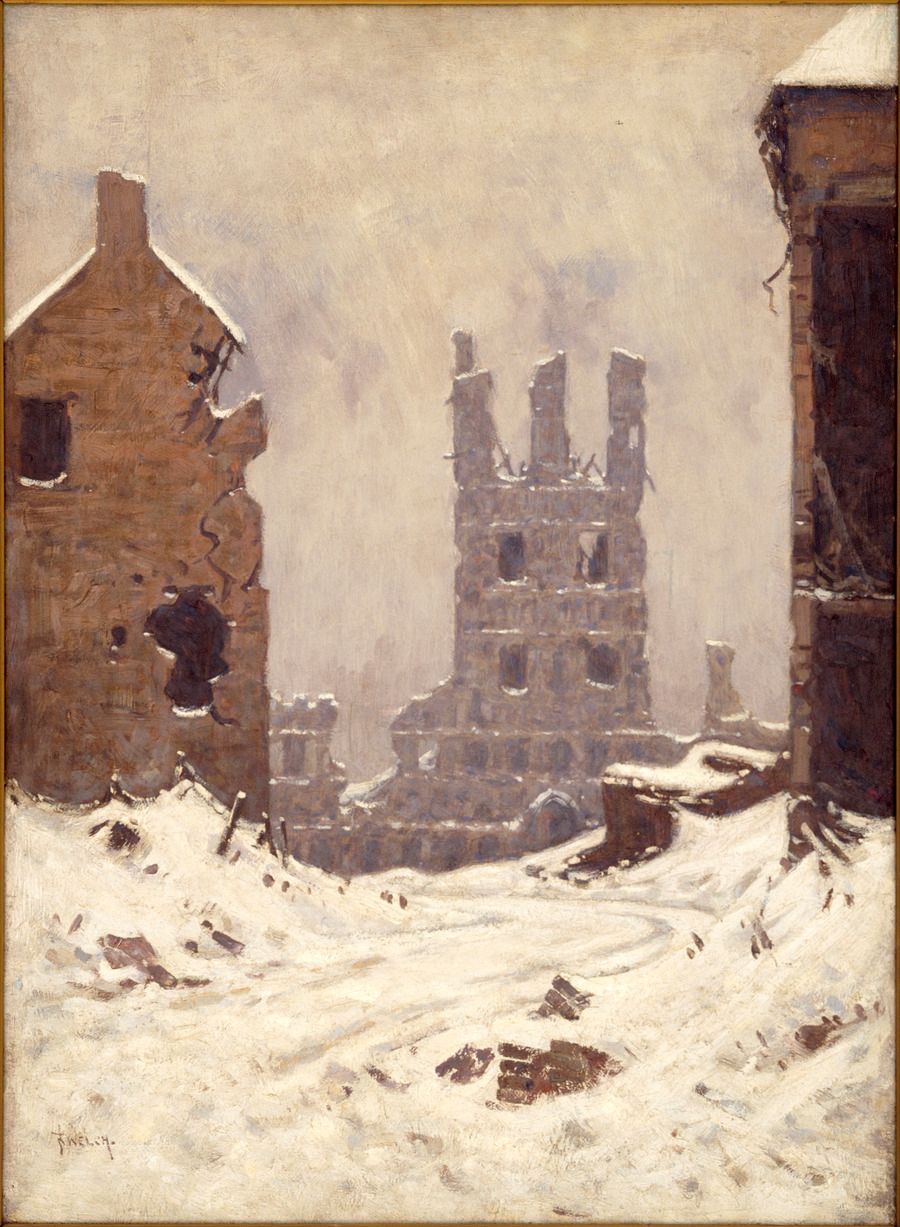 In February 1918 Welch responded to the call for official artists and was accepted by the War Records Office in London on the basis of his exhibition history in New Zealand and Australia. This new role gave him the freedom to paint again after years of soldiering and the time to process the difficult memories of his war experience. Welch revelled in the opportunity, declaring in a letter to his mother that: ‘you can rest assured that I am throwing my whole heart into it, and I do hope that I shall produce something of real worth to my own dear land.’3

Welch was given the title of Divisional Artist and assigned the basic task of recording the ‘depots, hospitals, and camps, special appliances’ used by the New Zealand Division. His official war paintings are mainly soft-toned watercolours that focus on the aftermath of fighting and the debris of battle.3

Descriptions of Nugent Welch by colleagues and friends invariably refer to his profound love of nature. Throughout his life he was most likely to be found painting or sketching outdoors, particularly around the rugged landscape of the Wellington region.

Welch was a true protege of early New Zealand landscape artists Petrus van der Velden and James Nairn, who both strove capture the essential beauty and power of nature in their paintings. Welch was therefore deeply affected by his confrontation with the complete devastation that years of heavy artillery bombing and trench warfare had wrought on the famously beautiful landscapes of France and Belgium. Many of his paintings of the Western Front accentuate the extreme unnaturalness of an environment denuded of trees, pockmarked by shell craters, riddled with trenches and covered in twisted debris.3 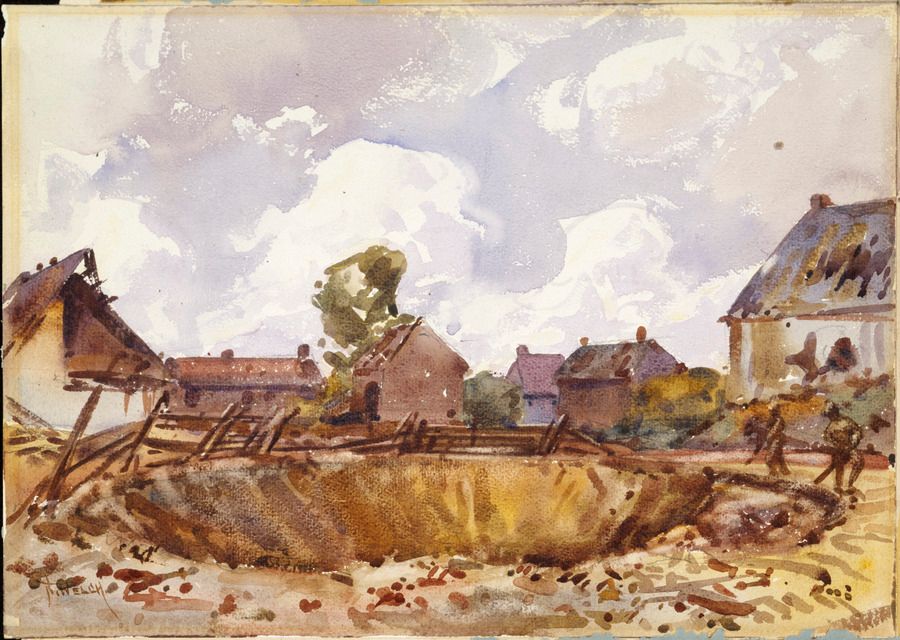 We remember those who gave their lives in WWI and in all wars so that the world would be a more peaceful place for all people.

We remember also those who today are fighting in different ways and different enemies so that we can all live peaceful lives.

What beckons is a tour through the beautiful and stunning scenery of Slovenia which according to our tour guide, Rick Steves, is the least visited and most underrated of Europe's alpine countries. Some interesting architecture and murals for you to learn about.