We recently featured the beauty of the stars in the night sky through the work of many inspired photographers around the world, click here to check back.

But the stars in the night sky have also been a source of fascination for artists over the centuries, from prehistoric rock paintings in caves, right through to today.

Today we will feature two of the most well known, by Vincent Van Gogh. They were painted in 1888 and 1889 respectively, and we will look at them individually, starting with Starry night over the Rhone: 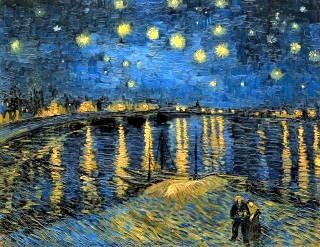 I was priveleged to see Starry Night over the Rhone at the Musee D’Orsay in Paris when I was there in September 2019.

It is the sort of painting that you can look at for a long time, painted almost entirely in contrasting blues and yellows, with thick brushstrokes that create the twinkling of the stars and the movement of the flowing river, as seen in the close up below. Nevertheless, it is still a calm and peaceful painting, which is unusual considering Van Gogh’s usually chaotic and tortured mental state.

It was painted on the bank of the Rhône that was only a one or two-minute walk from the Yellow House on the Place Lamartine, which Van Gogh was renting at the time, (which he also painted).

The challenge of painting at night intrigued van Gogh. He had grown increasingly interested in the effects of light—particularly the artificial illumination of the newly installed gas lamps—at night. The vantage point he chose for Starry Night over the Rhone allowed him to capture the reflections of the new gas lighting in Arles across the glimmering blue water of the Rhône. In the foreground, two lovers stroll by the banks of the river.1

Depicting colour was of great importance to Vincent. In letters to his brother, Theo, he often described objects in his paintings in terms of colour. Van Gogh described this composition in a letter to his brother Theo:1 ”The sky is aquamarine, the water is royal blue, the ground is mauve. The town is blue and purple. The gas is yellow and the reflections are russet gold descending down to green-bronze. On the aquamarine field of the sky the Great Bear is a sparkling green and pink, whose discreet paleness contrasts with the brutal gold of the gas. Two colourful figurines of lovers are in the foreground.” 1

In reality, the view depicted in the painting faces away from Ursa Major, which is to the north. The foreground indicates heavy rework, wet-on-wet, as soon as the first state was finished.1

The next painting, simply called The Starry Night, is completely different in its composition:

Realizing the severity of his mental health issues, after his mental breakdown, van Gogh decided to leave Arles and check himself into a mental health facility called Saint-Paul-de-Mausole, in the nearby Saint-Rémy-de-Provence.2

At the asylum, van Gogh observed the night sky from his barred bedroom window and wrote a letter to his brother, Theo, describing a magnificent view of the morning star very early one morning in the summer of 1889. 3

In The Starry night we see a night sky with white and blue swirls, a glowing yellow crescent moon, and bright stars all radiating light. One or two cypress trees, often described as flame-like, tower over the foreground to the left, their dark branches curling and swaying to the movement of the sky that they partly obscure. Amid all this animation, a structured village sits in the distance on the lower right of the canvas. Straight controlled lines make up the small cottages and the slender steeple of a church, which rises as a beacon against rolling blue hills. The glowing yellow squares of the houses suggest the welcoming lights of peaceful homes, creating a calm corner amid the painting’s turbulence.3

Painted just a few months apart, The Starry Night and Starry Night Over the Rhône are similar in their subject matter. However, there is a drastic divergence in their undertones. Whilst tranquility, colour and the depiction of the effects of illumination were the focus of the first painting, movement and animation are the focus of the second, with “the violence of his troubled psyche fully expressed.”2

During his stay at the asylum, Van Gogh adopted an extra room as an artist’s studio and completed 150 paintings, including The Starry Night, above. It was a prolific period within his short ten year career, before an early death at his own hand in July 1890, aged just 37, leaving a legacy of over 750 paintings.

Lastly, I leave you with a video of the magnificent digital exhibition of Vincent Van Gogh’s work at L’Atelier Lumieres, which I was privileged to see in Paris in September 2019. The exhibition was called ”Starry, starry night” which shows just how famous these two works are. Click here for a link to that blog post. How many stars can you see at night? Do you ever look up to see? Come with us on a journey of the beautiful night skies around the world. Image: Shlomo Shalev, Unsplash.