I have just received an email from John Pickup saying that in line with the posts I have been showing on Naive Painters we need to showcase some of the works of Sam Byrne, who lived and painted in Broken Hill, New South Wales.

Samuel Michael Byrne (1883-1978), miner and artist was born in 1883 at Humbug Scrub, near Gawler, South Australia. In 1885 the family moved to Thackaringa, New South Wales, and later to nearby Broken Hill. In 1898 he began work in the Broken Hill Proprietary Co. Ltd's mine. For fifty-one years he worked as a miner, both as an underground labourer and surface engine driver, until he retired in 1949.2

And upon his retirement in the 1950s, Sam Byrne took up painting seriously using his unique style and perception of past and present times in the Broken Hill area and beyond. 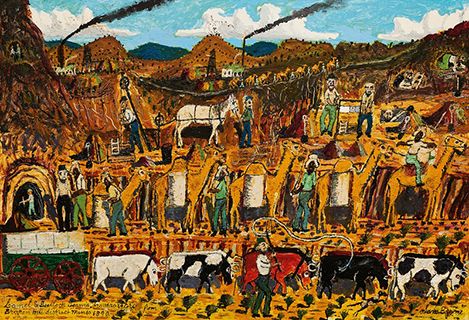 Sam was partly guided by May Harding, an art teacher at Broken Hill Technical College. He won prizes at local art shows and was encouraged by the Melbourne painter, Leonard French, who introduced him to a number of gallery-owners. Sam Byrne exhibited to critical acclaim at the Rudy Komon Art Gallery, Sydney, in 1963 and 1968, with 'Pro' Hart at the Australian Sculpture Centre, Canberra, in 1968, and later with the (Kym) Bonython Art Gallery, Adelaide. 1

You will notice dates on some of Byrne's paintings indicating that he was receating scenes from the past, the events no doubt being recorded in local newspapers and part of the local oral history.

Apparently however Sam Byrne's earliest artistic endeavours took place underground where he would sketch scenes onto timbers deep in the mines where he worked. 1

Essentially self-taught, Byrne used a miniaturist technique, disregarding perspective and most academic painting conventions. Although he produced some water-colours, he preferred oils or synthetic enamels on masonite, and sometimes sprinkled silver-lead ore on his pictures to make them sparkle.1

The painting below is an example of one of Byrne's works which is covered in pieces of mineral. The camel drivers known as cameleers came to Australia more than 120 years ago from Afghanistan and the provinces of modern day Pakistan and India. They were an essential part of survival in the outback, transporting goods and essential supplies across the desert nation from pioneer town to town, to the mines, and across the sandy continent to the cattle and sheep stations.

Life in the mines and a mining town such as Broken Hill was tough and the paintings of Sam Byrne capture many of these more difficult and sometimes tragic times. The first of these depicts the Broken Hill miners covering the strike breakers from the 1892 strike in tar and feathers.

Accidents were frequent and deadly and here Byrne has receated a mine explosion from 1900.

Natural disasters dominate outback life which Sam Byrne captured in dramatic patterns of line and colour. The first example of the dust storms below features the Afghan camel drivers being engulfed by the waves of red dust.

I lived in the Northern Territory when younger and saw plenty of dust storms; but I had forgotten how absolutely terrifying they are and what far reaching effects the storm causes. At the end of 2019, here in Victoria, Melbourne was covered in the red dust from the storms that were born in the desert of southern New South Wales nearly 1000 kms away.

Silver City is the name given to Broken Hill which was built on mining silver, lead and zinc and once had the world's richest deposits of these precious metals.

As Dorothea Mackellar said:
I love a sunburnt country, a land of sweeping plains
Of ragged mountain ranges, Of drought and flooding rains.

And so did Sam Byrne. The flood, although appallingly dangerous and damaging, in Byrne's painting has the humour that many naive artists cherish: take note of the stranded goats and rabbits - the curse of the outback. The emus and kangaroos are okay but look at all those stranded goats who do like to climb trees and the rabbits marooned on an island.

The inevitability of being bogged in the desert is depicted below but also the help that sometimes came along; in this case Afghans and their camels pull the bullocky and his wagon from the boggy soil.

What you will see emerging in these paintings, apart from the narrative that accompanies each image, is the strong sense of pattern and colour which hold the details in context.

When Sam Byrne was living in the Australian outback one of the most common problems to be faced was the plagues of rabbits. The amount of detail, so typical of naive art, is dramatic and gives emphasis to the overwhelming numbers of rabbits which have invaded the countryside. In all the drama of movement going on in these paintings, Byrne has strictly adhered to his discipline of creating patterns to create harmony and continuity.

His paintings also have an illustrative or graphic quality which helps tell the story so present in the two images below.

I am delighted to have discovered that Sam Byrne painted in a shed just like our subscriber, naive artist John Wylie from Port Elliot in South Australia.

Upright and slim, with a wide grin, Byrne loved music and dressed in a pin-striped suit when he visited Sydney.2

Sam Byrne's paintings bring us all the dimensions of life in a mining town and his images of the pleasure activities are delightful. What do miners do at the end of a day shift? They go to the pub! Thackaringa was a small silver mining town west of Broken Hill and where Sam Byrne lived in his younger years. 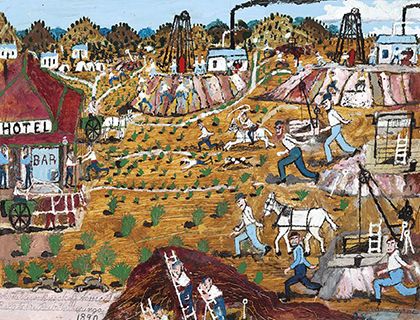 Whistle Blows, Knock off Time. Race to the Pub, Thackaringa (Credit: No 3)

And the weekends are for watersports with family and friends.

Through the works of Sam Byrne we have a record of life in Broken Hill and surrounding countryside from the early frontier days to the outback town becoming a Silver City.

I have read that Sam Byrne had a fascination with maps and mapmaking and this is evident in his graphic approach and interest in railway tracks, roads, the mining structures. He also liked to paint panoramas as shown below in Broken Hill Line of Lode, painted in about 1970. The painting is an oil and enamel on board, inscribed and signed Memory Painting by Sam Byrne, dimensions: 60cm x 182 cm

Sam Byrne died on 24 February 1978 and is buried in the Broken Hill Cemetery.

We will farewell him with one of his panoramas The Silver City (1960) demonstrating his fastidious attention to detail and his cartographic skill.

If you would like to examine more paintings by Sam Byrne please follow the Bookmark link below. His works are not only charming, they are a record of the life of the ordinary people who lived in and around Broken Hill in the early years of the C20th.

Tomorrow we are off into a completely different world: the world of Smiths - a brilliant coppersmith from Virginia USA to be precise.

Continuing our exploration of naive art I take you inside my home and share some of the naive works I have purchased over the years most of which were created by Croatian artists. Image: Painting by Duro Jancic