The first I knew about Noel Wood was when A of Wheelers Hill gave me an article from The Age newspaper reporting that the sale of 59 of Wood's paintings had been cancelled due to a claim made by Wood's daughter that many of the paintings are possibly fake. Whether this claim is true or not doesn't concern us at this stage but what does interest me is that I have unearthed yet another incredibe story about an artist obsessed with expressing his artistic talent. So let's get to know the real Noel Wood.

Wood was born in 1912 in Strathalbyn, South Australia. He was the fourth son of Rev. Tom Percy Wood (1880 - 1957) and Fannie (née Newbury, 1880 - 1969). His elder brother, Rex Wood (1906 – 1970) was also a noted artist. His grandfather, Thomas Percy Wood (1855 – 1937) was an accomplished watercolourist (Ref: State Library of South Australia). So once more we uncover a dynasty of artists and give further strength to the argument that DNA plays an enormous role in the making of an artist. However if you are surrounded by people drawing, painting, sculpting, it is likely you would be tempted to have a go and learn from those around you.

From what I can find online Noel Wood painted still life, portraits and scenes from his island hideaway. 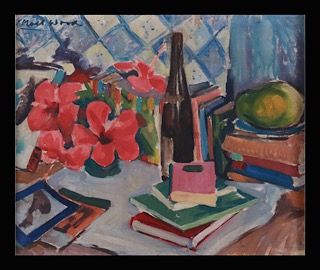 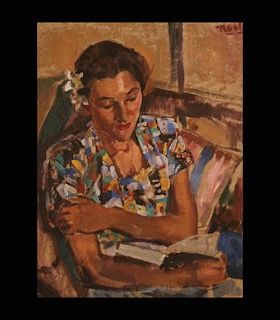 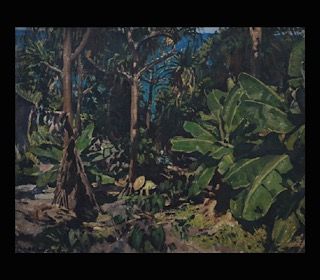 Noel Wood attended Art School in Adelaide where his tutor was Marie Tuck, another wonderful early Australian artist and art educator. Wood is considered to be one of the first painters to depict the far North Queensland in works of fine art.(The Age, 3 May 2019) But let's start when he left Art School in Adelaide.

Following his marriage to Eleanor Weld Skipper in 1933 whom Wood met at art school, he first lived and painted on Kangaroo Island off the coast of South Australia for a couple of years. Sadly I couldn't find any images of the paintings he did at this time.

Noel Wood and his wife Eleanor then set out in a T-model Ford to find an island of their own settling on 15 acres on Bedarra Island, North Queensland. 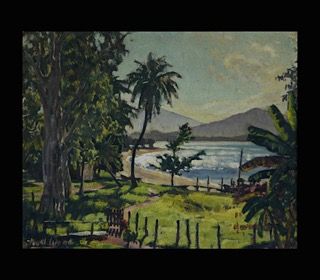 They made a grass shack in which to live before building a home they called the "House of Singing Bamboo" (sadly non-existent after Cyclone Yasi). They had two daughters, Virginia Maray and Ann Oenone. (Wikipedia) 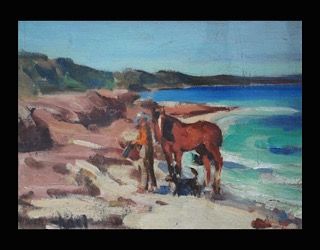 Noel lived on the island for 60 years. After painting just about everything on Bedarra, he became a well-known sight in Tully and on Dunk Island with boards strapped to his back, heading out to paint. At one stage he also taught art classes in Tully, sailing over to Tully Heads in his small craft. He was always interested in permaculture and established productive gardens including every coconut palm and all other fruiting trees to be seen on his part of the island. *Wikipedia)

Sailboat on the Shore, Bedarra Island 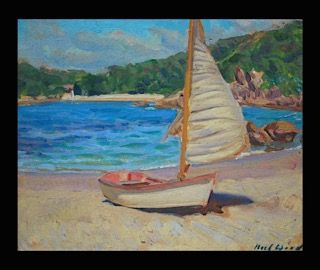 Despite coping with death adders, echidnas and megapodes on land; hungry birds daily sweeping down from the skies; insects munching his tender greens; searching the beaches for materials to use for building his house and introducing goats, hens and guinea fowl - not to mention chatting with his many visitors, particularly the press, he still painted prodigiously every day. (Wikipedia) 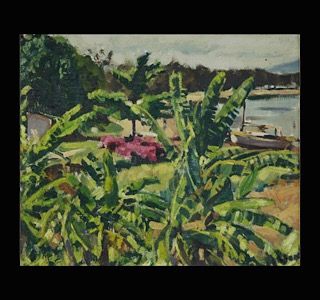 During WW2, Wood packaged fifty of his best paintings to exhibit in London at Leicester Galleries as soon as the War ended. The exhibition was to be opened by the British painter Augustus John. The crate of works was despatched on Queensland Rail but went missing en route and never reached Sydney, where Wood awaited them. It was never found. Bitterly disappointed, Wood took ship to London, anyway, and he painted in England, Ireland, France and Italy, paying his way by producing portraits, until returning to Bedarra to tend to his food gardens, wild hens and fruit trees – and to paint, of course. (Wikipedia) 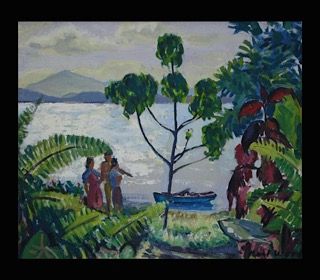 In the 1950s, he was invited to the United States where he worked as an assistant art director in Hollywood and continued with his own painting before, once again, returning to the island. By 1972, Wood had finished painting, preferring to read, garden and converse with his visitors. Eventually, in the 1990s, he left his beloved hideaway for the mainland but, restless and missing the island, he moved four times, always establishing a food garden. (Wikipedia)

Noel Wood died in Tully, North Queensland, in 2001 at the age of 89. His daughter, Ann, makes this comment: “Dad painted every day, mostly on an easel, most often outdoors, and never looked at his palette while he painted – even when he was mixing the paint! He was resourceful, a voracious reader, a great cook, and wasn’t concerned about leading a ‘regular’ life. The island was his paradise, his bolthole, he knew every inch of it and he loved it.” (Wikipedia)

You can read the story about the possibility that some of Noel Wood's painting are fakes at Artworks pulled from auction as late painter's family claims they are fakes.

I will also bring you any further information about the inquiry into the authenticity of the Noel Wood paintings at present undeer scrutiny.

If you are interested in the style of Noel Wood which has a touch of Gauguin about it check out this site which seems to have a lage collection of his works for sale. In the light of the claim that someone might have forged his works I cannot guarantee that all of these works are Wood originals. Nevertheless they offer an interesting selection of images to study. Noel Wood Paintings.

Explaining the story behind Robert Bissell's painting based on View of Scheveningen Sands by C17th Dutch artist Hendrick van Anthonissen.