We've been talking clouds and water with John Pickup - the last of the Brushmen of the Bush. John's mastery of clouds and water and the interrelationships between them is exemplified in the painting above. The drama that John has created is palpable: all of the natural features (clouds, sea, rocky shore) are alive in this clear and present danger to borrow a phrase from the Supreme Court of the USA!

Palette knife or brush strokes create sharp outlines in the clouds, the crests of the waves, the rocks. But alone these lines can't generate the drama taking place: line must be accompanied by colour and in this case vibrant, strong, penetrating colours. And once more the delicate touch of JP suggests the streak of lightning. Note that the lightning doesn't dominate because this painting is about the effect of the lightning on the clouds and sea. It is not about the lightning itself which would be a very different painting.

John Winter Pearson Pickup was born at the beachside suburb of Manly (Sydney), New South Wales and here his love of water began. I used to go swimming regularly and for the first 20 years of my life I was literally a live by the sea person. I even had my own VJ sailing boat and went to school and work every day by Manly Ferry: hence my love of water.

John Pickup tells the story behind the painting Clifftop Remembrance as shown above. It is interesting in that I was capturing a moment when I was on holiday in Tasmania and had turned round a headland and saw the nuns throwing flowers into the water. When I finally did the painting I put it in an exhibition in about the mid 80s. When someone asked what inspired the painting I explained that I had witnessed this scene on my visit to Tasmania- whereupon I had the sudden realisation that my only holiday in Tasmania had been in 1953, some 30 years before! I guess I'm unknowingly storing things away for possible future use!

What I really admire about the way John Pickup paints water is that he gives it such personality: showing all the possible moods. Below is a lone sailor fighting the angry, lethal, watery environment of the ocean. With a limited palette and contrasting vertical and horizontal lines, John has achieved such strong drama I feel as if I'm in the ocean with the sailer.

Chichester was painted in recognition of the circumnavigation of the globe by famous British sailor Sir Francis Chichester, John capturing Chichester rounding the hazardous Cape Horn in 1967. John recalls thinking how it important it was to highlight Chichester's bright yellow life jacket. The similarity between Francis Chichester and John Pickup is not lost on me: both were pilots, both were sailors. Was Chichester an artist? Certainly not of the ilk of John Pickup. But at the end of the World War 11, Chichester purchased 15,000 surplus Air Ministry maps, initially pasting them onto boards and making jigsaw puzzles out of them, and later founded his own successful map-making company. (Wikipedia)

John created this small painting (below) for his daughter (who works in TV and films) to give as a birthday present to a friend who was "the underwater safety officer" on a film. I thought it might be a bit incongruous to give her a fire extinguisher to fight any underwater fires!

We are going to conclude today with All in a Day's Work which is a very significant painting for many reasons. It shows the RACQ-CQ Rescue helicopter saving John Pickup's family who were marooned in their boat. Again the composition is perfect. The stormy unkind sky and the angry, dangerous sea have been painted with vigor and passion. You can see John's palette knife hard at work as it takes on the strength that is present in nature's forces. The vulnerable family in the small boat awaiting rescue are almost drifting out of the painting: away from safety. But high above the helicopter fights the environment and proves an equal adversary as the crew skillfully rescues the family from their plight. If you are a students of art note the way John has painted the clouds and the sea with the amazing dance of colour and line. Note also how the light on the clouds has been cleverley used to highlight the person being rescued.

This painting was reproduced as prints on canvas and greeting cards to raise funds for the RACQ-CQ Rescue service based in Mackay, Queensland. Here is a news report and image of John handing over his painting to RACQ-CQ Rescue. 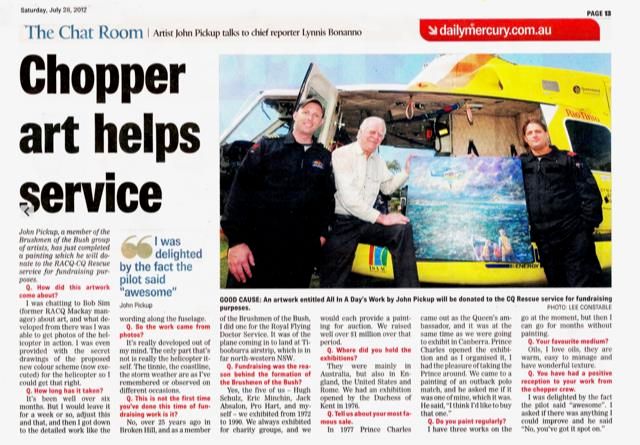 Of great importance is that the painting has turned out to be (for the moment) the last of John Pickup's major works, completed in 2012 when macular degeneration began to make detailed work difficult.

I have many more of John Pickup's paintings which I will be bring to you along the way. John is an incredible Australian: a wonderfully warm and generous man who is only too willing to pass on his knowledge about the world of art.

All in a Day's Work might not be the last major work after all!

Remembrance of rivers & creeks & fascination with the way the ocean moves is a feature of the oeuvre of John Pickup. Darwin-the inspiration to the painting 'Build up to the Wet'. Queensland where water is more than plentiful; where the rivers run deep and strong