The recent blog about the wonderful watercolours of Denise Faulkner featured many well-known types of porcelain and china, such as Royal Albert, Crown Derby, Willow ware and Bunnykins, to name a few.

But there was one style shown in her work that I was keen to learn more about…… do you recognise it in the pictures below?

It is Chinese porcelain originating from the Qing dynasty (17th and 18th century) that is collectively known as Famille Jaune, but is more correctly divided into groups according to the background or predominant colour: Famille verte (green), Famille jaune (yellow), Famille rose (pink), and more rarely, Famille noire (black).

There is a vast variety of colours and styles as this china was extensively produced, particularly for Western collectors. But to understand the reasons for this, it is necessary to know a little bit about one of the emperors of the Qing period, named Kangxi.

Kangxi was born in Beijing, China, on 5th February 1654 and became Emperor at the age of seven, in 1661! But for a number of years, effective control of China was held by four Regents and his grandmother, the Grand Dowager Empress. He took over at the age of 15, and reigned for 61 years till he died in December 1722, making him one of the longest reigning Chinese emperors in its long history.

His rule was a period of expansion, stability, and prosperity for the Chinese Empire, after many years of war previously.

He initiated the period known as the "Prosperous Era of Kangxi and Qianlong" or "High Qing", which lasted for several generations after his death.1 He was very interested in technology, military, art and culture, and employed several Jesuit missionaries who had direct experience of the Western world. They are said to have brought the new techniques to China from Europe and set up workshops close to the emperors own palace.2 He was very open to exploring new cultures and ways of learning, even allowing Catholicism to be tolerated, and building a church for the converts actually in the Forbidden city! 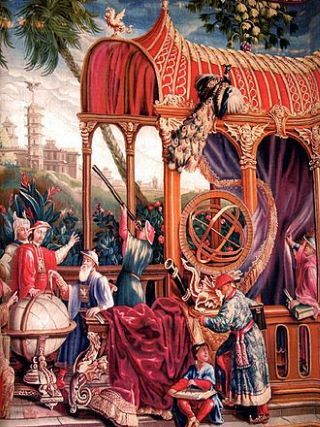 After the imperial porcelain factories at Jingdezhen had been inactive for some sixty years, Kangxi initiated a new era of high-quality production. His predominant aim appears to have been to regain standards of quality that had long been lost, and to employ ancient techniques in a new way. 2

The porcelain style most immediately identifiable as ‘Kangxi’ is the so-called 'famille verte’ colour scheme, in China known as wucai, ‘five colours’. Early on in his reign he engaged a gifted painter, Liu Yuan (c. 1638-c. 1685) who was influential for over ten years. It resulted in a new direction for porcelain decoration. 2

Kangxi porcelains – perhaps not surprising, given the longevity of this period – are vast in range and immense in variation. Remarkable, however, is the fact that export wares were of the same high quality of material, craftsmanship, design, painting quality and aesthetic appeal as those produced for the Imperial court. The Kangxi Emperor managed to raise the capacity and ability of the manufactories to feed the extensive demand in the West. This fits in with a man who was more passionately interested in progress than in extravagancies for his own person.2

Other dominant colour variations emerged after “famille verte”, such as Famille rose, which was perfected in the reign of Kangxi’s son, Yongzheng………

The variations of Famille Jaune were so popular in Europe that even some of the Dutch Delftware is modelled on its design:

A few weeks ago we introduced you to UooUoos - a mythical creature designed for an Art Trail In Melbourne and fund raiser for the Royal Children's Hospital 150th Anniversary.