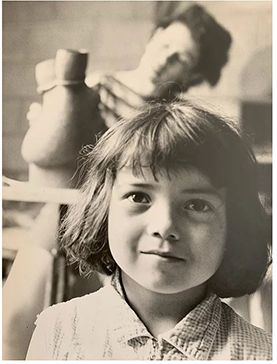 From inside her art studio, located just off the front hallway, came our mother’s melodious reply, delivered in a refined British accent: “Hello, dears! Go fix yourselves a snack. I’ll be out in about an hour.”Anne Wienholt put her artwork on a par with the family life. In fact, that's where she put a lot of her vital energy says her daughter Hanna Takashige.

Born in Leura NSW in 1920 and studying art at the East Sydney Technical College under William Dobell and Frank Medworth, Anne boarded at Merioola, a mansion in Rosemont Avenue, Woollahra run by Chicka Lowe that was home to a number of artists in the 1940s including Mitty Lee Brown, Kate O’Brien and Alec Murray . Mary Edwards lived nearby.

I have learnt by going down these amazing rabbit holes that The Merioola Group (sometimes also called the "Sydney Charm School") was a Sydney-based group of Australian artists active during the 1940s and early 1950s. The group was named after Merioola, a mansion where many of the group lived.

Anne Wienholt wrote and illustrated stories for Home (1942), Australia: National Journal (1940s) and Australia Week-end Book 1 (1942, p.163, illustrating 'Australia from Egypt’ by Marjorie Barnard) and the Sydney Morning Herald (1946). Her weird 'Fable' about a woman’s murdered husband who lived on in the body of her baby fathered by his murderer was published in Home (2 February 1942), while 'The Ticket’ – an illustrated short story with the dramatic opening sentence, 'Mrs. Burnett was lying dead in the bedroom’ – appeared in the Sydney Morning Herald on 28 December 1946.

In 1944 Anne Wienholt had won the NSW Travelling Art Scholarship and, without waiting for the war to end, she and runner-up Mitty Lee Brown sailed for New York.

She was a regular participant at Atelier 17, the print making workshop led by Stanley William Hayter, which was a base for many well known European artists during the WWII era. While studying, she met her husband-to-be Masato Takashige, a merchant seaman, master carpenter, and fellow artist.

In 1953, the couple moved to the Shawangunk Mountains in New York where they built a home and raised three daughters. Anne was a prolific artist, highly skilled in drawing, painting, printmaking, ceramics, and sculpture. Her work has been shown in solo and group exhibitions in Sydney, New York, and San Francisco, and appears in collections at the Brooklyn Museum and the National Gallery of Australia. Anne was technically proficient in each step of her craft: she built frames for paintings, fired clay ceramics, and created bronze sculptures in the lost wax method.

Anne had an adventurous and restless spirit. She travelled widely and trekked the Sierra Mountains, the Andes and, in later years, the Himalayas. Anne was a bird watcher and gardener who could identify many bird, plant and fungus species. Throughout her life, she actively supported wildlife and environmental conservation. Anne is survived by her three daughters and two granddaughters. (Writing credits Marin Independent Journal and Joan Kerr daao.org.au)

Anne Wienholt confessed "For me drawing is the basis, the underpinning, the compost, if you like, for the all the visual arts. Its difficulties lie not in the hand or eye, but with the self-conscious mind. Sadly, by adulthood most of us have censored out nine-tenths of the visual world (Don’t stare child!) and content ourselves by seeing only what we “know” to be there. While in actual fact men and women, flowers, dogs, and hats, look far more curious, strange and wonderful, than we have permitted ourselves to believe. So it is with visual curiosity I would like to approach the world, and have my work in its several forms so approached.

My drawings are in rag paper, often of intermediate tone. A graphite stick or 6B pencil is used, and sometimes touches of pastel pencil are added." (2004 Credit robingibson.net)

We will definitely look at the The Merioola Group and maybe the Atelier 17 artists in more detail in the future. In the meantime if you would like further insight here is a link to Hanna Takashige, Anne's daughters post below.
https://www.eatdarlingeat.net/single-post/Go-Fix-Yourselves-A-Snack

Learning about the unlimited possibilities of fluid art using Marabu’s new Alcohol Inks and Aqua Inks on Ampersand Claybord through "The Artistsnetwork".