About a week ago I told you that I've been commisssioned to paint a Macedonian Shepherd and that I would take you on this journey with me as I create the image.

Check out the introductory blog on this painting task so that you know what challenges I have ahead.

After some research on shepherds and sheep, and of course North Macedonia, I sat down with my subject "John" to have a little chat.

The aim was to get a better idea about what he had in his mind and why had he asked me to paint him as a shepherd.

In my mind the painting was about John and therefore he needed to be the central subject in the painting with the scenery almost irrelevant though having travelled through this area I knew to include lots of towering mountains.

When I first started thinking about the painting I had chosen a small canvas but changed my mind as I got quite excited about painting a shepherd with his sheep. I like painting sheep as shown below in a couple of my Australian "Sheep" paintings.

And so I moved onto a larger canvas that is 91cm x 76cm. I practised sketching in John, the shepherd sitting on a rock. 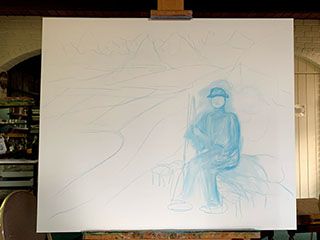 My plan was to have John surrounded by large wooly sheep! A little like the painting Gillie with His Sheep (below) by C19th British painter James Charles Morris. 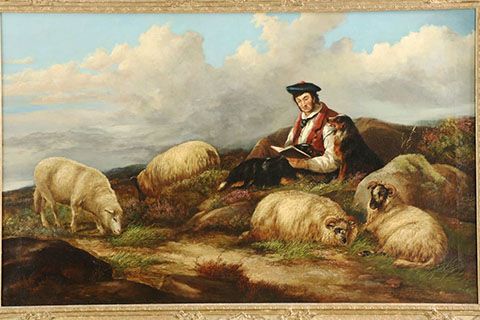 After chatting a little about sheep and how his family had a flock of sheep when John was young back in North Macedonia, I suggested we look for images of his village on the internet.

To both of our delight we found a photo of his family home. And his story and consequently his painting took a new turn. 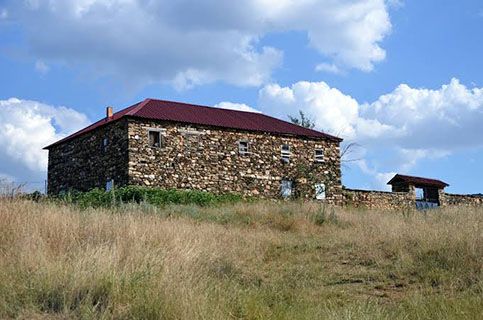 John explained to me that although his parents had made their new home and life in Australia, his father could not stand by and see their original family home become a ruin. Even though the home is now uninhabited John's father paid to have a colorbond roof installed to help preserve this lovely stone building. And who knows - one day someone might return to live in it.

Could I paint his home into the picture? Of course.

Here are two of my scribbled images trying to get a feel for where to put the house in a painting where the composition was rapidly changing.

John went on with his recollections which included running down the hill across the road to the "corner store" which was, as we all know, central to life in our childhood years. Here on the blog we are so interested in Corner Stores that we have dedicated two blogs to them which you can check out below.

The Corner Store: A Dying Icon

Relaxing with Me Kyeoung Lee: The Corner Store.

John and I did find a photo on-line of the corner store in John's village. It is the building behind the stone tower. 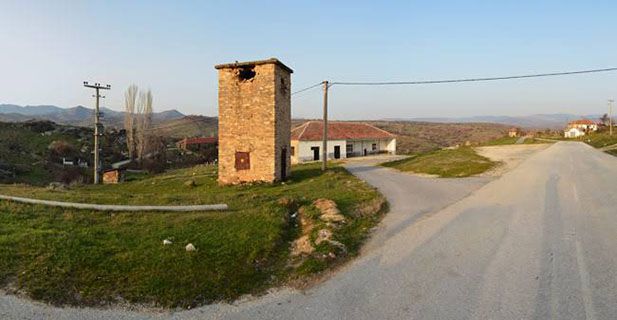 To sum up - the painting now must include:

John as a shepherd
Sheep
His family home
The corner store

He also wanted a shepherd's hut which I must not forget.

But I keep thinking Mountains because that's my strongest memory of travelling these roads probably because the tour bus had the brake compressor tied on by a man's belt as it had come adrift along the rough road. As we went up and down over Macedonia I thought my last view on Earth was going to be a close up of a Macedonian mountain!

John's village sits snug in high rounded hills. The towering craggy mountains are there but distant and so had little bearing on his childhood life.

Nevertheless I will show you some of my photos taken over 40 years ago through some of the most spectacular scenery I have ever experienced.

As John and I finished up our "little chat" his parting words were:

"Of course I have to have my dog in the painting."

I didn't even ask what kind of dog he had as a child. Somehow I just knew it would be a Maremma sheepdog!

And I was right - a black Maremma so I'm off to do some more research.

Christy Kuesel from Artsy considers the artists who will be trailblazers in 2020 through exhibitions inclduing works by Artemisia Gentileschi, Donald Judd, Zanele Muholi.