As Anne has mentioned Australia is no stranger to devasting bush fires, in widespread areas, as we have seen and heard recently .

Pine is renowned to burn easily and quickly and a decision was made to establish the National Arboretum instead, close to the city, and later that year, the State Government dedicated 250 hectares (618 acres) of land to the west of the city.

From our recent visit to Canberra, Anne posted some photos, a few days ago, but let’s explore some more about the National Arboretum.

Firstly, what is an arboretum?

The National Arboretum features 94 forests of rare, endangered and symbolic trees from around Australia and the world. Many of the trees are still young but two of the forests are over 100 hundred years old – the Himalayan cedar forest (Cedrus deodara), planted 1917 – 1930, as below (we were lucky enough to spot rosellas).

Over 44,000 trees from over 100 countries are growing across this huge site, making it one of the world's largest living collections of rare, endangered and significant trees.

The trees planted at the National Arboretum have been carefully selected by an expert panel for their conservation status, symbolic nature, aesthetic value and suitability for the site and climate.

From that long list, only trees that could manage Canberra’s variable climate were chosen. The forests also act as botanical arks and seed banks for the future.

Part of the intent was to symbolise the local Canberra community's process of healing and recovery from the upheaval and grief of the catastrophic fires. Without those fires though the Arboteum would not exist.

...picnic areas and children's playground - I love the gumnut shaped cubbies. You know we are definitely in Australia!

...extensive walking and hiking tracks, as well as outdoor sculptures.

My favourite sculpture is Wide Brown Land, from the famous poem My Country, written by poet Dorothea Mackellar when she was 22 years old, living in England and terribly homesick for Australia.

First published in London in 1908, My Country quickly became one of Australia's most loved poems, a status it still holds more than a century later.

The sculpture's form and style were inspired by Mackellar's handwriting. Its 35 metres long and 3 metres high, made from corten steel and steel rod by Marcus Tatton, Futago Design Studios and Chris Viney in 2010.

The first verse of the poem refers to England, however many Australians are only familiar with the second verse, which refers to Australia and includes the well known phrase The wide brown land for me!

The love of field and coppice,
Of green and shaded lanes.
Of ordered woods and gardens
Is running in your veins,
Strong love of grey-blue distance
Brown streams and soft dim skies
I know but cannot share it,
My love is otherwise.

I love a sunburnt country,
A land of sweeping plains,
Of ragged mountain ranges,
Of droughts and flooding rains.
I love her far horizons,
I love her jewel-sea,
Her beauty and her terror -
The wide brown land for me!

Other sculptures include Backwards Attitude 2014 by Louis Pratt (Cold cast aluminium, steel and fibreglass, 180cm H x 102cm W x 287cm D. 2 x life size), which acknowledges a post-digital and enlightenment age where information is everywhere and the correct course of action is clear, but an attitude of rejection thwarts it. 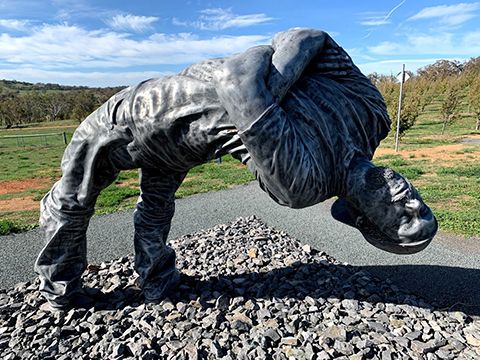 And Nest III by Richard Moffatt in 2007.

A striking metal sculpture of an Australian wedge tail eagle on its nest, Nest III is made from welded steel found-objects, mostly abandoned farm machinery. The sculpture sits at the top of Dairy Farmers Hill. 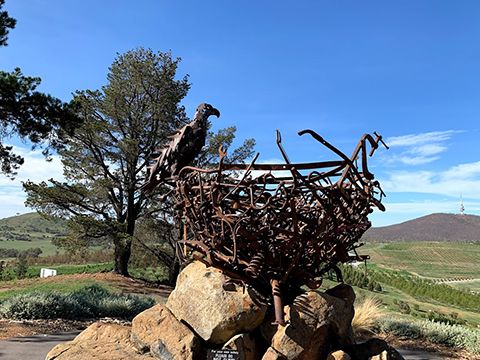 This short Youtube clip takes you on a short journey through the Arboretum.

Photos are my own unless stated.
Details taken from nationalarboretum.act.gov.au and the short informative talk given by one of the friendly volunteers.

Caroline helps us celebrate International Women's Day - 8 March 2020 - by introducing us to the #knowmyname initiave by the National Gallery of Australia. Showcasing one female Australian artist per decade.