In yesterday's post we learnt a little bit about Fractals, and how they occur in nature. Today we return to look further into the man-made visual representations of mathematical equations, starting with the Mandelbrot set, and moving into extensions of this, in Fractal Art.

Benoit Mandelbrot was a pioneer of fractal geometry. Using the newly developed IBM computers at his disposal in the 1960s and 70s, Mandelbrot was able to create fractal images using graphics computer code. Mandelbrot, however, never felt he was inventing a new idea. He describes his feelings in a documentary with science writer Arthur C. Clarke1:

"Exploring this set I certainly never had the feeling of invention. .... They were there, even though nobody had seen them before. It's marvellous, a very simple formula explains all these very complicated things. So the goal of science is starting with a mess, and explaining it with a simple formula, a kind of dream of science".1

One particular set of complex numbers was introduced by him in 1979, and was later named The Mandelbrot Set in tribute to this mathematical genius and visionary. The Mandelbrot Set is an Abstract Fractal which can be generated by a computer calculating a simple equation over and over. And this allows us to see mathematics visualised in a most glorious and remarkable way.

It's a swirling, feathery, seemingly organic landscape that is reminiscent of the natural world, but is nonetheless completely virtual. Aren’t they fabulous!

One would expect that the construction of such complex shapes would require complex rules, but in reality, the algorithms (equations) that generate fractals are typically extraordinarily simple. Their visual results, however, show great richness. The seeming paradox is easily demystified: these algorithms involve "loops." 2

You can see this by seeing the effect of zooming on the fractal below: 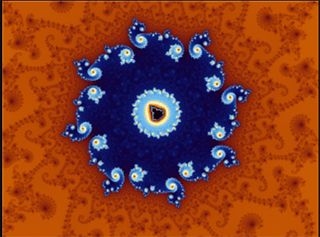 The fractal mathematics Mandelbrot pioneered, together with the related field of chaos theory, lifts the veil on the hidden beauty of the world. It inspired scientists in many disciplines - including cosmology, medicine, engineering and genetics - and artists and musicians, too. As such, it reminds us that the world is complex - and delightfully unpredictable.

Fractal Art, also called Mandelbrot Art, developed from the mid 1980s, when personal computers became powerful enough to plot and display the Mandelbrot set in high resolution. It is created using fractal generating software and then representing the results as still images, animations, and media. It is a genre of computer art and digital art which is part of new media art. There are different types of fractal images which we won't go into. It is rarely drawn or painted by hand.

Let's take a quick look at the work of some fractal artists.

William Latham a British artist , has used fractal geometry and other computer graphics techniques in his works. He has researched the potential for computer algorithms to “generate organic imagery and evolve that imagery with the guidance of the viewer”.

Don't you just love how the chaos of the art world inspires people across the world! There are too many artists to cover here, but if you're interested in this type of art here are some names of some other inspiring artists who have pushed the boundaries even further:

You may be interested to know that there is an organisation called The Fractal Foundation in Albuqurque, USA, that is devoted to the promotion of fractals in their many forms. Their objective is to use the beauty of fractals to inspire interest in science, math and art. Their website contains more fascinating information and images: click here. Showcasing patterns of nature where the small components are the same as the whole image. Introducing the mathematician Benoit Mandelbrot who saw the chaos and irregularity of the world as something to be celebrated. Image: Unsplash