How often have you admired a landscape?

Throughout our lives, throughout our travels, we have all stood and admired the magnificent view - be it in situ, from a fabulous photograph or a glorious painting.

Landscapes appeal in multiple ways: the colours, the composition of the natural features, the texture. There are many layers to a landscape in which you can appreciate the scene.

But seldom do we stop to understand and appreciate the deepest layer on which a landscape has been built: the narrative of this slice of Earth.

Landscapes tell stories and the visual representations often don't convey the narratives that literally lie beneath the soil and vegetation and yes, even the buildings, if we are talking about urban landscapes.

With this in mind, South Australian naive artist John Wylie and I have combined to bring you the narrative of The Battle of Broken Hill which is found in the history pages and illustrated below in his triptych painting titled Picnic Train in the Desert. The vista of the painting is looking South/West towards The Pinnacles which are composed of a banded iron formation, or more technically, quartz-magnetite lenses in plagioclase-quartz rock.1 Also featured is the Pinnacles Mine and the edge of Broken Hill in the foreground. But it is the train that carries the narrative.

When you look at this painting by John Wylie you are impacted by the expanse of the desert, the brilliance of the red/orange earth which surrounds the mining town of Broken Hill, found in far western New South Wales. Ignore the man made features and you could be on another planet but the story is all too familiar and close to home here on planet Earth.

John has chosen to divide the painting into three panels: each representing an element of the deep and complicated narrative that is Broken Hill.

Picnic Train in the Desert: Panel One

In the first panel the narrative is about the mining industry that created Broken Hill where the buildings and structures that symbolise the mines rise out of the ground. 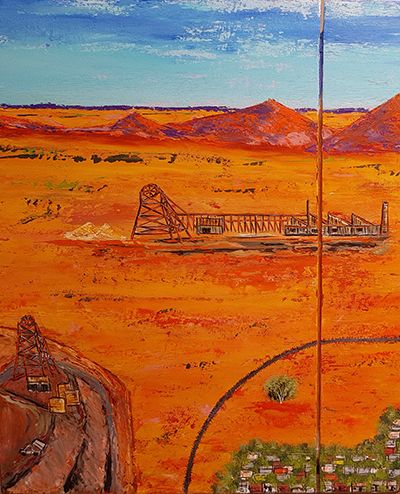 Picnic Train in the Desert (Panel One) by John Wylie ©①

John has made the structures of mining blend into the landscape because they have, in the main, been constructed from local materials and, importantly, the life blood of the town has come from the mines.

In the lower right corner of Panel One (above) you can see the curved line of a rail line sneaking its way into the desert, past the green and comforting zone of the edge of the town: the tips of the homes barely show in this panel.

The second panel of the painting, in spite of being dominated by the desert, is about community.

In the foreground is the township of Broken Hill - the green signifying growth, wealth, life, community.

And beyond the town is a string of train carriages rumbling along on a straight track.

But what or who is in the open carriages? 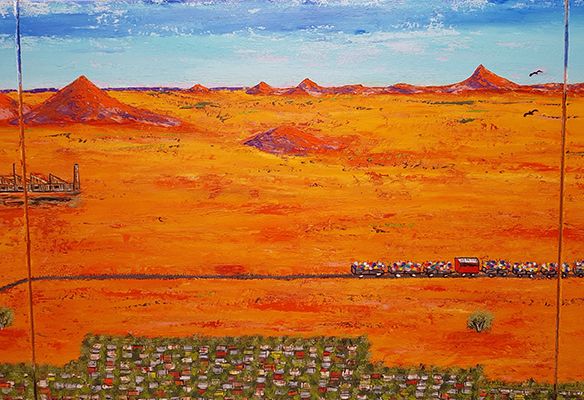 On closer inspection you will see that the train carriages are carrying people: families of the miners. Back around the early years of the C20th, each New Year's Day, the local Lodge of the Manchester Unity Order of Oddfellows held a picnic at Silverton, about 25 kms from Broken Hill. On 1 January 1915, the train from Broken Hill to Silverton was crowded with 1200 picnickers on 40 open ore trucks.2

The third panel (below) is where we enter the ambiguous landscape. In John's naive style painting the engine is chuffing ahead towards Silverton. The edge of the town of Broken Hill can been seen on the lower left edge of the painting. But scanning across the foreground you can just make out the shapes of two figures crouched above the train line.The figures are holding loaded rifiles. 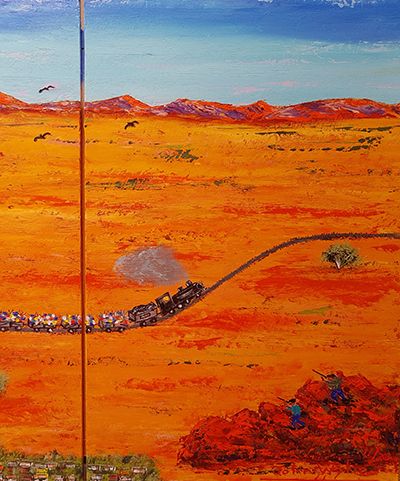 I am going to let John Wylie take over the narrative as he created this painting to highlight the discrimination & racism that was present at the time in Broken Hill.

This painting was inspired by Australia’s most remote outback city –
Broken Hill in western NSW and the catastrophic "Picnic Train Attack" on the 1st January 1915 at the time of the WWI conflict in Europe.

Captain Charles Sturt travelled through the region with his expedition in 1845 and first referred to the area as “broken hill”. For thousands of years the Wiljakali indigenous people occupied this region of the country.

The town of Broken Hill grew quickly, mining companies were established and by 1914 the population doubled to 35,000 people, putting it on the map, at this time, as the third largest city in New South Wales.

People, especially men, flocked to the city seeking to make their fortune by working in the mines. Broken Hill rapidly became one of Australia’s most multicultural cities of the time.

With the rapid expansion of the city and the mines, trade unions formed around the mining industries and Broken Hill unionists won a 35 hour week for the miners. Originally, the higher wage earning men formed societies, attending meetings in their finery, and the lower wage earners were not invited to partake. It appears this created great division within the township and the various cultures, including the Turkish & German communities. Also, the Muslim families and Afghan cameleers were segregated to Ghan Town in outer North Broken Hill. These people were faced with ongoing racism, abuse and suffering.

Due to the feeling of helplessness, racism, community isolation, severe hardship, discrimination and the division within the community, two men retaliated by planning an attack on the affluent travelers on the picnic train to Silverton on 1st January 1915.

They transported their weapons in an Ice Cream trailer to the planned attack site approximately 1.2kms from the Railway Town Station on a curve in the railway track to Silverton. From their position in a trench they open fired on the approaching Picnic Train which had forty one open ore carriages in tow transporting 1200 men, women & children.

The fatality unfolded: four people were killed and seven wounded on the train. The two gunmen eventually were shot and killed at nearby White Rocks Reserve adjacent to the railway line by local police and military officers.

The print media at the time headlined the story War in Broken Hill - Attack on a Picnic Train! The catastrophic incident became known as The Battle of Broken Hill.

As the decades passed, it appears, initially, there were many bridges to rebuild the fractured society within the mining town communities. Tragically, relationships got far worse between the cultures of Broken Hill and also Australia wide. Many complicated factors associated with the two World Wars stifled the progress of repairing and rebuilding our country's unique cultural interconnections.

Internationally, after the World Wars, the unions of Broken Hill were at the time very proactive, innovative & instrumental in supporting their mining industry members, with major reforms in Occupational Health Safety and Welfare, Equal Opportunity matters, Award Wages, and Sick Leave Entitlements. This all contributed to improving the workers' respect for each other and minimized the class discrimination of the early years.

Today, the City of Broken Hill is the gateway to the outback and a vibrant centre for tourism, the arts and multicultural events.

Australia’s unique rural city has evolved from humble beginnings and adversity, to achieve greatness. This would not have been possible without the multicultural communities’ magnificent efforts in standing up for their rights, seeking respect and equality from the community, although under the tragic circumstances of the "Picnic Train" incident.

From John and Anne

The Picnic in the Desert painting epitomizes the struggle of Australia's mining industry pioneers and highlights the tragic, unproductive outcomes of racism, discrimination and abuse within the mining industry environment and local community of the time for our early settlers and pioneers.

Hopefully this painting and the narrative beneath the ambiguous landscape generates some discussion about the topic and learning about the serious consequences of racism and discrimination.

COPYRIGHT
① The images from the painting The Railway Town are reproduced here with the permission of the artist John Wylie.

Today we look at the beautiful insect photography of Dr. Luis Matar, Doctor of Ecology, from the Centre of Urban Research at RMIT, Melbourne. Image courtesy of Unsplash