Over the past few weeks we have showcased the paintings of Hugh Schulz (1920-2005) - Australian miner turned naive artist. Today we are going to explore a little about how he created his enchanting outback scenes.

Hugh didn't tend to date his paintings but we do have images of a couple of his works which would appear to have been created early in his quest to visually record his view of the Australian outback landscape. These paintings help us to understand the development of his style.

The painting below was painted in the early 1970s and was a gift from Hugh Schulz to the parents of the wife of one of our subscribers.1 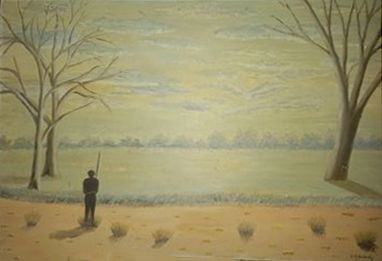 The painting depicts an aborigine watching the moon over a lake. On the back, still visible, written in chalk is the title "Moonlight Lake" Unlike his later works, it doesn't have quite the attention to floral detail and the soil (and lake surface) is cream - more like the soils around Menindee.

Whilst the detailed patterns and highly contrasting colours that Hugh Schulz became known for are absent, there are signs of his later style. The line of trees and bushes divide the composition into "areas" which we see in the patterns in the "mature" Schulz paintings. And faint patterns can be discerned in the way he has painted the clouds. Also the trees without leaves which appear in several of Hugh's later paintings are present here.

The painting below is from the collection of Hugh's daughter Sandra Lindeman. From the style it is possibly an early Hugh Schulz painting but it still contains the main features that characterise most of his works. There are distinct patterns in the composition- in the tree trunks, the tree foliage and in the subtle yet obvious repetitive lines in the sandy soil. And high in the sky on the right is a crackle of cockatoos- a motif which appears in many of his paintings. 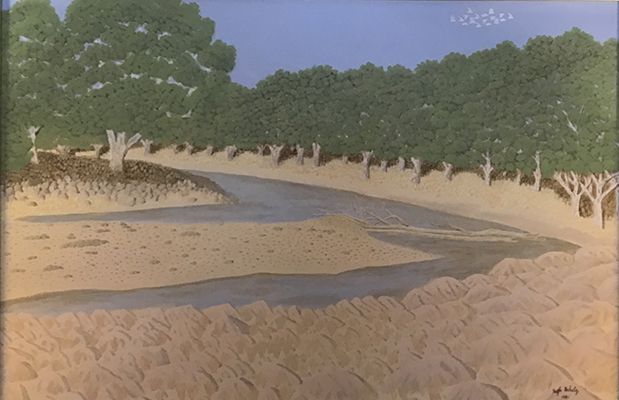 Most of Hugh Schulz paintings are ablaze with vibrant colours and distinct repetitive shapes and patterns which pervade every corner of the image: they percolate and penetrate your perception of the outback scene.

And if you look carefully you will see that Hugh has arranged his patterns into distinct areas: shapes within shapes.

Old Grazing Property Out West (below) is an excellent example to illustrate how the patterns of vegetation are constructed in groups to form the composition.

The texture created within the pattern is almost three dimensional as if woven onto the canvas.

Note again, the crackle of cockatoos flying across the sky as in the painting above. 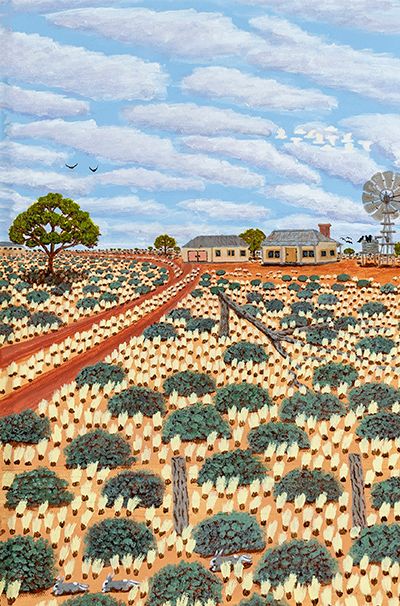 For Hugh Schulz, his view of the Australian outback, paticularly around Broken Hill, was concentrated in the vegetation, flowers, birds, animals and rock formations - down to the tiniest of details. Details that took hundreds of hours to execute for each painting.

Journalist Sasha Grishin described the technique used by Hugh Schulz as not so much a representation of reality as a reconstruction or reassembly of nature. Grishin goes on to say: In a manner similar to the early Flemish masters, Schulz builds up his paintings by assembling a collection of individual elements minutely observed and faithfully recorded. 4 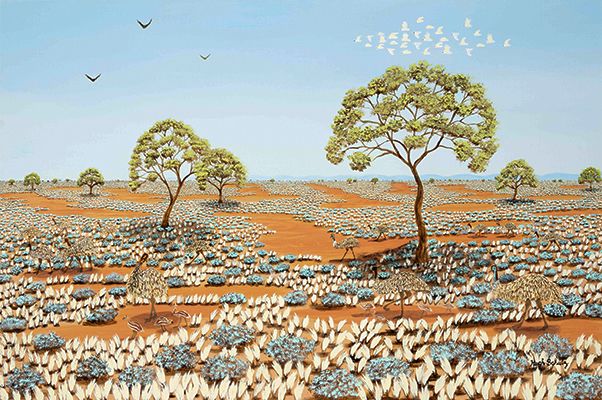 Embedded in these details is Hugh's whimsical technique of camouflaging wild life.

Look back at Emus on the Plains (above) - carefully - and you will see in amongst the blue and white vegetation several emus and their chicks. And note - the cockatoo motif appears again in the top right hand corner of the image.

And below see how the details of the vegetation pattern dominates a large portion of the image, broken only by the line of vibrant green trees and the distant hills - the texture of the stubble enfolding the camels back into the earth. 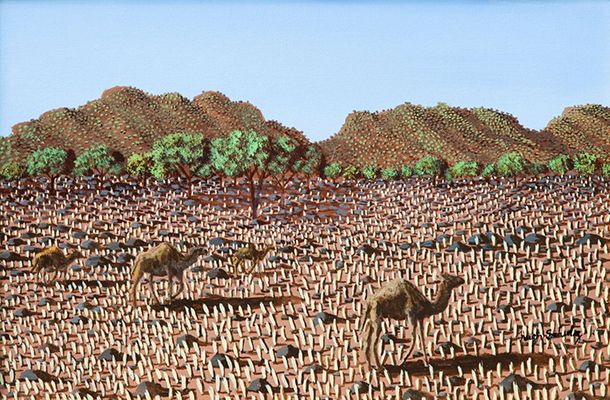 What I find most amazing about the paintings is that none of them are the same. The minute details that form into the intricate tapesty of vegetation, that form the topographical features of the landscape, vary greatly from painting to painting.

The view portrayed below in Quartize Hills is vastly different to any other painting except for the inclusion of the motif of the dead tree. The patterns are there, the vibrant colours are there, but this is different country to the land on which the camels above are roaming.

All are authetic views of the outback; the integrity of the Australian desert has been maintained even though there is a magical and imaginative quality to the paintings.

If you visit this environment and study it carefully you will discover a land of changing atmosphere and moods, diverse aspects, multiple intricate terrains that Hugh Schulz lived in and loved and recreated in his own inimitable style for you and me. 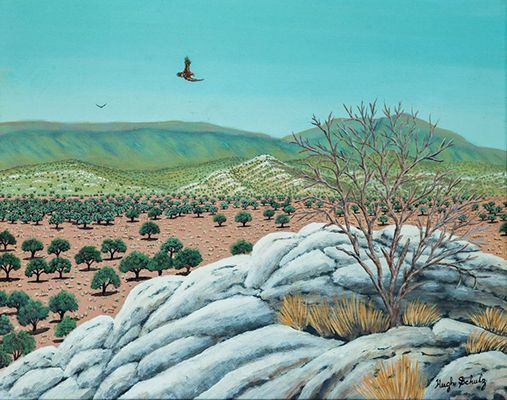 The painting above also illustrates, as Grishin observed, that Schulz's sense of perspective rests almost entirely on a diminution in scale, rather than through colour transformation or loss of clarity...a Schulz tree in the far distance is very similar to the one in the foreground - the almost miniaturist brushstrokes are present in both. Each part of nature is individually analysed, a schematic treatment is then worked out and then the whole is reassembled.4

Not all of the paintings by Hugh Schulz use intense colours - in some the detailed patterns have been fashioned in far more subtle colours.

Look at the two images below and note the similarities: in the composition, in the swirling clouds that help create the mood of grandeur. In both paintings the sky is dominant along with the shapes of the hills - the pattern of vegetation enhances but does not dominate.

Look at the subtle colours in the painting below and the unusual pattern of clouds is also worth noting. 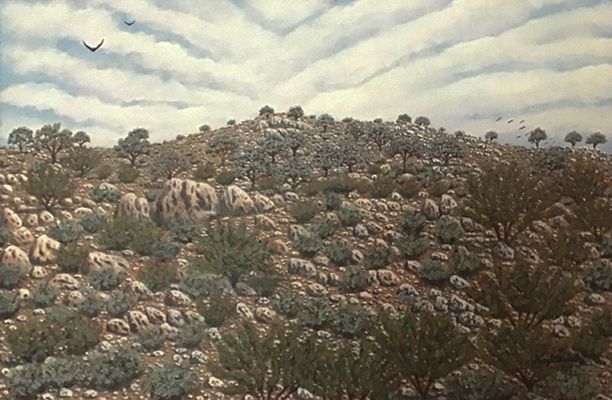 To give you some idea of the amount of detailed brush work that went into each of the Schulz paintings I have magnified a section from the bottom right hand side of the painting. Every rock, every pebble painted in the minutest of details. 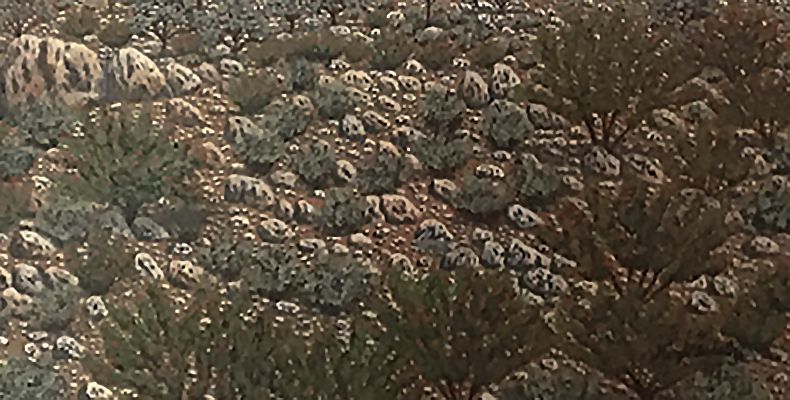 Thank you to Andrew from the Hunter Region for sharing his collection of Hugh Schulz paintings and for the enormous amount of work contributed to producing these posts for the AnArt4Life blog.

Thank you to John Pickup for providing the early prints of Hugh Schulz works and for his recollections of his friend and fellow Brushman of the Bush.4

The art of the California Gold Rush (1848-55) was inspirational as showcased today through the works of German born C.C.H. Nahl, F.A. Wenderoth & H.W.A. Nahl who together recorded this remarkable history of exploration and devlopment. Image credit: en.wikipedia.org