John Wylie is one of our loyal subscribers. John, who is from Port Elliot in South Australia, is also a painter. Recently he sent me an image of his latest work which highlights and embraces some of the significant elements of the mining town Broken Hill, situated in the far west of New South Wales. I love this latest painting by John and he generously agreed that it could be shared with the AnArt4Life community.

Here is an aerial shot of Broken Hill, commonly called The Silver City, taken using the Google Earth App and, as you can see, the town is totally enclosed by desert. Broken Hill was founded in 1883 by boundary rider Charles Rasp, who patrolled the Mount Gipps fences. Rasp discovered what he thought was tin, but the samples proved to be silver and lead. The orebody they came from proved to be the largest and richest of its kind in the world.1

And now to John Wylie's latest painting: Gems of the Desert.

Title: “Gems in the Desert”

Medium: Oil on Timber Board

Frame: Recycled - 100yo Baltic Pine Floor Boards…. (to enhance a rugged look… & I added a gold line for a “classic” appearance)

Now we are going to examine the details close up so we can learn more about John's concept of Broken Hill and his painting technique.

In John's words, he wanted to create a painting of Broken Hill because it is so historic and unique.

We are going to examine the significant elements John has included in the painting and at the same time take note of his composition, palette and brush strokes.

Commanding a prominent position in the painting and representing over 800 miners who died doing their job is the Miners Memorial (above), which sits atop the mullock heap that towers over Broken Hill. The memorial represents the underground lives of the miners and inside it evokes the damp, claustrophobic underground environment. 2

The colour reflects the deep redbrown of the desert which John has emphasised with his strong palette. Notice also these redbrowns being picked up across the more muted brown of the mullock and then streaking across the lower reaches of the brilliant cobalt blue of the enormous Australian sky. Notice also how the brush strokes create a texture in the iron of the memorial, the dirt of the mullock heap and also across the sky where it meets the earth which, in reality, is never one flat colour but a myriad of tones. Mining is not a peaceful life and John's rugged strokes bring this to the fore.

On either side of the Memorial is the South Mine and the Junction Mine.

I do admire the way John Wylie creates his buildings. Naive artists have a keen eye for detail but John doesn't let this take over from the overall impact of the structure: just enough detail to make it interesting.

I wanted to show you close up images because rarely do we see the details of a painting. Now you can see the placement of the strokes and colours that combine to create the overall impact of a painting. In the close up on the left above, I feel I could reach out and touch the dirt rising above the tops of the straggly, yet determined, gum trees.

The tiny patches of colour which combine at a distance to resemble rooftops: and note the occasional touch of the grey greens of the gums against the red desert earth, making a patchwork quilt symbolising the life of the town, protected by the industry of mining which rises above this fragile yet resilient community.

With the eye and mind of a naive artist but also someone who knows the Australian outback - John Wylie has given the sky and the heavens over to the Royal Flying Doctor Service without which these communities do not survive. But there is another link to the RFDS in Broken Hill and it is associated with Broken Hill's most famous artists which we will come to in a moment.

John's placement of the plane is not accidental. This is a thinking artist who has placed all the significant elements representing Broken Hill life exactly where he wants so that the composition works but also so does the narrative.

The RFDS plane appears immediately over one of the mines as a strong reminder that it is the miners who are most likely to require the phenomenal life-saving medical assistance from our beloved flying angels.

The outback also has amazing bird life and John Wylie nearly always includes an example as a significant motif. The whimisical touch John gives to his birds is delightful and when I see one of his paintings, one of my first reactions is to see where, and how, he has placed his signature creatures.

These close up images also give you the opportunity to examine John's variety of colour tones and brush strokes, rapidly applied in the glorious medium of oil paint.

Regular subscribers to the AnArt4Life blog will have seen the many posts we have written on the great Australian artist John Pickup, OAM.

John Pickup belonged to the historic Brushmen of the Bush, a painting group of five artists who collaborated in Broken Hill, New South Wales in the 1970s and 1980s. The five members of the group were Pro Hart, Eric Minchin, Jack Absalom, Hugh Schulz and John Pickup.

In the lower left corner of John Wylie's painting Gems of the Desert he has remembered, and given respect to, these remarkable artists, where we see them sitting in the dust around a campfire: sketching, painting and no doubt having a yarn about the beauty of the outback. Note the shade of the gum tree close by to protect them from the unforgiving sun. Of significance is the fact that The Brushmen of the Bush donated over a million dollars to various charities especially the Royal Flying Doctor Service.

If you are visiting Broken Hill you can dine on top of the mullock heap at the The Line of Lode Restaurant. Whilst it is not considered by John Wylie to be a significant gem, the restaurant has been included in the painting peeping out from behind the mullock heap.

And close up you can see the amazing patchwork of colours John used to create the mullock heap, the desert and sky beyond.

Please note that John made the frame for the painting from recycled 100 year old Baltic Pine Floor Board so as to enhance a rugged look - adding a gold line for a classic appearance. Making your own frame for your painting adds a touch of class.

Thank you John for sharing your celebration of the Gems of the Desert with us.

If you missed our earlier post on John Wylie and the paintings he creates in his shed please follow the bookmark link below. 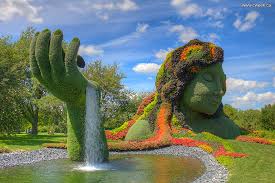 Sculptures are not hard to find in most of our worlds but "green sculptures"? We have to go to Canada to locate our feature art work which is accompanied by many other green sculptures located in the Jacques-Cartier Park, Gatineau, Quebec, Canada. Image: Mother Nature (cweek.ca)