We saw yesterday in Julie's post A snapshot of the history of Japanese art - Part 2 how much Monet was influenced by Japanese art as seen by the number of ukiyo-e prints in his house at Giverny, France.

This painting is very significant and not because it is a delightful painting of a beautiful young woman who would have been 29 at the time, nor because Monet painted this image the year Camille was diagnosed with tuberculosis and was to die three years later.

This painting represents Monet's interest in the meeting of Eastern culture, specifically Japanese, with Western culture. We will go on in future posts to examine how the arrival of Japanese art in Europe contributed to a change in Monet's style, but today we will just enjoy Camille in her kimono.

The painting is a snapshot of the culture at the time: France was experiencing a fad for the trappings of Japanese culture, and Monet responded by painting his wife Camille in full Japanese costume.

As an impish punchline, Monet painted Camille wearing a blonde wig, so as to underline the fact that she is a European with no ties to Japanese culture at all!

Behind the satirical undercurrents, Madame Monet in a Japanese Kimono stands as an exceptional piece of Monet's art in its own right. It is a perfect example of how he was able to balance complexity with looseness.

Camille's kimono is depicted in tremendous detail, with an intricate pattern of Japanese artwork immediately jumping out at the viewer.

But once the viewer's eye falls upon the face, the painting takes on a different light. Camille's visage is rendered in loose, simple terms, an impression of a beautiful woman rather than a detailed recreation.

The overall effect is complemented by the background. Camille stands in a room with a plain wall and a carpet showing a simple, repetitive pattern, quite unlike the intricate design that adorns her kimono. But she is also surrounded by Japanese paper fans, each one bearing a design of its own.

Some hang from the wall, others lie on the floor; the general impression is that they are floating around her, symbols of France's contemporary fascination with all things Japanese. Camille is not merely dressed in Japanese costume - she is surrounded by the very spirit of Japan.

A print of Madame Monet in a Japanese Kimono would make a truly beautiful image for an art lover to hang in their home. It represents the craft of Monet at his finest; but it is also one of his lesser-known paintings, an interesting sideline in his development of an artist.

Those who are aware of the cultural background to the painting will appreciate the irony; everyone else will be able to appreciate the sheer beauty of French Impressionism's loving tribute to the art of Japan.

No overview of the French impressionist movement can go without giving due mention of Claude Monet. It is impossible to overstate just how much influence Monet had on the movement as a whole: after all, he is regarded as one of the founders of French Impressionism, and his distinctive technique helped to characterise the approach of the movement.

Claude Monet focused on mixing areas of great detail with areas of looseness in order to capture an individual impression of a given scene or moment; and throughout his career as a painter he varied this combination, emphasising detail in some paintings and loose impressions in others.1 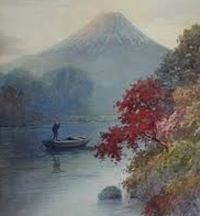 Today we take a closer look at the factors that have influenced Japanese art since the Edo Period, right up to the current day. Image: By Yoshida Hiroshi, Credit Wikipedia.