I am sure we have all heard of the Mount Rushmore carvings of the heads of four Presidents of America: George Washington, Thomas Jefferson, Theodore Roosevelt and Abraham Lincoln. 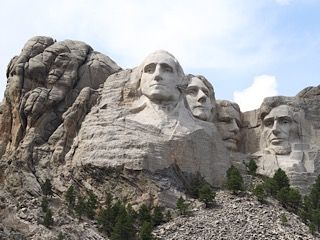 Subscribers J&P from Coogee have alerted me to the fact that there is another sculpture being created in The Black Hills of South Dakota - a sculpture of a significant person but not an American President. The Black Hills of South Dakota are an amazing feature of granite rock so it is little wonder that they were chosen as the site for the carvings of significant people in American history. 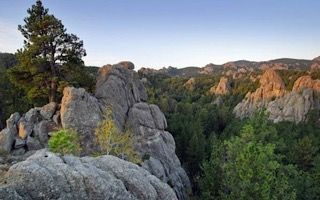 The Presidential Carvings on Mount Rushmore were created by Danish-American artist Gutzon Borglum. What is not so widely known is that at first Borglum was going to carve western American heroes such as Lewis & Clark, Sacagawea, and Buffalo Bill Cody but decided the presidents would attract more attention especially from the tourist trade. The Mount Rushmore carvings took 14 years to complete and were opened in 1941.

Working alongside Borglum on The Presidents was a Polish-American sculptor Korczak Ziolkowski who was no doubt thinking about the potential the granite rocks offered for more sculptures. And as fate would have it Ziolkowski got the chance to create the another granite carving in The Black Hills, a statue of the memorable Native American Tȟašúŋke Witkó known as Crazy Horse. Ziolkowski began the massive carving in 1948 and to this day it is still being created. It is a fascinating story so let's begin.

Crazy Horse ( Tȟašúŋke Witkó in Standard Lakota Orthography; lit. 'His-Horse-Is-Crazy') born about 1840 and died September 5, 1877 was a Lakota war leader of the Oglala band in the 19th century. He took up arms against the United States federal government to fight against encroachment by white American settlers on Native American territory and to preserve the traditional way of life of the Lakota people. His participation in several famous battles of the Black Hills War on the northern Great Plains, among them the Fetterman Fight in 1866 in which he acted as a decoy and the Battle of the Little Bighorn in 1876 in which he led a war party to victory, earned him great respect from both his enemies and his own people. (Wikipedia) Here is a wonderful painting of Crazy Horse painted by Matt Atkinson. 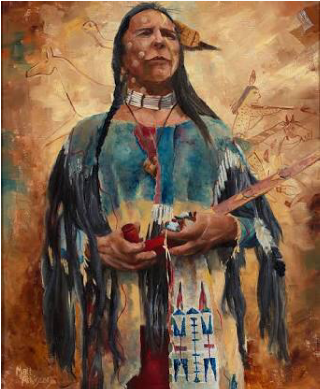 Crazy Horse surrendered to U.S. troops under General Crook in May 1877 and was fatally wounded by a military guard, allegedly while resisting imprisonment at Camp Robinson in present-day Nebraska. His unfailing devotion to protecting his people will be remembered forever: through the Crazy Horse Memorial he will look over his sacred lands and people forever.

Ziółkowski was inspired to create the Crazy Horse Memorial after receiving a letter from native Lakota chief Henry Standing Bear who asked if Ziółkowski would be interested in creating a monument for the native North Americans to show that the Indian nations also have their heroes. I rather like this digital study of Crazy Horse by Harvie Brown demonstrating the power and skill of man and horse.

Thunderhead Mountain in The Black Hills where the memorial is being carved is sacred ground to the Oglala Lakota people. The sculpture, as conceived by Ziolkowski will depict Crazy Horse riding a horse and pointing into the distance as shown in this model with the rock carving in the background.

Below we can see Ziółkowski with Henry Standing Bear discussing this remarkable artistic engineering project. 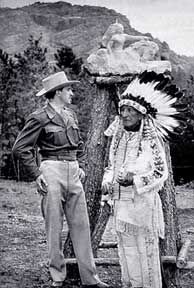 Korczak Ziółkowski's journey to arrive at The Black Hills to carve this incredible memorial on Thunderhead Mountain to undoubtably the most iconic of the Native American leaders is interesting and indicative of a man destined to have the strength to undertake the massive task.

Korczak Ziolkowski was born in Boston in 1908 to Polish parents but was tragically orphaned when he was only one and spent his childhood in a series of foster homes. He put himself through Rindge Technical School and became an apprentice to a ship maker in Boston. By 20 years he was carving in wood and making furniture demonstrating his innate artistic talent. By the 1930s Korczak was working as a professional artist and in 1932 he carved (using a coal chisel) his first marble portrait of Judge Frederick Pickering Cabot, who had inspired him as a child growing up in the rough neighborhoods of Boston.(Wikipedia) In 1939, Ziolkowski was hired as a sculptor's assistant by Gutzon Borglum on his Mount Rushmore project.

In the 1940s this remarkable artist sculpted a towering tribute to Noah Webster, the pioneer of American English spelling who is credited with creating the first American dictionary. Ziolkowski's statue stands in Blue Back Square in West Hartford, Connecticut alongside the public library named after Webster. 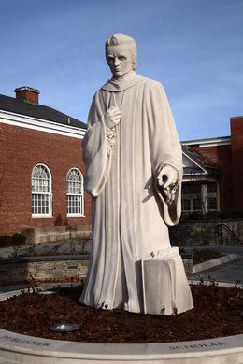 Ziolkowski commenced the Crazy Horse project in 1948 and 71 years later his dream continues to be constructed. Korczak married Ruth Ross who was passionate about art and together they raised 10 children and worked on the project. Together Korczak and Ruth worked on producing 3 books of comprehensive measurements to guide the continuation of the Mountain Carving in the event of Korczak's death.(crazyhorsememorial.org) When K died in 1982 having taken no money whatsoever for his work, Ruth took over the project as President and Chief Executive Officer of the Crazy Horse Memorial Foundation. On her death in manager.Ziolkowski continued his work until he died of acute pancreatitis at age 74 at the monument site in 1982. He was buried in a tomb at the base of the mountain. After his death, his widow, Ruth Ziolkowski, took over the project as director of the Crazy Horse Memorial Foundation.On Ruth's death in xxxx, the daughter Monique Ziolkowski has taken over as Mountain Carving Director.

As you can imagine it is not easy to carve a giant scupture on top of a mountain especially a sculpture planned to be 641 feet (195 metres) wide and 563 feet (172 metres) high. The carving, which is extremely complicated requiring skills in engineering, geology and art is being carried out by a special Mountain Crew who are experts in equipment operation, engineering and precision blasting - all according to the original plan as designed by Ziolkowski. (crazyhorsememorial.org). Here you can see the outline of the sculpture as it is to eventually appear. 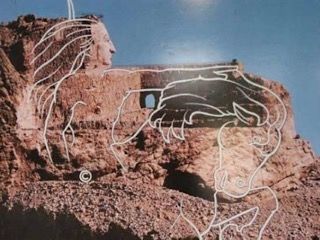 Some of the measurements. 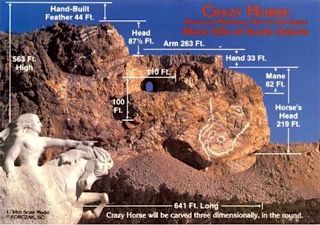 To give you an appreciation of the magnitude of the work look at the size of humans standing on the mountain. 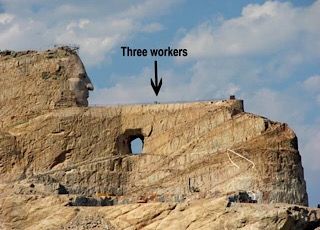 (Credit: Carpe Diem on the Road)

And what a magnificent location in recognition of the vision of two men: one a warrior protecting his people, the other a talented artist. 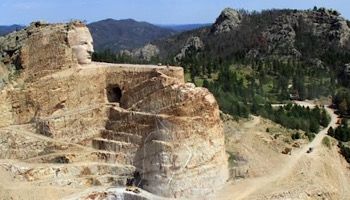 The head of Crazy Horse was completed in 1998 and has been dedicated. It is possible that it is the world’s largest sculpture of the human head, measuring approximately 87 feet (27 m) tall, more than 27 feet taller than the 60-foot faces of the U.S. Presidents depicted on Mount Rushmore. It is also claimed that the Crazy Horse Memorial as a whole will be one of the largest sculpture in the world when completed. (Wikipedia) 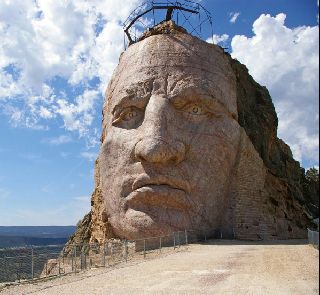 The memorial is funded entirely by private donations, with no assistance from the U.S. federal government. The memorial master plan includes the mountain carving monument, an Indian Museum of North America, and a Native American Cultural Center.The Crazy Horse Memorial Foundation regularly takes the lead in cultural, social and educational events, including the Volksmarch, the occasion on which the public is allowed into the actual monument grounds. The foundation generates most of its funds from visitor fees, with visitors numbering more than one million annually. (Wikipedia)

The monument has been the subject of controversy. In Ziółkowski's vision, the sculpted likeness of Crazy Horse is dedicated to the spirit of Crazy Horse and all Native Americans. It is well-known that Crazy Horse did not want to be photographed during his lifetime and is reportedly buried in an undisclosed location. While Lakota chief Henry Standing Bear believed in the sincerity of the motives, many Native Americans still oppose the intended meaning of the memorial. Opponents of the monument have likened it to pollution and desecration of the landscape and environment.(Wikipedia)

I will let you make up your own minds about this incredible carving.

Showcasing the beauty of the Australian Eucalyptus forests.