Before we journey back to California and meet a remarkable artist we welcome E.J.D. in Sydney - our latest subscriber. And now onto Carmel to meet Anne Bremer. 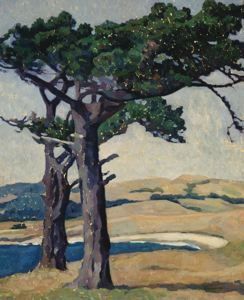 Carmel-by-the-Sea is a city in Monterey County, California, located on the Pacific coast, about 330 miles (530 km) north of Los Angeles and 120 miles (190 km) south of San Francisco.

Carmel was founded in 1902 and incorporated on October 31, 1916. Situated on the Monterey Peninsula, Carmel is known for its natural scenery and rich artistic history.2

This image of Carmel-by-the-Sea was taken in 1910.

In 1906, the San Francisco Call devoted a full page to the "artists, writers and poets at Carmel-by-the-Sea", and in 1910 it reported that 60 percent of Carmel's houses were built by citizens who were "devoting their lives to work connected to the aesthetic arts." Early City Councils were dominated by artists, and the city has had several mayors who were poets or actors, including Herbert Heron, founder of the Forest Theater, bohemian writer and actor Perry Newberry, and actor-director Clint Eastwood.2

In 1905, the Carmel Arts and Crafts Club was formed to support and produce artistic works. After the 1906 San Francisco earthquake the village was inundated with musicians, writers, painters and other artists turning to the establishing artist colony after the bay city was destroyed. The new residents were offered home lots – ten dollars down, little or no interest, and whatever they could pay on a monthly basis. 2

Jack London describes the artists' colony in his novel The Valley of the Moon. This is the front cover of his book but sadly I don't know the name of the illustrator. 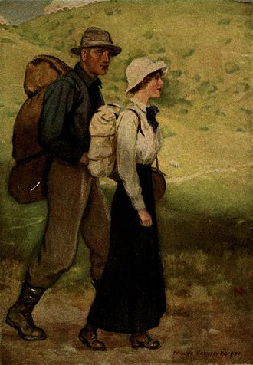 Below is her painting The Blue Bay of Carmel. Bremer had numerous solo exhibitions, including one in New York. 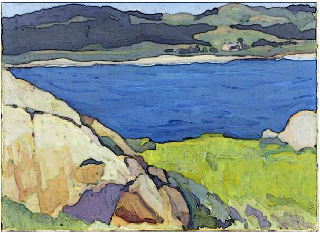 The Blue Bay of Carmel by Anne Bremer 4

Anne Millay Bremer was born in San Francisco on May 21, 1868, to upper-middle-class German-Jewish immigrants Joseph and Minna Bremer. In 1880-81 she traveled in Europe with her parents, and they brought back a cousin, Albert Bender, from Dublin, Ireland, to live with them and work for another uncle, William Bremer. She studied art with Emil Carlsen at the San Francisco Art Students League and with Arthur Mathews and others at the California School of Design, Mark Hopkins Institute of Art, receiving a Certificate of Proficiency in 1898. By the time she graduated she was on the board of the Sketch Club, an organization of San Francisco women artists, and she was its president at the time of the 1906 San Francisco earthquake. Under her leadership the Sketch Club produced the first major art exhibition in the city after the disaster and enlarged its membership to include men.2

Anne Bremer's paintings of nature and gardens have a delightful tonal vibrance to them where the forms especially the trees seem to dance on the canvas. 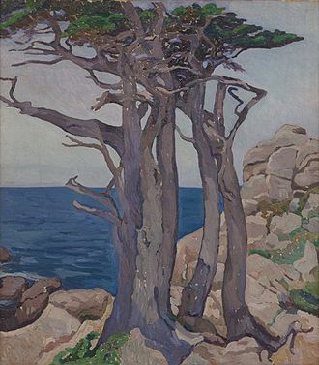 Surviving the earthquake Bremer:
lived in Berkeley during 1907, attended summer classes at the University of California, and painted a series of East Bay landscapes. That year she also began exhibiting in the new gallery of California artists in the Hotel Del Monte in Monterey. After two years back in San Francisco, she moved to New York by January 1910, where she studied at the Art Students League. She sailed to Europe in mid-April 1910 and traveled, primarily in Italy, then settled in Paris, where she remained until September 1911 and studied at the Académie Moderne and Académie de la Palette.2 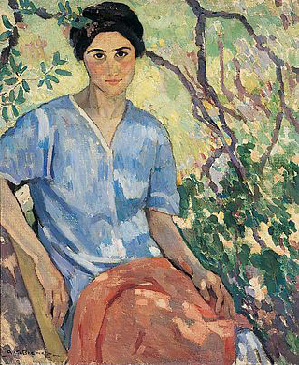 After returning to San Francisco she had her first solo exhibition at the gallery of Vickery, Atkins & Torrey in March 1912 and another at the St. Francis Hotel in November–December 1912. While painting in Carmel-by-the-Sea, California during the summer of 1912, she met and befriended the artist Jennie V. Cannon, who used her own studio-gallery to stage the first exhibit of Bremer’s work on the Monterey Peninsula and hosted an opening-night banquet in her honor.2

By 1913 her home and studio were in the Studio Building on Post Street in San Francisco along with Albert Bender and various other artists. She evidently played a leadership role in developing the building with spaces for artists to live, work and exhibit. In 1915 she had five works in the Panama Pacific International Exposition and received a bronze medal. Also in 1915, she was included in a three-person “Modern School” exhibition (with Henry Varnum Poor of Stanford and Jerome Blum of Chicago), at the Los Angeles Museum of History, Science and Art. Her work began appearing in California Art Club exhibitions that year. In 1916 she was elected secretary of the San Francisco Art Association, where she helped lead a major phase of growth in conjunction with the creation of an art museum at the Palace of Fine Arts. She had a solo show of 27 paintings at the Arlington Galleries in New York City in 1917 and participated in the Society of Independent Artists second annual exhibition in 1918. Below is Across Carquinez Straits (Northern California) painted in about 1916.2 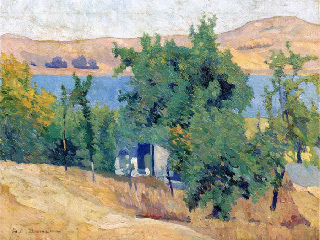 Across Carquinez Straits by Anne Bremer 5

Beginning in 1921 Anne Bremer was coping with leukemia. She gave up painting and turned to studying literature and writing poetry. She died in October 1923.

In terms of style:
Bremer’s work incorporates several elements associated with modern painting. Each of her paintings calls attention to itself as a flat surface holding an arrangement of colored paint, not as a literal representation or illusion of reality. Brushstrokes are broad and distinct from one another, sometimes with areas of unpainted canvas showing through. There is either very little suggestion of depth, or the perspective is distorted or ambiguous. Colors are bold and not always naturalistic. The subject might be figures, landscape, still life or a combination of these, but what was more important to the artist was creating a successful composition and emotional effect. Her works, while individualistic, are sometimes reminiscent of those of Robert Henri and Marsden Hartley, two of the major figures in modern American art. Hartley once wrote that, in his opinion, Anne Bremer was “one of the three artists of real distinction that California has produced.” 2 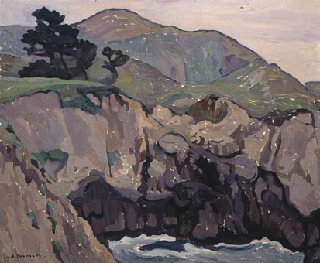 Following Anne Bremer's death in 1923 her cousin Albert Bender established several memorials: including an award for art students and the Anne Bremer Memorial Library at the San Francisco Art Institute, a marble chair in the Greek Theatre at the University of California, Berkeley, and an outdoor sculpture at Mills College. He also sponsored publication of a pair of limited edition books, The Unspoken and Other Poems and Tributes to Anne Bremer (Printed by John Henry Nash, 1927). Through Anne Bremer's influence and contacts with artists, Albert Bender was inspired to become an important patron of artists and art museums and a founder of the San Francisco Museum of Modern Art and Mills College Art Museum. Bremer and Bender are buried side by side in Home of Peace Cemetery, Colma, California. 2 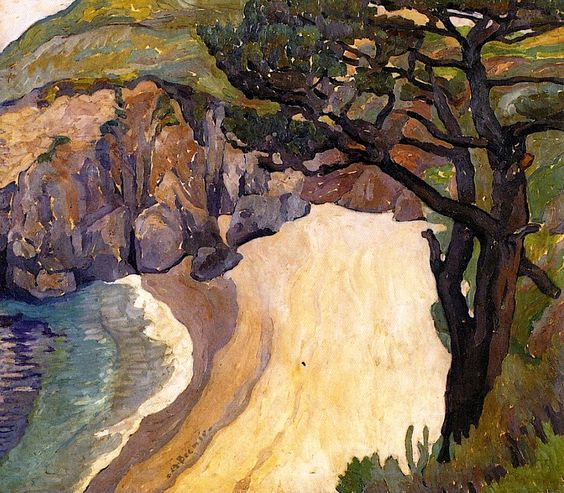 The Basilica of San Carlos Borromeo de Carmelo Mission known as "Carmel Mission" in Carmel-by-the-Sea, California is showcased today through a painting by Cyril Owen who has so beautifully captured the serenity of the place in his painting.