This wonderful Clockwork Lion statue stood in Trafalgar Square, London for just one day: a month after Lions were put on the endangered species list. The sculpture was then auctioned off to raise money for:National Geographic’s Big Cats Initiative, which aims to halt the decline of big cats in the wild.

The statue is constructed out of more than 500 different clock gears and parts. Sculptor Iain Prendergast said the statue’s body was made to look like “the inner workings of a clock”. Clock hands make up the lion’s mane while the eyes were made with small clocks. (Reuters)

Lions have undergone a catastrophic decline and are on the brink of extinction in all but the largest and best managed national parks. Just over a century ago, there were more than 200,000 wild lions living in Africa. Today, there are only about 20,000; lions are extinct in 26 African countries and have vanished from over 95 percent of their historic range. Though lions still exist in 28 African countries and one Asian country, only six countries are known to each contain more than 1,000 lions. Lions are currently listed as "Vulnerable" on the International Union for the Conservation of Nature (IUCN) Red List of Threatened Species. In West Africa, the species is now classified as "Critically Endangered. The species is threatened by the illegal bushmeat trade, habitat loss and fragmentation, unsustainable trophy hunting, and conflict with local people due to the real or perceived threat lions pose to livestock. (panthera.org)

Let's appreciate some images of lions through the eyes of artists. First some images from Henri Rousseau (1844-1910), a French post-impressionist painter in the Naïve or Primitive manner.

These majestic creatures below were painted by William Huggins (1820–1884) who was an English artist, from Liverpool, who specialised in drawing animals.

Huggins was a member of the Liverpool Academy of Arts. He enjoyed visiting Wombwell's Travelling Menagerie, an animal circus, and the Liverpool Zoological Gardens. Huggins has been compared to fellow Liverpool artist George Stubbs whom we have discussed in a previous blog.

Tigers are perhaps the most iconic cat species in the world, next to the African lion, and one of the most beloved animal species worldwide. And yet, despite the respect, admiration and fear they inspire, tigers are endangered and disappearing from the wild at a rapid clip. There are six subspecies of tiger, including the more familiar Sumatran Tiger and Bengal Tiger, and some are more threatened than others. But the tiger as a species is in danger everywhere. Threats include a loss of habitat, but also they are hunted for their skins, and for parts of their bodies used as painkillers and aphrodisiacs (though there is zero scientific evidence that any part of a tiger has any medicinal properties). Though protected through CITIES, the black market trade in tigers (both alive and in pieces) is thriving. Today, the captive tiger populations for several subspecies outnumber the wild populations. Without more stringent protections and better enforcement, these big cats may disappear from the wild entirely.(treehugger.com)

Below is a watercolour painting by Matthew Gibson where he has portrayed the magnificence of the endangered Bengal tigers. 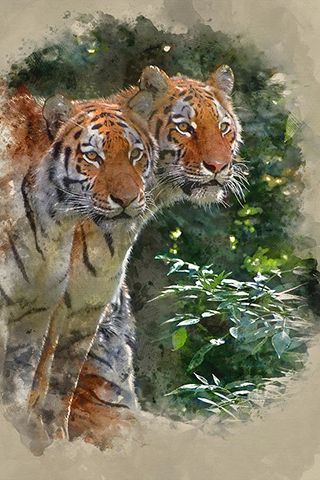 The last cat on our list is the world's fastest land animal -- but it still can't outrun the impacts of humans on its environment. The Cheetah has been listed as vulnerable to extinction, and has disappeared entirely from many of its former ranges. Once found throughout Africa and the Middle East, the cheetah is now primarily relegated to one small patch in Iran and fragmented areas of Africa. For thousands of years, cheetahs were tamed as hunting animals and pets, and some kings or emperors would keep a thousand cheetahs at a time. But because cheetahs need large stretches of open land to be able to hunt, the impact of human encroachment, as well as hunting by humans for their furs, has taken its toll. Only around 7,100 cheetahs remain in the wild in twenty-five African countries, and cheetahs may be well on their way to the endangered species list.(treehugger.com)

Lucie Bilodeau was born in Montreal, Canada, in May 1967. She now lives with her husband in the United States, in Massachusetts, where she paints full-time. The painting of the little Cheetah cub below is one of her wonderful creations. 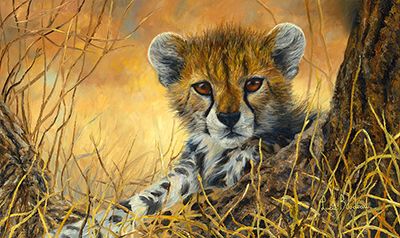 You will notice that I am trying out some different ways of presenting the information in the blog. I welcome feedback especially with the effect of the different coloured backgrounds and print. Please let me know if you find the texts more intersting and easier to read or more difficult.

Remembering the 11th November -Armistice Day- with Blood Sept Lands and Seas of Red by Paul Cummins at Tower of London.