Ben Quilty is one of Australia’s most talented artists and, from all accounts, one of the nicest people you could meet. I mention the latter because so many artists are known to be a little difficult to get along with - some of the time!

Quilty won the Doug Moran Portrait Prize in 2009 for a portrait of another beloved Australian - rock singer and songwriter Jimmy Barnes. 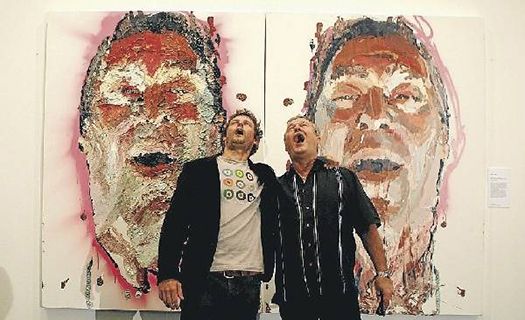 Ben Quilty went on to win the much-coveted Archibald Prize in 2011 for a portrait of the late artist Margaret Olley. More on this in another post coming up as Ben Quilty and Margaret Olley had a wonderful friendship which deserves to be explored separately on another day. 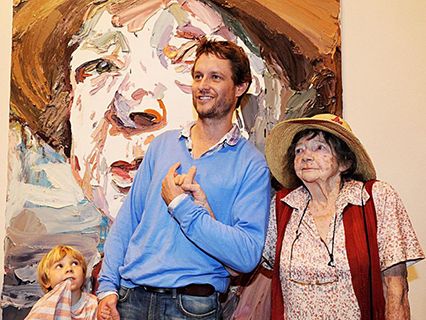 Ben Quilty paints both portraits and landscapes which have become acclaimed internationally.

Working in a style that remains both highly expressive and naturalistic, Quilty aims to delve into the emotional qualities of places and people through his gestural application of paint. His use of visible brush marks recalls the techniques of artists such as Lucian Freud and Frank Auerbach, though remains distinctive in Quilty’s vivid use of spectral color.3

Below on the left is one of Quilty's "landscapes", this one done in his "Rorschach" which exploits the concept of a mirror image.^ The painting was done as a response to an early Australian painting done by H. J. Johnstone in 1880.

^More on Quilty's "Rorschach" style in a future post.

Quilty grew up in Sydney's north-west, where car culture was strong, and found early-career success with paintings of Holden Toranas.

In 2011 Ben Quilty became a War Artist for the Australian Defense Force stationed in Afghanistan. It is in these portraits we see the strong relationship Quilty develops with all his subjects; he creates connections which ensure that the truth of their stories will be told.

Here are some of his paintings from Afghanistan where we can see in the figures the struggles faced by service personnel in the battle arena and back home.

When I see these portraits I need to borrow an expression from an article I have recently read on the English war artist Paul Nash, published by the Tate Gallery (London) and that is: The Landscape of Mortality.

Ben Quilty, with the strength of his vibrant brush stokes, which form into a textured image, creates what I would like to term Landscape Portraits where the topographical features of the country and the very ground on which they walked is engrained in the flesh of the subject.

This series of works resulted in a touring exhibition called After Afghanistan.

I quote from an interview with Ben Quilty to gain a little insight into how this experience affected him.

It was not so much his time in Afghanistan that left an impression, but the experience of working with the soldiers who sat for him after returning from Afghanistan, trying to live normal lives at home. “To then watch them try to struggle to come back and fit in, and drop, fall, crashing down to the earth with Post Traumatic Stress Disorder is very crushing and confronting.” 6

There can be no doubt that Ben Quilty is set on a mission to challenge our thoughts and feelings about confronting issues such as mortality. He also portrays his interpretation of the Australian National Identity, Australian Masculinity, European Settlement and the Treatment of the Aboriginal Peoples.

Tomorrow we are going to see some of his works that are part of his Rorschach series. Yes, Ink Blots, for those of you familiar with this psychological testing technique.

For those of you interested in the Australian Impressionist John Russell here is an excellent article on Russell written by Sarah Turnbull, published in Good Weekend (The Age) and available online at The Sydney Morning Herald