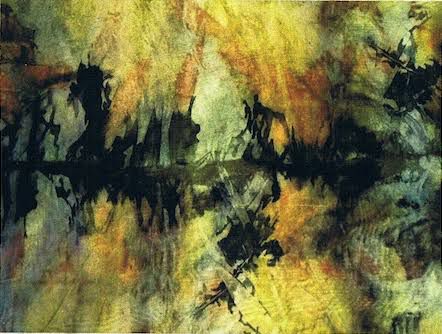 Reading and being inspired by Julie's blog on Bruno Torfs' Art and Sculpture Garden I thought it appropriate to return to consider Art as Therapy.

As you all know Australia has and continues to experience severe bushfires that have destroyed a large number of homes, caused several deaths and wiped out millions of hectares of Australia's forests and it is estimated over a billion native creatures.

The people who have been directly affected will rebuild their lives but they will need a great deal of help and some of that help will come through art therapy.

Already artists are getting onboard and offering to assist in the healing process. One such artist is Barbara Pritchard who knows first hand what it is like to be at the centre of a bushfire. Broede Carmody in 'The healing can start': Upper Murray artist wrestles with fire's aftermath tells a little of Barbara's story and how

As the smoke rolled down the hill of her beloved valley, Barbara Pritchard thought to herself: I've lost everything.

The artist and her husband threw a few belongings in a van and sought refuge in a nearby town. It was the day before New Year's Eve. The communities huddled around the Upper Murray were under attack. (Broede Carmody, smh.com.au)

The Pritchard's were lucky in that they only lost a small cottage on their property with about 10 of Barbara's paintings.

Pritchard said. "I had come to terms with losing everything. When I found out it wasn't all lost, it was a bit confusing. Which seems strange. And of course, with the confusion came a feeling of ecstatic gratitude. It's hard to describe."
(Broede Carmody, smh.com.au)

Pritchard says she plans to run workshops for local children affected by the fires. She has a background in nursing and midwifery and believes art is one of the ways her community can heal.

"We can do works on paper from charcoal that we scavenge and put them up, possibly in an exhibition or for sale," she said. "Something like this really transforms your life as well as your practice.

"There's a lot of emotions that can be suppressed in crisis situations. Art can draw us out of those emotions, especially children who may not have always been included in the drama or the conversations but are feeling stress from the adults around them." (Broede Carmody, smh.com.au)

Barbara Pritchard lives in Walwa in the foothills of the Snowy Mountains where she has continued her arts practice over 30 years. Her textiles are in the Victoria Museum and private collections throughout Australia, Europe and U.S.A. She was an Award winner in the 2016 Wool Museum Scarf Festival.

Art Therapist Michelle Atlas, is a lecturer in art therapy at La Trobe University and agrees that art will help the children who have experienced the bushfires heal. She has previously worked with children affected by bushfires north of Melbourne.

"It is so powerful to create something out of what was destroyed," she said. "Sometimes words aren't dimensional enough to convey a feeling or experience."
(Broede Carmody, smh.com.au)

Below is Michelle with her dog Ruby who attends the art therapy sessions. 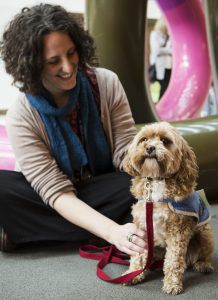 It is people like Barbara Pritchard and Michelle Atlas who will ease the pain and put the children on the path to recovery. Let's hope that the adults can also be engaged in activities that help them recover.

I will be keeping an eye out for more information about the art therapy classes.

In November 2019 the World Health Organization released a report on The Effects of Art on Health concluding that there is a major role for the arts in the prevention of ill health, promotion of health, and management and treatment of illness across the lifespan. Health Evidence Network synthesis report 67
What is the evidence on the role of the arts in improving health and well-being? A scoping review.

Art therapy isn’t a new field. The journal Art Therapy for instance, has been around since 1969. But it’s taken fifty years for the idea that art could be used as medicine to catch the attention of the World Health Organization (WHO). This report demonstrates that a leading global health power has finally taken notice. (www.inverse.com)

Celebrating Chinese New New Year with all our friends and family.